Renton is extremely proud of two things. The one is its football prowess (of 1888). The other is Tobias Smollett. This tall Tuscan column with a stone urn on top stands in his honour in the Main Street before Renton Primary School and alongside the war memorial. A modern wall wall of remberance curves behind them as the backdrop.

Scottish poet and author Tobias George Smollett was baptised on the 19th of March, 1721. He died on the 17th September. 1771.

Tobias Smollett was born at Dalquhurn, now part of Renton in West Dunbartonshired. He was the fourth son of Archibald Smollett of Bonhill, a judge and landowner who died about 1726, and Barbara Cunningham, who died about 1766. He was educated at the University of Glasgow, where he qualified as a surgeon. Some biographers assert that he then proceeded to the University of Edinburgh, but left without earning a degree. His career in medicine came second to his literary ambitions; in 1739 he went to London to seek fortune as a dramatist. Unsuccessful, he obtained a commission as a naval surgeon on HMS Chichester and travelled to Jamaica, where he settled down for several years. In 1742 he served as a surgeon during the disastrous campaign to capture Cartagena. [Wiki].

On his return to Britain, Smollett established a practice in Downing Street and married a wealthy Jamaican heiress, Anne "Nancy" Lascelles. They had one child, a daughter Elizabeth, who died aged 15 years about 1762. [Wiki].

Smollett's first published work was a poem about the Battle of Culloden entitled "The Tears of Scotland", but it was The Adventures of Roderick Random which made his name. His poetry was described as "delicate, sweet and murmurs as a stream." [Wiki].

Smollett used place and personal names in his novels that sometimes sound strangely familiar. An example from Humphrey Clinker is where he refers to a legend about the fairies dwelling "in a hole of Kairmann, a mounting hard by". Is this actually Carman Muir with Carman Hill rising above it?

He pubished poetry, translations, non-fiction and plays, but today we most familiar with his novels. The include:

1748: The Adventures of Roderick Random

1751: The Adventures of Peregrine Pickle

1753: The Adventures of Ferdinand Count Fathom

1762: The Life and Adventures of Sir Launcelot Greaves

1769: The History and Adventures of an Atom

1771: The Expedition of Humphry Clinker

The inscription is in Latin. Having died in died near Livorno in Tuscany in Italy, this perhaps not that out of keeping. Here is a translation in English [WDC].

STAY, TRAVELLER!
IF ELEGANCE OF TASTE AND WIT, IF FERTILITY
OF GENIUS, AND AN UNRIVALLED TALENT IN
DELINEATING THE CHARACTERS OF MANKIND,
HAVE EVER ATTRACTED YOUR ADMIRATION,
PAUSE A WHILE ON THE MEMORY OF TOBIAS
SMOLLETT, M.D., ONE MORE THAN COMMONLY
ENDOWED WITH THOSE VIRTUES WHICH, IN A
MAN OR A CITIZEN, YOU WOULD PRAISE OR
IMITATE:

WHO,HAVING SECURED THE APPLAUSE OF
POSTERITY BY A VARIETY OF LITERARY
ABILITIES AND A REGULAR FELICITY OF
COMPOSITION, WAS BY A RAPID AND CRUEL
DISTEMPER SNATCHED FROM HIS WORLD IN
THE FIFTY-FIRST YEAR OF HIS AGE. FAR, ALAS,
FROM HIS COUNTRY, HE LIES INTERRED NEAR
LEGHORN IN ITALY.

IN TESTIMONY OF HIS MANY AND GREAT
VIRTUES THIS EMPTY MONUMENT, THE ONLY
PLEDGE, ALAS, OF HIS AFFECTION, IS
ERECTED ON THE BANKS OF THE LEVEN,
THE SCENE OF HIS BIRTH AND OF HIS LATEST
POETRY, BY JAMES SMOLLETT OF BONHILL,
HIS COUSIN, WHO WOULD RATHER HAVE
EXPECTED THIS LAST TRIBUTE FROM HIM.

TRY AND REMEMBER THIS HONOUR WAS NOT
GIVEN ALONE TO THE MEMORY OF THE
DECEASED, BUT FOR THE ENCOURAGEMENT
OF OTHERS. DESERVE LIKE HIM AND BE
ALIKE REWARDED.

Also see SMOLLETT FAMILY. That clarifies which Smollett is which. 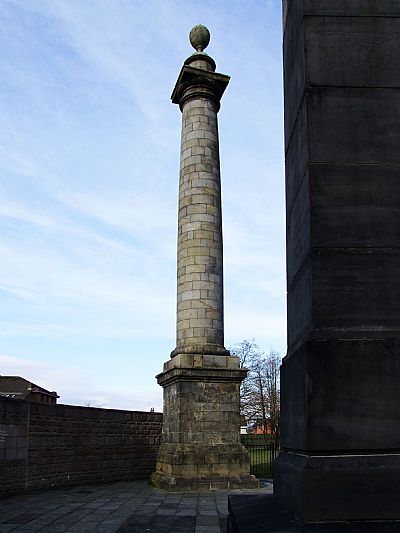 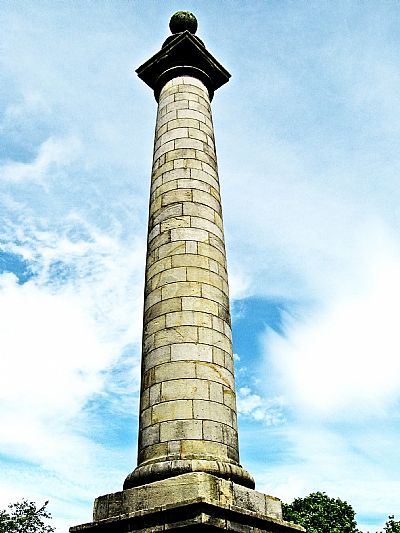 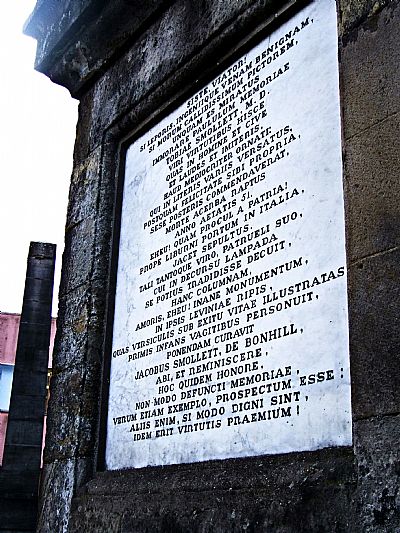