ACCESS : Part of what was this shipyard is easily accessible, but little is recognisable as such.

///wished.files.tribal This is a point within the Clydeside Community Park and a good place to consider the shipyard that preceded it.

William Beardmore is best known for the construction of the Dreadnought at Dalmuir, but long before that he began manufacturing armour plating and guns at his Parkhead works. In 1899 he extended into shipbuilding. This coincided with naval rivalry between Britain and Germany, which added to the requirement for new warships. In 1900, Beardmore took over Robert Napier's old yard at Govan and began the construction of warships and merchant ships.

Although the Govan yard gave Beardmore an immediate start in shipbuilding, it was too small for his requirements. In 1900, he purchased a large tract of ground at Dalmuir to the immediate west of John Brown's Clydebank shipyard. Here, Beardmore laid out the most extensive and well-equipped private shipyard and marine engineering works in the UK. This was an ambitious development given Beardmore's modest track record in shipbuilding. Nevertheless, the Naval Construction Works, as the yard was named, opened with the launch of the battleship Agamemnon for the Royal Navy in June 1906..... [WDC].

From the time of the build up to the First World War, and then during it, there was a great expansion in work at the shipyard. In addition to shipbuilding and marine engineering, Beardmore created new facilities for the construction of submarines, aircraft, airships and tanks as well as mines, guns and fuses for shells.

Beardmore's contribution to the Royal Navy included the battleships Conqueror, Benbow and Ramillies, as well as Argus, the world's first flush-deck aircraft carrier, and many cruisers, destroyers and submarines. Over 480 aircraft were constructed at Dalmuir as well as parts for two rigid airships although erection of these plus two others was concentrated at new Beardmore works at Inchinnan. [WDC].

With the end of the First World War came the challenges of keeping up the production pace. Much investment was put into new facilities and innovations, but this was not to prove fruitful. The shipbuilding boom was over.

National Shipbuilders Security Ltd was formed to try to keep up production and bought Beardmore's yard. It was only partially successful and the yard closed in 1936.

But William Beardmore had had a very distinctive career. Dalmuir was only one of his industrial production works, yet it is one that sustained and almost created the Dalmuir that we see today.

The following maps and aerial photograph are reproduced with permission of the NLS and NCAP. See end for details. 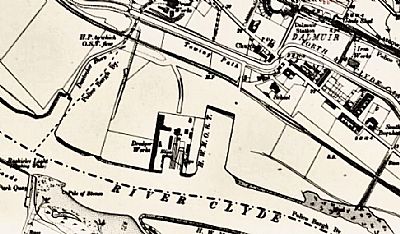 This OS map dates from 1912. Dumbarton Road, canal and railway line can be seen. The shipyard is fairly substantial and there is a basin. 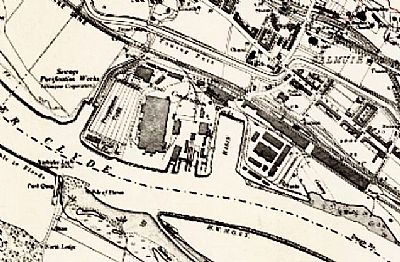 NATIONAL LIBRARY OF SCOTLAND : https://movingimage.nls.uk/film/0750 This is a film entitle ROMANCE OF ENGINEERING about this shipyard and produced for it.