ACCESS : The walk here is relatively easy, The castle sits beyond the pond in a wooded area that is relatively flat. While it is generally safe to enter the structure, it is advisable to check for loose material including vegetation.

Kilmahew Estate with all its features is today within Argyll and Bute, but was historically within Dumbartonshire County and so retains a valid place within the West Dunbartonshire of today.

Today better know for the modern concrete ruins of St Peter's Seminary, the gardens turned wilderness of the estate hold another surprise. This is Kilmahew Castle, a defensive tower house. It has returned almost to that basic shape although various additions had been made to give it a more “Gothic” look. One can still enter at the lower ground floor, but at some point the main floor would have been at the one above and the meagre remains of an elegant stair can be seen on the south west corner. It has been supposed that the pointed arches and grand south facing window were taken from earlier churches. The latter has been filled in with masonry for stability and that is what we see in this photograph, although instead of stone tracery we see rampant creeper, which has been cut short to limit damage by its growth.

Nearby was Kilmahew House, (almost all of which was demolished for the Seminary) and it appears that the changes to the Castle were made for the occupants of the house as a sort of usable folly within the grounds.

Canmore tells us  that the ruins of Kilmahew Castle are believed to have been built partly by George Napier from about 1694 to 1744. It is a simple keep as found at that time. During the 19th century the south and west walls were rebuilt, with a view to turn the castle into a modern mansion, but this work was never completed. 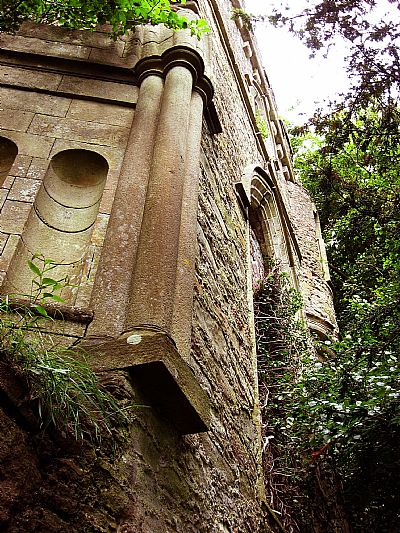 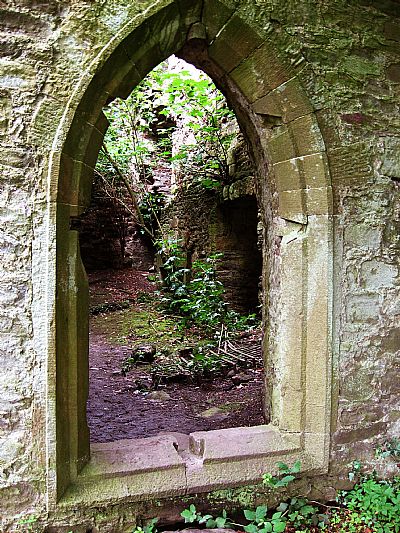