The first thing that you notice when you go up Golden Hill is that it has tremendous views. That makes for a good public park, but more significantly, it also provides (or did before vegetation and modern development got in the way), visual contact with two other major forts. Those were Old Kilpatrick Fort, roughly to the west, and Castle Hill Fort, to the east.  An intermediate forlet was built at Cleddans, (near the golf course). A combination of visual signalling and patrolling troops along the Wall would have provided continual communications and control.

The fort itself is no longer visible below the turf; that is except for a small section of stone of a rampart. The Clydebank Local History Society and the local community have however been very resourceful and laid out the walls of the fort in the grass. They have overplanted that with wildflowers and had the Council avoid mowing that layout. Thanks to them you can now see the layout and walk around most of the fort walls.

Small Roman centurions will find the themed playpark a great place to defend the Empire. Or perhaps challenge it. 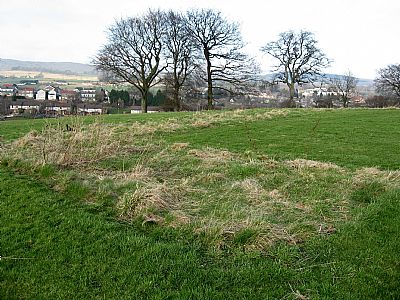 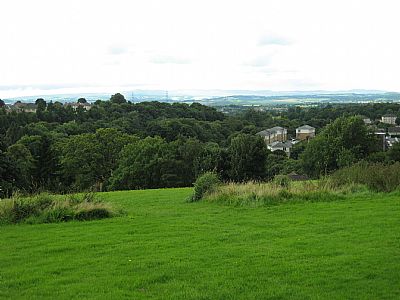 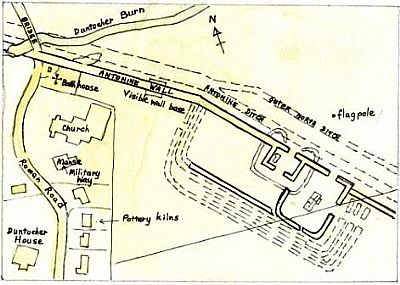 This layout sketch was produced by the late Cathy Ward for the Clydebank Local History Society. It is orientated north and if you get your bearings by first noting the church, you can begin to identify each element. The Antonine Wall comes across the site from the north west to the south east. The small section of exposed wall now visible is indicated. You can then make out where the main and secondary defensive ditches were - making the most of the steeper northern edges of the hill. And from that the constructed the walls of the fort and other earthworks. [© CLHS].

Compare this to the Google Maps satelite view that follows. 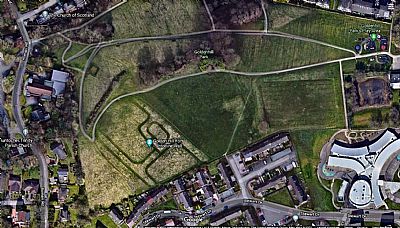 The extent of urban development is most evident to the south (see the diagonal line in the map above). This has been taken from Google Maps satelite view & is used within their conditions. Google © 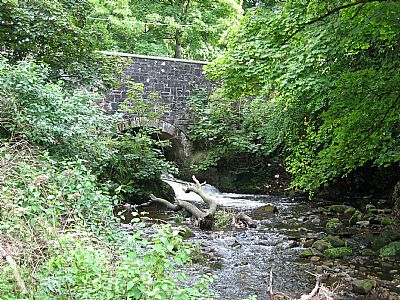 On the west slope of the hill a Roman bath-house was discovered near the Duntocher War Memorial. There is a bridge over the Duntocher Burn close by. Although called Roman Bridge, it is actually a much later construction. The original bridge may have been built by Romans, but despite its name, the current bridge dates from the 18th century and was rebuilt in 1943 to repair damage sustained in the 1941 Clydebank Blitz of the Second World War. An altar to Jupiter was found close to the fort, and a statue of a water nymph was found on the site of the bath-house. 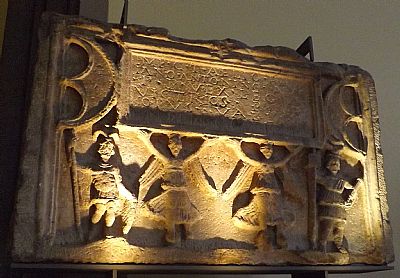 This distance slab is on display in the Huntarian Museum, University of Glasgow. It was found near Duntocher Fort in 1812. It has two winged mythological females alongside Roman soldiers and is isncribed  IMP C T AELIO HADRIANO ANTONINO AVG P P VEX LEG VI VICTRICS P F OPVS VALLI P MMM CCXL F. This means “For the Emperor Caesar Titus Aelius Hadrianus Antoninus Augustus Pius, father of his country, a detachment of the Sixth Victorious, Loyal and Faithful Legion completed the rampart work [over a distance of] 3240 feet”.