ACCESS : Easy access by car, on foot or by bicycle along Woodyard Road.  The woodyard remains only as a few reminders of its past.

This is commonly known as Woodyard and the name of the road reinforces this, but some records refer to it as .Alex Mcmillan and Sons Shipyard.

If you look at the W. L. Leitch etching of 1847, you will see lumber being offloaded from barges. This was earmarked for shipbuilding. The quayside is rather basic and appears to be little more than the same logs simply laid level. There is a hoist and horses for drawing carts and towing logs.

The town and castle of Dumbarton from the Leven.

After: William Leighton Leitch; Print made by: James Duffield Harding. 1847.

© The Trustees of the British Museum.

We are able to pick the wood yards early days when we come across William McLeod going into partnership with his brother-in-law John McAuslane as Saw Millers and Timber Merchants. William was the 7th of 8 children and born in Renton in 1841. Given this date and considering the picture above, there must have been such activities on this side of the river well before then.

William was apprenticed to David Auchenvole, a joiner, and this apparently gave him grounding for his future career. He married Mary McAuslane in 1829. They had 7 children (including another William). Starting out in Renton they and their family were to move to West Bridgend.

Their business was to include the construction of small wooden coastal vessels and a wooden paddle steamer called the "Emperor".

It is thought that much of their timber stock was lost or damaged in a storm. Logs were stockpiled within pens set into the mudbanks after being floated across the Clyde. (Some such pens are still evident as poles in the mud elsewhere on the Clyde). You can imagine the impact of a high tide and storm surge on this stretch of the Leven.

The firm was severly financially dented. It was at this point that the foreman, Denny, evidently offered to buy them out. Canmore refers to Denny leasing the land. Whichever is correct, this resolved the financial challenges of the firm and saw the birth of another.  [RR]. 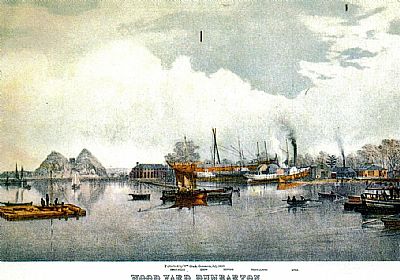 The yard is much more developed and active than the preceding picture shows (although that engraving may have been done well after the artwork on which it was baed). Print in collection of Rod Richard. 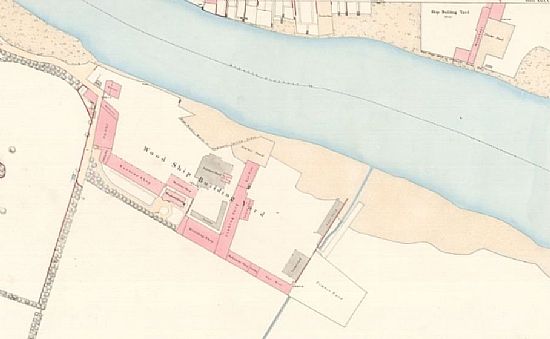 The OS map of 1859 shows it as Wood Shipbuilding Yard with a comprehensive arrangement of buildings. These include a paint shop and stores; offices adjoining a smithy; a finishing shop and a machine shop; another machine shop and a furnace shed and yard; another smithy and a moulding and a jobbing shop; a joinery shop and saw pits. The latter was adjacent a timber pond to which heavy lumber was floated closer to the works. A small water course ran along the south eastern boundary and appears canalised as a resource. A timber yard extends across this. All this was defined on the map by the High Water Mark of Ordinary Spring Tides. As the main feature seen on approach from the road was Woodyard House. It is still there - subdivided as semi-detached residences and known as Woodside House and Levenside. Contrary to the impression many people have, this wood ship building yard was not at Sandpoint which is more across the promontory of the Leven and Clyde. That is with the exception of the works woodyard which extended a bit into that area.

Canmore tells us that it is known to have been leased by the Denny Brothers in 1845, having previously been their father’s old premises. It was fitted out for the building of iron steamers and at this time employed 14 men. In 1849, now William Denny and Brothers Ltd., they moved from the west bank of the river to the east bank, occupying the newly established Leven Shipyard (NS47SW 91). Their former premises are depicted ‘(Disused)’ on the 2nd edition of the OS 25-inch map (Dunbartonshire 1898, Sheet 022.06). By the publication of the 3rd edition map the original site of Wood Yard is depicted as a Timber Yard and the western extension a Lifeboat Building Works and Launch Building Engineering Works, utilising the original shipbuilding yard buildings. 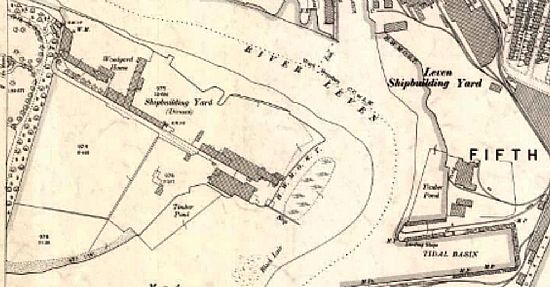 Some decades later and that original yard had spread towards the confluence with the Clyde. It was now able to build larger and more sophisticated ships. Of those the Cutty Sark is their crowning achievement.

The Sandpoint Marina currently occupies that later section towards the Clyde. Most of the original site is now landscaped with lawns, with Woodyard Road and part of the Posties Park sports fields over the western edge.

NATIONAL LIBRARY OF SCOTLAND (NLS) : The maps are: Reproduced with the permission of the National Library of Scotland.

WIKIPEDIA : https://en.wikipedia.org/wiki/William_Leighton_Leitch This gives details of W. L. Leitch who was the artist of the picture used above.