BOWLING HARBOUR SWING BRIDGE, At the western end of the Forth and Clyde Canal, Bowling.

ACCESS :  To be made accessible for cyclists and integrated into the cycle route. The whole area is accessible on foot at the lower level. There is nearby parking.

In this section we are discussing the railway bridge. See FORTH AND CLYDE CANAL for the footbridge.

The railway, railway viaduct and swing bridge are integral parts of the basin at the western edge of the Forth and Clyde Canal as it reaches the Clyde. Bowling Harbour sits to the one side serving sea going craft. And below it is the canal basin.

The swing bridge and viaduct loom over the waterways below and are to some degree intertwined. Even though the railway no longer uses this route, you can still appreciate how each of these elements are combined into a combination of sturdy arches above canal and docks. 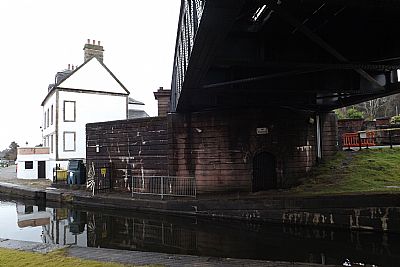 This view is under the bridge looking west. The extension to the left & the gate into the heavy pier are all that remains of the operating mechanism at this point. The RailScot link below has a photo from 1896 showing the signal / control box and gantry that were mounted above this. 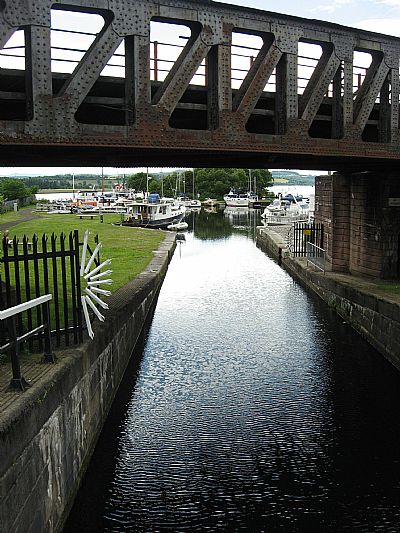 The bridge with the canal as it turns towards the lower canal basin.

The viaduct carried two lines. The bridge itself swung with the power of a massive hydraulic system controlled from a signal box above. That control point no longer exists, but some of the hydraulic system remains, albeit in a much decayed state, below the floor of one of the arches. Although it is mostly hidden, you can see through to it and a brief illustrated description.

CANMORE tells us that This railway swing bridge was constructed in about 1896 by the Lanarkshire and Dunbartonshire Railway Company. This website has quite a bit of detail and photos both past and present. ...This Caledonian Railway swing bridge has massive stone abutments. The puffers, coastal cargo vessels, using Bowling Harbour, were supplied with coal brought by this railway, while timber was transported back by this route.

During 2021 work was underway to convert the bridge to cycleway. This includes new cycle ramps and stairs. This now provides a continuous cycle way over canal basin while connecting back to the towpath east and old railway route west. It allows the option to go down to the canal and basin level for the views and refreshments. 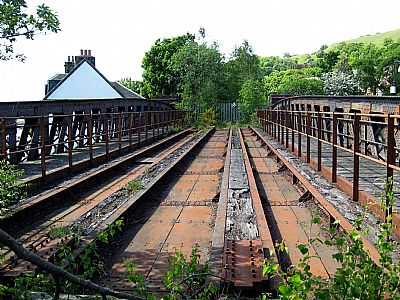 For many years the bridge has looked like this. It is now restored and transformed into a vital part of the cycle route.