ACCESS : Easily reached to the side of the Municipal Buildings

These three cannon are reputed to have been presented to the town of Dumbarton by Provost McFarlan. He was a lawyer who had served as Provost of Dumbarton for an extraordinary period of 13 years. The exact circumstances of his presentation are unclear although he was thought to have done so at the time of the building being opened, or as has been suggested, when the nearby sheriff's court was built, and subsequently moved here..

These are believed to have been brought back from the Third Anglo-Burmese War of 1885 / 87 as trophies.

These three slender cannon do not have their own mountings and are hardly the grand design as are to be found on either side of a doorway. They have instead been mounted at equidistant specings on metal spikes alongside the College Bow at the side of the Municipal Buildings. It takes little imagination to realise why they have be cynically called McFarlan's Hurdles. 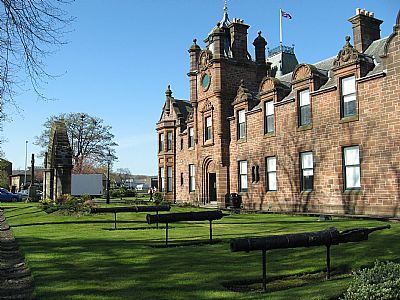 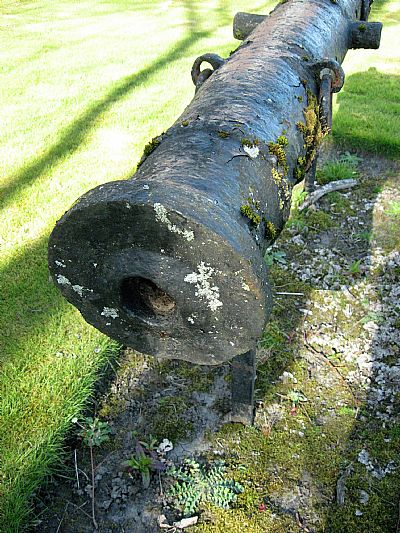 Only a very short distance from here, at the front of the Municipal Buildings, stands a statue of Peter Denny who led shipbuilding on the Leven. One of his commercial interests was the British & Burmese Steam Navigation Company and this led to the Denny Shipyard building ships for the Irrawaddy Flotilla Company. While McFarlan may have had the cannon brought here, you begin to see a broader local connection with Burma. Denny had co-founded the The Irrawaddy Flotilla Company with Robert Findlay to serve troops and then the local commercial market. It was managed by P. Henderson & Company from Glasgow.

While we remain unsure of the exact provenance of the three cannon in Dumbarton, they have led to this unexpected and almost forgotten connection between Dumbarton and Burma. The links below will take you further.