ACCESS : It is easy to visit the site. But there is nothing left to see.

///scan.speak.blitz The site is vast. These very ironic random generated ///what3words indicates the location of the iconic Singer factory tower.

Clydebank exists because of two major industries – shipbuilding and sewing machine manufacturing. We can still make out remnants of the former. Although the latter was very extensive and just west of Kilbowie Road, there is nothing left to indicate it ever existed. Almost.

The extensive site is now the Clydebank Business Park entered from Kilbowie Road. The iconic clock tower was between what is now Symington Drive and Whitworth Drive.

Go almost anywhere in the world and you will be able to find a Singer Sewing Machine. This is particularly true in those countries where home crafts are an important part of the economy. These need hard wearing, dependable and easy to use and repair machines. The older models remain the machines of choice simply for those reasons.

Isaac Merritt Singer was known as strolling player, a theatre manager, an inventor, and a millionaire. A very versatile and extraordinary man. In 1851 he presented to the world what was then the best sewing machine available and his industry was to set off on an extraordinary trajectory.

Singer's improvements on the design met the demand of the tailoring and leather industries and subsequent for a heavier and more powerful machine .consolidated patents enable him to extend to mass production. By 1860 the Singer Sewing Machine company was the largest of its type in the world..

By 1867 it was felt that the demand in the UK was sufficiently high to open a local factory. Glasgow was an obvious choice of location because of its iron industry and cheap labour. The choice may also have been influenced by the general manager of the US company, George McKenzie, who had Scottish roots.

At first the company leased land in Glasgow close to Queen Street Station. This utilised parts shipped across from the US. Demand increased dramatically and in 1873 a new larger factory was opened near Bridgeton Cross. Even with a workforce of over 2000, this Scottish factory could not meet demand.

In 1882 the new factory in Kilbowie at Clydebank was started with George McKenzie officiating at the ceremony.

Even then it was the largest of the Singer Sewing Machine factories and over time grew substantially even larger. It was so large that it had its own railway station and several miles of railway track. It was ahead of its time being one of the first such factories to be designed to be fire proof and to have a sprinkler system. Rising out of the centre was the iconic clock tower with its large clock faces and “SINGER” visible for miles around.

Unlike the neighbouring industries, particularly shipbuilding, it survived the Blitz almost unscathed, but post-war economic conditions meant that its sales slumped and it was closed in 1980. 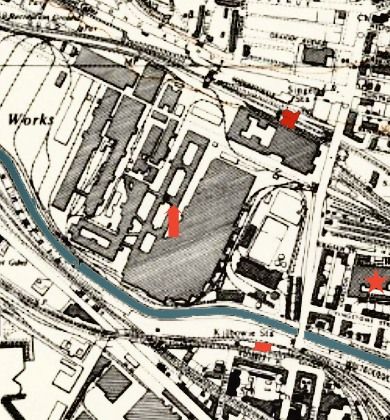 This is an extract from a 1857 OS map (see details below). It has been overmarked to help get your bearings. The Canal is in blue. The Singer Station is in red at the top (north). This still exists in altered form. The Kilbowie Station south of the Canal is also in red. This no longer exists. The nearby ironworks is marked with a star. The iconic Singer clock tower is marked with a red arrow. 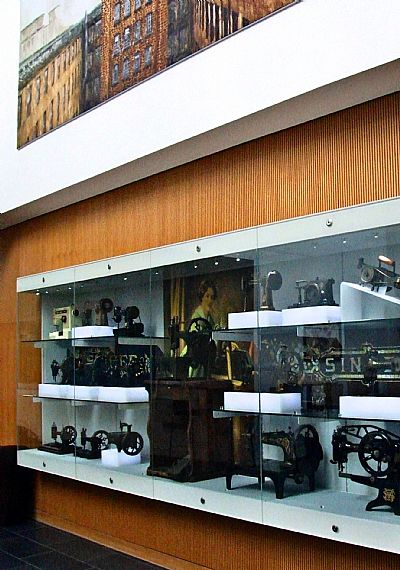 The museum at the Clydebank Town Hall has a display of Singer Sewing Machines.