Sitting within a cluster of trees in Levengrove Park is the ruin of a small church. This was originally built as a medieval parish church, but much altered and rebuilt in the 19th century. It has recently had the benefit of the improvements across most of the park, itself being cleared of invasive vegetation, stablisation and a low protective wall.

To see this church in context, we need to consider the extent of the Parish of Cardross. Joseph Irving tells us that "Cardross" may derive from Caer-ross, meaning "castle point" or "point of the moorish ridge" which he attributes to the point of land opposite Dumbarton Castle upon which the parish church stood in old times and to the physical characteristics of that point of land. What became the Parish of Cardross stretched from here to Craigendoran just before modern day Helensburgh, and northwards to include Renton. This therefore was a small yet important centre of that parish.

The Ancient Monuments website tells us that The earliest reference to the church of Cardross occurs in a 13th century charter whereby the Earl of Lennox granted the income to the Bishop of Glasgow (1208-33). In the early 14th century this was the parish church for Robert I's manor nearby at Cardross. The Rector of Cardross played an important part in the funeral arrangements of Robert I in 1329, and a tradition emerged as early as the 17th century that the viscera of the Robert I were buried in this church following his embalming. Robert I was of course Robert the Bruce. (Viscera refers to the organs in the cavities of the body, especially those in the abdominal cavity).

HES add : The monument is of national importance because of the potential of the upstanding structure to contribute to our understanding of medieval ecclesiastical architecture. Its below-ground remains have the potential through excavation to add significantly to our knowledge of the historical evolution of church building on the site, as well as contributing to our knowledge of medieval life through the skeletal remains likely to be buried here. Moreover, the site has the potential to feature in the national consciousness due to its historical function during the life and death of Robert I. [HES]. 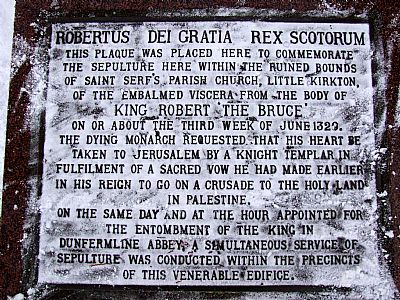 So if Robert the Bruce was buried here, why do other towns, ie Melrose and Dumfermline also claim this honour? That is a digression from our current subject, but links to clues can be found below. We may not have what many may consider his most vital of organs, but we do have the honour of having something of our historical hero, the warrior and king who retired to near Renton in the parish of Cardross right here.

Lairich Rig writing on Geograph.org finds reference to : In 1570, Lord Fleming, who was holding Dumbarton Castle on behalf of the supporters of Mary Queen of Scots, demolished much of this church, as well as several other buildings that belonged to supporters of James VI (who was still an infant; he had been formally crowned in 1567, but, in 1570, a regent was still ruling on his behalf). Fleming then had the stones carried off to the castle. This church has therefore been a ruin for many centuries. [Geograph.org].

In the seventeenth century, the boundaries of Cardross Parish were redrawn; afterwards, they no longer included the area that is now Levengrove Park. In 1643-4, a parish church was built in what is now the present-day village of Cardross; it was replaced by a second church on the same site in 1862-7 (NS3477 : Cardross Old Parish Church). After the latter church was damaged during the blitz, a former Free Church became the new parish church: NS3477 : Cardross Parish Church.

The nave of the ruins of St Serf's Church contain a number of 19th century burials marked by headstones. These include those of the Dixon family, prominent industrialists in the area. 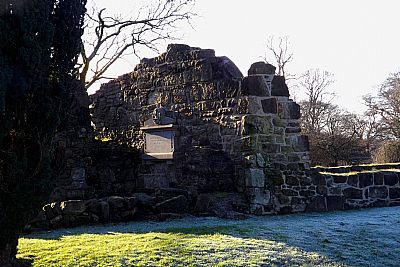 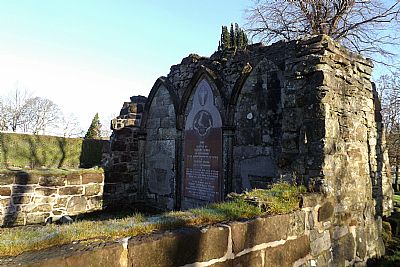 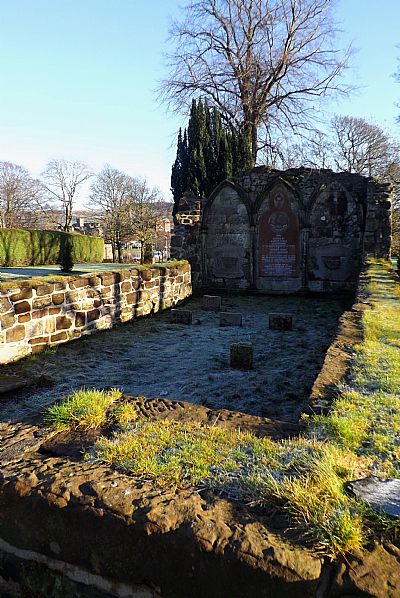 These are general views of the church ruins. You can see some of the internal tombstones. 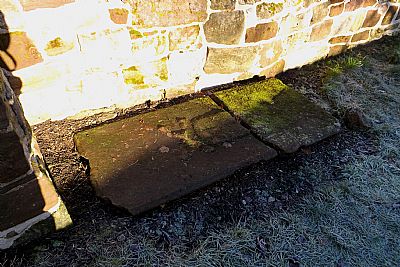 This is the oldest tombstone with a crest and crossed bones. 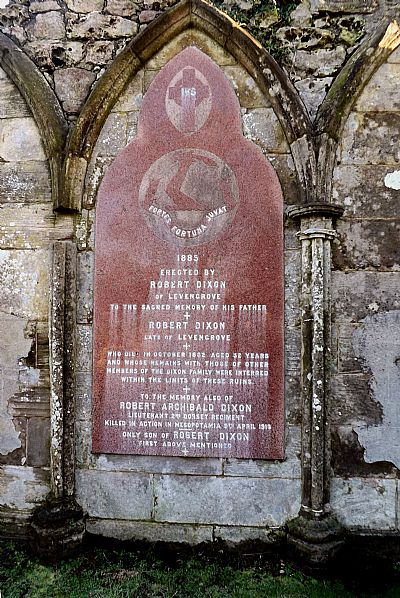 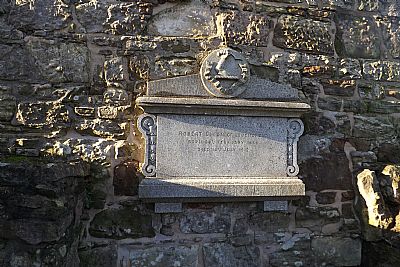 These are two of the Dixon memorial plaques.