ACCESS : This is an active church and hall open to all. Check service and event times.

St Stephen's Church is a Roman Catholic church, established in 1907. The original church was destroyed in the Clydebank Blitz. When war was declared in 1939, the Clydebank shipyards and all the urban area associated with it were identified by the Germans as an important target. On the first night of the Clydebank Blitz, the church suffered a direct hit and was completely distroyed as was most of the school. On that fateful evening the hall keeper, Stevie Quinn and Jimmy McIver were checking that the church was locked when they heard the planes overhead and took refuge in a surface shelter. Their lives were saved. The following day Quinn recovered the tabernacle from the debris and took it all the way to St Mary's Duntocher in a wheelbarrow. That wheelbarrow was to still be in use by the church for years to come.

The post war years were austere, but a new church was to be completed in 1950. This though was considered temporary and it became the hall.

The magnificent modern church of facing brick structure with its imposing towere was designed by the architect Thomas Cordiner and opened on 28 September 1958. The fresh modernity expresses a post-war optimism and faith that is still relevant today.

The ecclesiastic artwork that greets you here is modern and eyecatching. Around the walls are tapestries! St Stephen's Embroiderer's Guild was formed in 2004 under the guidance of Father Gerard Conroy. They took their inspiration from Netta Ewing and the Sacred Threads Group of St Leo's parish in Glasgow. The themes of the kneelers were based on Celtic animals and birds. Then with their skills honed they progressed to the wall panels incorporating religious themes. There are two sets: one known as the Glory Tapestries and the other the Redemption Tapestries. They are somewhat abstract, but this draws the viewer in to discover the meanings behind them.

The stained glass windows are impressive too. That of the Crucifixion includes a depiction of the church destroyed during the war.

Behind the altar is a very large wood relief carving of the Martyrdom of St Stephen. It is by J. McIntyre and depicts the martyrdom of St Stephen, serene and prayerful in the face of anger of his accusers. Saul, later St Paul, sits at the top looking on. Above on the canopy are palm fronds, symbol of the victory of martyrdom. 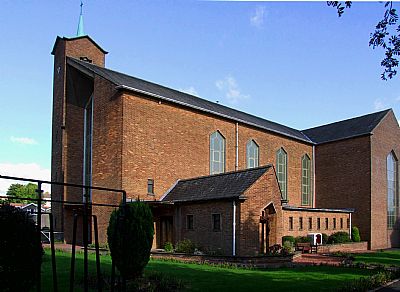 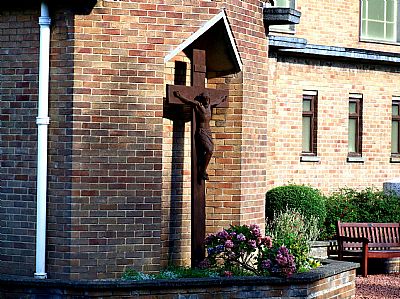