This website has been instigated in some ways by the Covid-19 pandemic. Many events needed to be put on hold. Online options such as virtual events became the norm While the personal implications for each of us are rather close, the broader social implcations, the way we live, will only become better understood in any broader perspective with the passing of time. Covid-19 hit hard worldwide and West Dunbartonshire has been just one of a great many communities that has suffered terribly. On the other hand, there are a great many who have done amazing work to mitigate the impact, some at heroic level.

This is not the place or time to try to give an objective assessment. That will be done by others when it is more appropriate. What we can note now is how we have come to depend to intensely on technology and science, whether that be medical or for aids to live with. Consider though what it was like during previous epidemic and pandemics - even wtihin living memory. And then consider how they were mitigated before such means were available.

Epidemics and pandemics are nothing new. We read of them throughout history. Consider though the following accounts specific to Dumbarton in the 17th century as re-quoted and written about in 1879 by Joseph Irving. Quite what this particular pestilence was is not clear. Neither are some of the abbreviations and indeed the use of language at the time. What is clear is the extreme measures that were taken.

The modern English is by Irving. The old English is from much older sources that he is quoting from.

WATCHING FOR THE PEST. - The Baillie ordanis ilk q2 maister set doun of befoir to causes of his quartr some sufficient personis to watche daylie betuix sun-rising and doun-setting vix.. tua at the brig and tua at the college, and to remaine fra iij hours in the morning qik ix hour at the evin; and giff ony persone failye ordainis ilk q2 maister to poynd the persone dissobeyan for vj4th viij4 (Contemporary writers make repeated references to the appearance of this pestilence. It seems to have begun to spread in May, and increased greatly during the heat of June and July).

THE PEST. - Former acts renewed for watching the gates against the pest and “that name presume to receave or ludge ony strainger cummand to this burgh qth first the baillies or sum of the counsall be foirsein therof and also that na person enter or cum wth this burgh but be the brig allanarlie and that all personis beyond Clyd land ther bottis at the Castle and cum on fut be the brig and na uthir wayes and bring with them sufficient testimonialls either be ther ordinar Minister or Maister being unsspectit of any pest or contagious seikness undir paine of scurgeing and baneisment forth of the toun for the first falt vndir the paine of deid for the second falt. [Chancellor Dumferline, writing to the King regarding the spread of the pest at this time, states that the calamity “hinders all meitings off counsall, and all publict functions for ministration of justice, and maintenance of good reualls and government except ilk as we tak at starts, with some few at Edinburghe or in ilk other place for a day to keep some countenance of ardour and cair off your Majestie's peace and obedience”, The imprisoned ministers at Blackness also addressed a petition to the King, in which they described the state of the country under the affliction.

As at early 2022, we are a little more optimistic about the decline in severity, it not the end, of the Covid-19 pandemic. The Omicron variant appears to be less severe even if it is more contagious. And most of us have now been jabbed ("jagged" to many Scots). We now have to simply live with it. The virus itself is invisable to the naked eye although the "corona" of the coronavirus refers to the appearance of a crown when seen with sophisticated instruments. What we do see though are the visible reminders all around. There are still THANK YOU NHS" signs in many windows, complete with rainbows. The following three photos were all taken in central Dumbarton.

By April 2022 most of the UK had already stopped wearing masks and Scotland also began to look and feel "normal". The Omicron variant was more contagious, but less dangerous. In fact for many people it differed little than to the common cold. Elsewhere in the world the pandemic still had a strong and terrible hold. 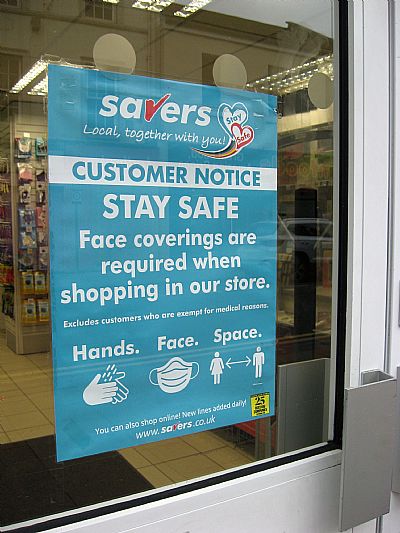 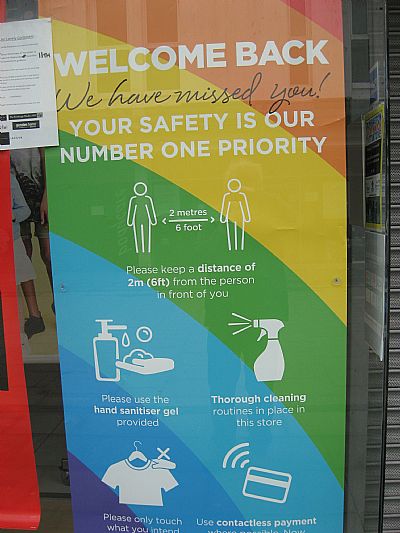 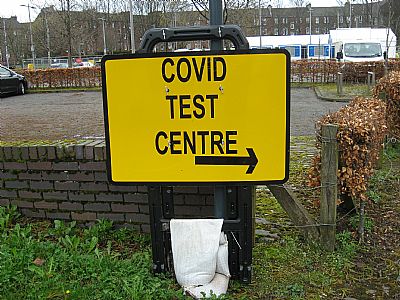 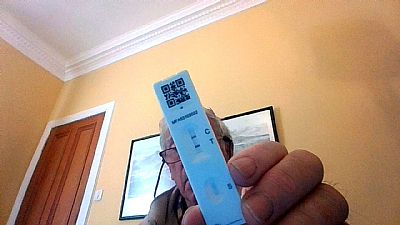 The dreaded second stripe on the lateral flow test.