ACCESS : From the old (now palisaded, but breached) gateway on Carman Road, follow the old driveway until you reach the building. Note that it is completely enclosed by security palisading. it is inadvisable to enter as it is unsafe.

In terms of modern local authority areas, this is outwith West Dunbartonshire, but in times past it was within the county of Dunbartonshire and, as it is but a walk over Carman Muir, is therefore included here.

Nestled amongst wild woods that hint just a little of once being tamed, is a most amazing ruin. Well actually there are three : St Peter's Seminary, the scant remains of a Victorian House and of Kilmahew Castle (Covered separately). But it is the Seminary that we are concentrating on here.

St Peter's Seminary has been called Scotland's greatest modernist ruin. These decaying modern buildings do have a certain raw aesthetic, but they are also sad. Unlike buildings from our historic past such as castles into which ruin we read the excitement of past grandeur or turbulence from which we have now escaped, modern ruins speak almost only of neglect and decay. St Peter's Seminary though, is a complex combination of concrete forms richly embellished with graffiti. From this you may expect to see just another derelict modern building, but it is different. It almost enjoys being a ruin; defiant in its abandonment; devoid of fittings and finishes and much of its roof, yet still asserting its place amongst the trees.

Some of these photos were taken by clambering through it in such conditions. Unidentifiable squawks and drips and clattering. Ghosts? No, most probably birds and the weather, although signs of unsuitable recent habitation were found. To this was disturbance by local kids with their spray cans contributing to the already generous contemporary adornment all monks would be very unsettled by. Not all  pictures of the graffiti can be shown here!!. Many would be most unsuitable for you as a discerning audience. Even that here is borderline. There is an ongoing debate about the validity of graffiti as art; an expression of society in a given time frame. What do you think?

The seminary was designed as a training centre for student priests by Glasgow architects, Isi Metzstein and Andy MacMillan from the practice of Gillespie, Kidd and Coia. It was soon recognised as a modern building of world significance and was to be one of the few modern buildings in Scotland to be listed “A”. Although commissioned earlier, the plans were only finalised in 1961 and the building was completed in 1966. The practice was fast becoming recognised for their innovative modern architecture. This one certainly has been influenced by le Corbusier. But changes were not only happening in architecture. The expected number of recruited student priests was not realised and the premises were only used for a few years. They were closed in 1980 when the Archdiocese of Glasgow moved the college to Newlands in southern Glasgow.

Although standing forlorn for many years, it was not forgotten. It was the focus of many initiatives and student projects to adapt it to new uses. The structure is challenging to change, economically and structurally. But a new lease of life did emerge in 2016. Funding was secured and under NVA, a public art consultancy, and other consultants, it emerged as the venue for Hinterland.

Hinterland marked the official launch of Scotland’s Festival of Architecture 2016 and was a key highlight in the Year of Innovation, Architecture & Design. Over ten nights from 18 – 27 March 2016, sell-out audiences explored one of Scotland’s most important modernist buildings for the first time in thirty years.  This immense public artwork introduced the long terms plans for the site and celebrated the journey of transition of this architectural icon. [NVA].

Even if the building does not find a new alternative permanently sustainable alter ego, it appears that its ghosts are able to turn their back on the past and look to the future, at least seasonally. Even if you don't exactly find religion, you may search for its mysticism in the filtered light amidst the shadows of hard concrete forms and enclosing space. If not exactly sacred art, one may recognise the inherent urge to explore and convey imagery and messages by the graffiti artists. Then take a step further in. The intervention of objects and figures and procession whether opportunist or creative remind us subtly of its original intent.

In recent years the premises have been further "secured" with palisading. You can go right up to it and around it with little impediment other than the awkwardness of the path to one side. You do not need to go within the fencing to appreciate it. Stay outside.

in 2020 it was taken over by the Kilmahew Education Trust, KET. They have other visions for it. An off road bicylce obstacle course has been established within the trees in one of the small gorges. 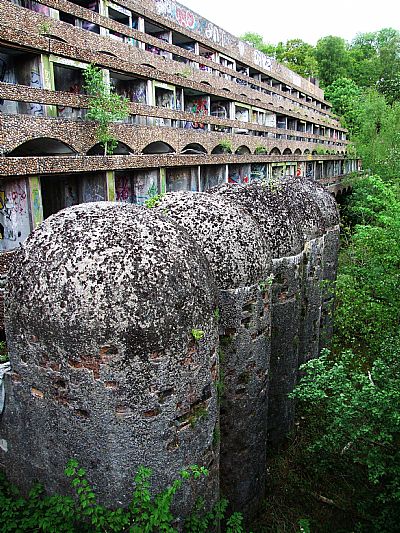 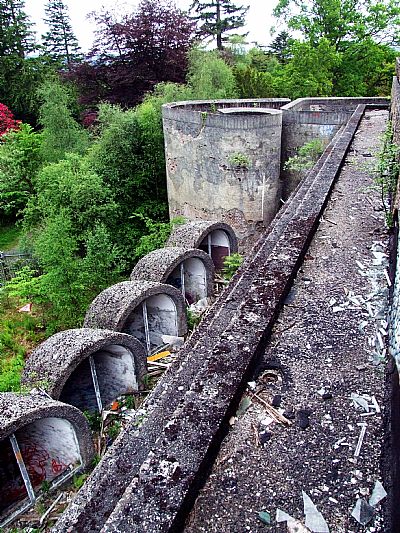 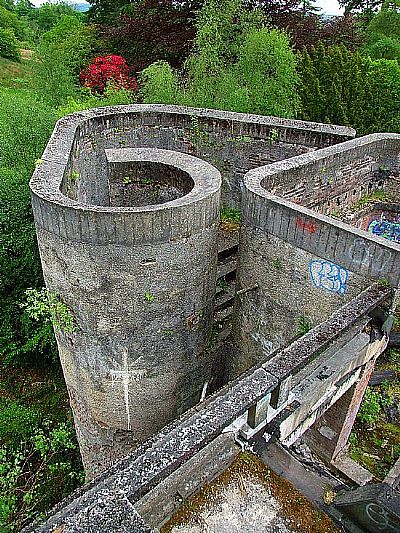 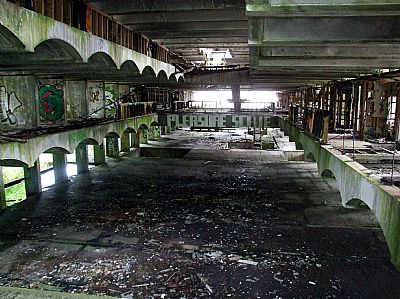 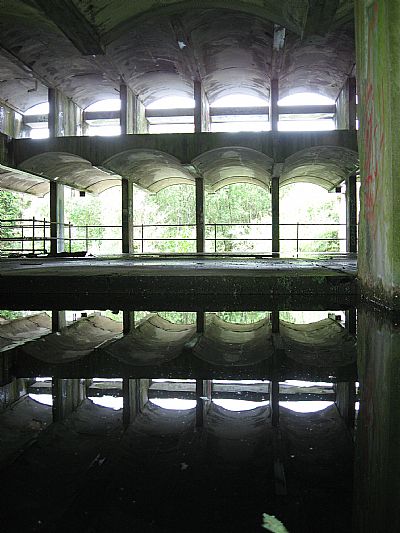 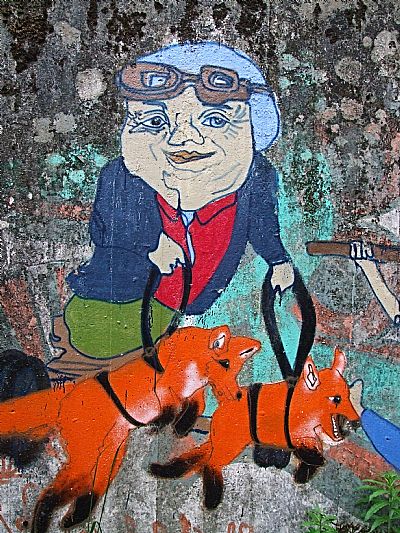