Listed A together with the church.

Immediately behind Riverside Parish Church is a small churchyard. It had been much larger, but stabilisation of the River Leven banks and then encroaching industrialisation reduced it to within the current west boundary wall. Infill for stabilisation included town rubbish. The church protested, but was voted down. Instead when the current church was built the graveyard wall was repositioned further over than its predecessor. The gravestones against it have been affected by the altered ground level. Most are partially obscurred and some are eroded, but modern nameplates have been added to assist us. 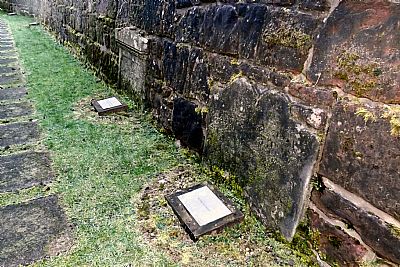 Gravestones along the back boundary wall.

Interesting gravestones include that of Rev James Oliphant, satirised by Robert Burns. Approporiately being so close to the Leven shipyards, there is a burial vault of Robert Napier known as “The father of Clyde shipbuilding”.  Although referred to as a vault, what you see is an unroofed enclosure. There are several family members recorded here. 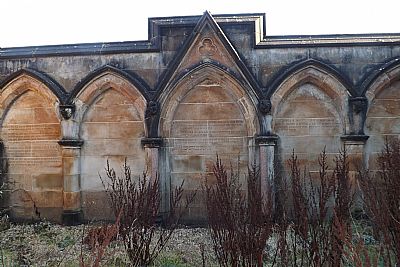 There is a crusader grace slab, in this case a simple grave cover. With Dumbarton Castle being so close it is not surprising to see garrison rows for seating officers and soldiers. Here too lies Major General Ilay Ferrier, who was governor of Dunbarton Castle, Scotland, where he died in 1824. His headstone is fairly new, being a replacement of one which had deteriorated and commissioned by his descendents.

Look for : the shoe maker.