ACCESS : This site is partially accessible, but little is recognisable. It is suggested that you go to the Clydebank Leisure Centre which is reached down Cart Street off Glasgow Road. That is the same route as for the West Dunbartonshire Council offices and the West College Scotland's Clydebank campus. From there you can walk down the quayside in the direction of the Titan Crane.

This world famous shipyard had developed from its predecessor of that of brothers, J & G Thomson, in 1871, after they moved their operations from the site of the Graving Docks in Govan. That company had built over 20 liners for Cunard as well for other shipping lines. Among the other vessels they constructed were the paddle steamers which sailed up to the Western Isles and the Highlands.

The First World War saw the yard greatly expanded. Peace saw a dramatic drop in orders. That was to be resuscitated by the Second World War.

At its height, from 1900 to the 1950s, it was one of the most highly regarded, and internationally famous shipbuilding companies in the world. It built many notable and world-famous ships including the RMS Lusitania, RMS Aquitania, HMS Hood, HMS Repulse, RMS Queen Mary, RMS Queen Elizabeth and the Queen Elizabeth 2, the QE2.

By the 1960s though local shipyards began to find it increasingly difficult to remain viable in competition with the emerging shipyards in Eastern Europe and the far East. In 1968 John Brown's merged with other Clydeside shipyards to form the Upper Clyde Shipbuilder consortium in an effort to pool resources. That collapsed in 1971.

Politics was not far away during this period of commercial uncertainty or was at least perceived to play a larger role than purely commercial considerations. An enormous number of jobs were at risk. It was about this time that stalwart Socialist, Jimmy Reid, planned industrial action.

The company ceased shipbuilding although its engineering section remained successful in the manufacture of industrial gas turbines. In 1986 it became a wholly owned subsidiary of Trafalgar House, which in 1996 was taken over by Kvaerner. The latter closed the Clydebank engineering works in 2000.

The significance of this shipyard had a really tremendous impact on local community identity.

The QE2 had its last voyage in 2008 before becoming a floating hotel in Dubai. 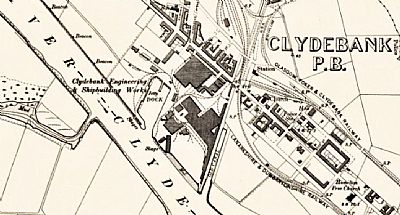 This OS map of 1896 shows the Clydebank Engineering and Shipbuilding Works. Note the Forth and Cart Canal which intended to link the Cart River with the Forth and Clyde Canal. (Discussed separately). 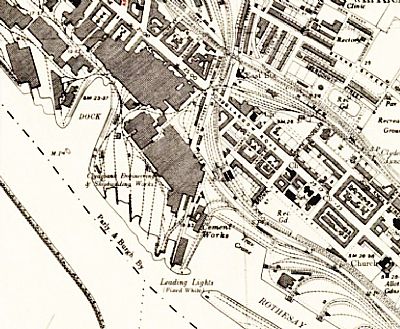 By 1938 the yard is much more developed. The Rothesay Docks next to it are described separately.

The following extract of an aerial photograph is reproduced with the permission of the National Collection of Aerial Photography, NCAP. See at end for details. 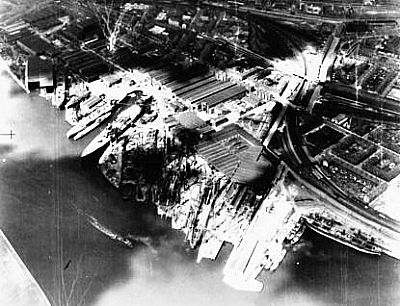 This aerial view dates from 1939. It is much the same as the map above. 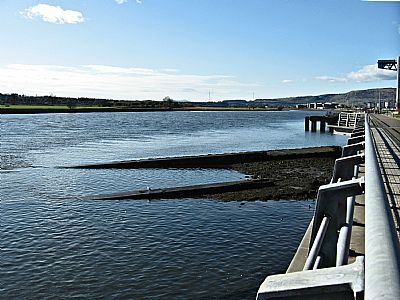 The area once occupied by John Brown's is now that of the Clydebank Leisure Centre, West Dunbartonshire Council offices and West Scotland College Clydebank Campus. There is a riverside promenade. Look over the railing and you see some of the slipways from the John Brown's days. 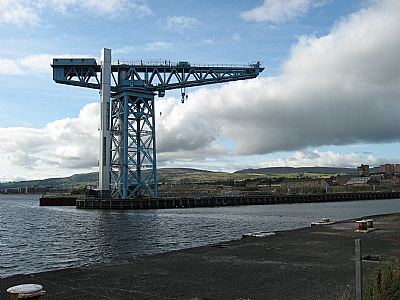 The Titan Crane and this basin are remnants of John Brown's Shipyard. 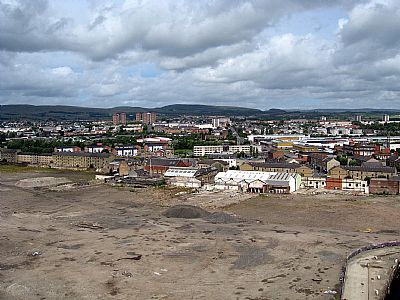 This view from the Titan Crane was take well before development of the land had got underway, but it is useful in udnerstanding the extent of the shipyard that occupied it. You may be able to make out the Town Hall tower and clock. 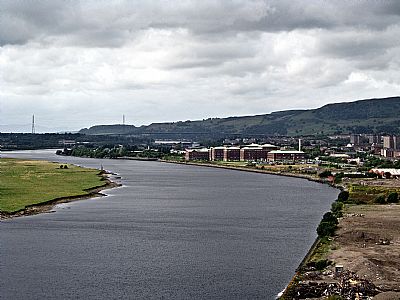 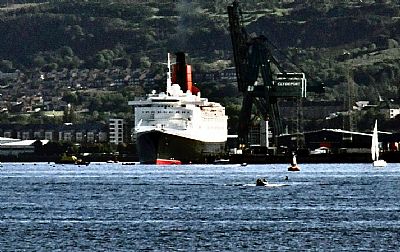 The QE2 that was built at John Brown's Shipyard served for many voyages around the world until she was retired. She was turned into a floating hotel in Dubai, but not before a last sentimental visit to the Firth of Clyde in 2008

NATIONAL COLLECTION OF AERIAL PHOTOGRAPHY : Reproduced with the permission of the National Collection of Aerial Photography. The archive record is "Dalmuir; Old Kilpatrick; DUNBARTONSHIRE; SCOTLAND".

NATIONAL LIBRARY OF SCOTLAND : Reproduced with the permission of the National Library of Scotland.