ACCESS : This is within farmland with livestock. Access is via cattle routes which can be very muddy and difficult.

It is often surmised that our ancient ancestors had little appreciation of the aesthetics of scenery. Perhaps so, but they certainly appreciated scenery in terms of strategic and defensive outlook and the sense of place inhabited by the spirits of those that preceded them. This vantage point has great views over the Firth of Clyde. Not only that but it is overlooked by the hillfort on Carman Hill not far away and within a landscape that also had habitation that we now recognise from several hut rings. Even if the community was dispersed most of the time, it still anchored itself spiritually in this environment.

Elsewhere we wonder of the quarry below Carman Hill was a chambered cairn. It appeared on OS maps as "Faerie Knowe" and that raises considerations of where this community buried their dead, at least those with social standing.

This site on Walton Farm though is definately a burial cairn.

The large stones have been scattered by excavation and pilfering, but the largest, the portal stone, remains standing. A second has collapsed. These bring to mind entry points. Portal stones. Even though they would not have been actually serving as usable doorways, they seem to indicate the way in or out of the spirits of the dead. It has been suggested that the orientation with the setting sun is significant, but insufficient remains to confirm this.

Canmore tells us about trial excavations. Two portal stones, and two possible side slabs appeared to indicate a burial chamber of some 15ft in length. A deposit, apparently ritual, of at least 50 quartz pebbles was found, and the discovery of the butt of a broken axehead of polished stone, dates the site as Neolithic. [Canmore].

We don’t know how this Walton Farm was named - whether after a person or another place, but in a local context it is tantalising as a hint of “indigenous” people referring to “outsiders”. Wiki tells us the first element in these names was variously Old English walh ‘foreigner’, ‘Briton’, genitive plural wala (see Wallace), w(e)ald ‘forest’, w(e)all ‘wall’, or wæll(a) ‘spring’, ‘stream’. the suffix tun ('town, farm, hamlet') and one of the prefixes wald ('a wood'), walesc ('foreigner') or walh ('farm worker'). [Wiki]. In other words the place or "ton" of the incomer / foreigner or "wal". 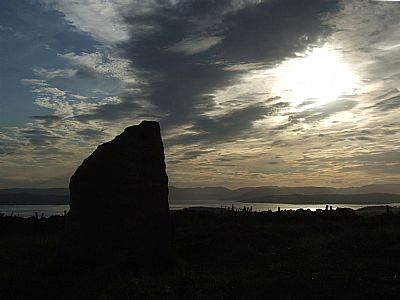 A dramatic silhouette of the portal stone against clouds with a setting sun. The Firth of Clyde shimmers in the background. 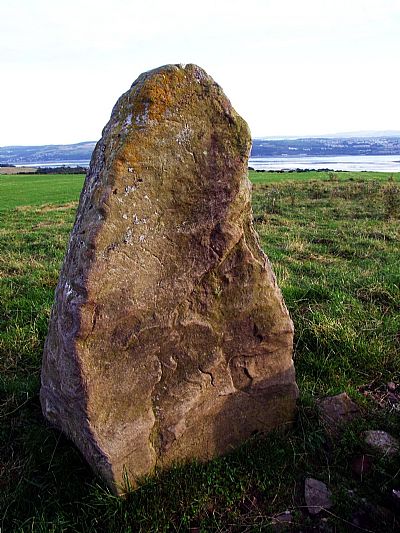 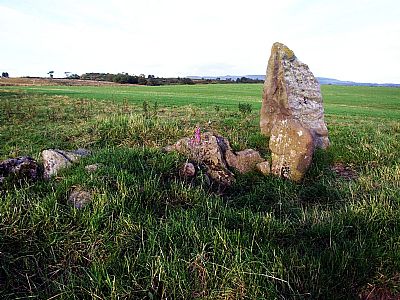 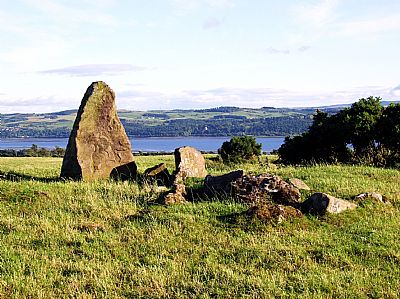 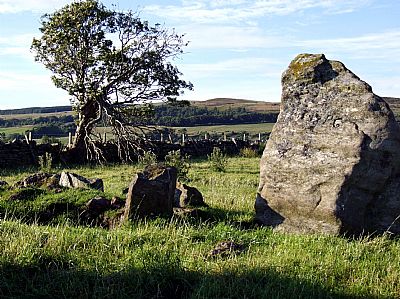 In this view you casn make out early vandalism in the form of etched intitials on the portal stone. 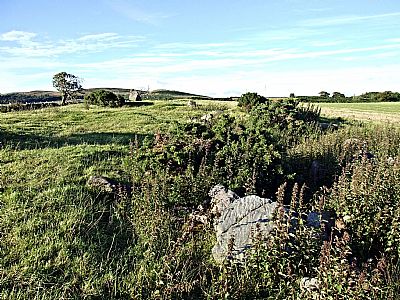 Stones have been widely distributed by tree removal, ploughing and intentional excavation in the past to search for burial items. That is the remaining erect portal stone in the background. 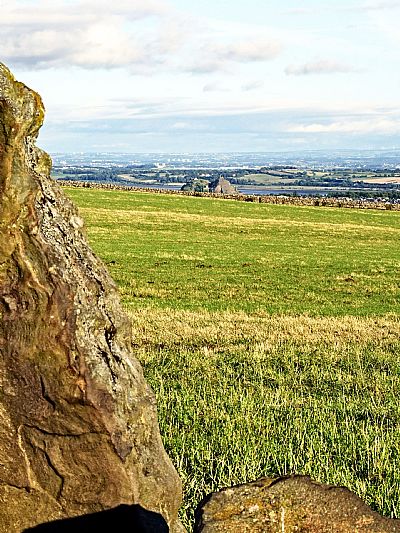 This view shows Dumbarton Rock in the distance.