ACCESS  : This site is now enclosed by a high fence as it has been planted with tree saplings.

You will be aware of working lime deposits, that lime can be used for fertiliser, for paint, render and mortar. You will also be aware that lime is a sedimentary carbonate rock and that it originates from marine organisms from what had been seabed. The definition geologically is rather complex, but in simple terms “Cornstone” is a name given to coloured limestone and by contrast is of terrestrial deposit.

There is such a deposit on Carman Muir and it has been worked in the past. There is a slight ridge which looks like it may have been used as a track to get the material out by wagon. This is at an extent that suggests a small industrial establishment - what could be considered a cottage industry. Excavation was probably done by hand with chisels and crow bars. Cornstone can be harder than the more familiar white limestone, but nevertheless reasonably easily broken up by hand. When excavated it looks much like most rocks. Unlike white limestone in which fossilised sea creatures are often recognisable, only small vague shapes can be seen.

There is no obvious remains of a kiln, although some rock arrangements suggest where they could have been. Lime kilns need to be raised for ventilation and can look like anything from large pizza ovens to brick kilns. It is possible that there was at least one here built up of stone masonry, but this material of larger rocks was probably removed to build the nearby dyke. Once prepared by heating, lime is difficult to store as it needs to be kept dry. Water, even rain, will slake it and this creates much heat, turning it to quicklime. This is a process applied under controlled conditions when utilised, but not until then.

In one of the photographs there is a pit that may have served for storage. It is a natural bedrock arrangement ie not of built walls, but it has clearly been excavated at great effort Perhaps it had a superstructure above it that has since disappeared. While rectangular kilns did exist elsewhere, there is no evidence for this here. The pit itself would have been able to withstand the heat of slaking and may have been a tank for this purpose, but there are no signs of lime itself.

Judging from the amount of material lying around, business suddenly stopped. It was probably simply not commercially viable.

The outcrop and ridge has little to offer in terms of arable land, but much of the surrounding area has the striations of ditches for drainage and planting. More modern ditches dug by mechanical diggers also mark the landscape, but are deeper and more strategically distributed. The older ones though are almost as if a giant comb had been pulled across the muir.

One of the undisturbed but exposed bedrocks has patterns on it that mimic those ditches. Are these marks natural or man-made? - perhaps as a way of setting out the arable land and its ownership. A sort of map. We may have hardly glanced at these marks if it weren't for another enigmatic carving on the same rock. This is of what looks a bit like a small human figure. It is quite possible that this was created by a mason. Masons would sometimes identify their work on buildings with such symbols and it is not farfetched to imagine a mason either working or visiting this source of lime.

There is more speculation on the subect in the LOCAL MYSTERIES article at the end of this website. (See ARTICLES). 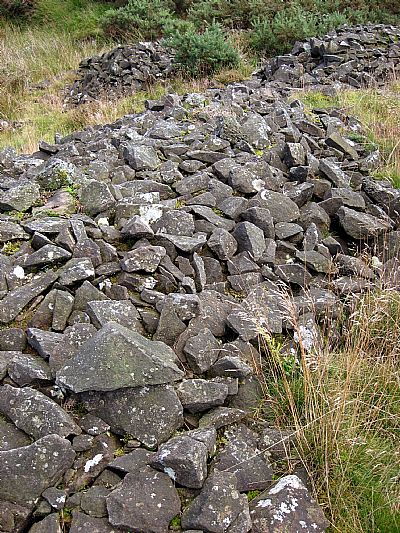 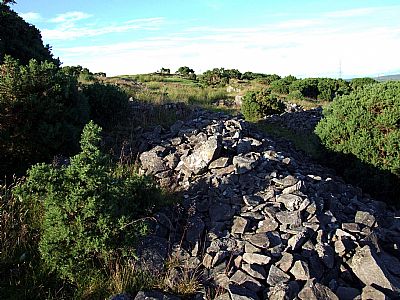 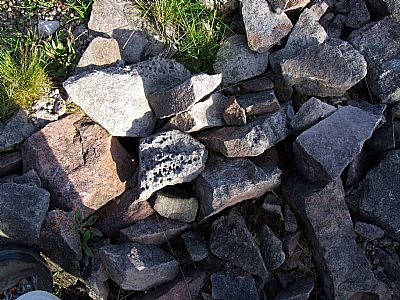 Some views of the excavated stone lying in long piles next to or in pits. 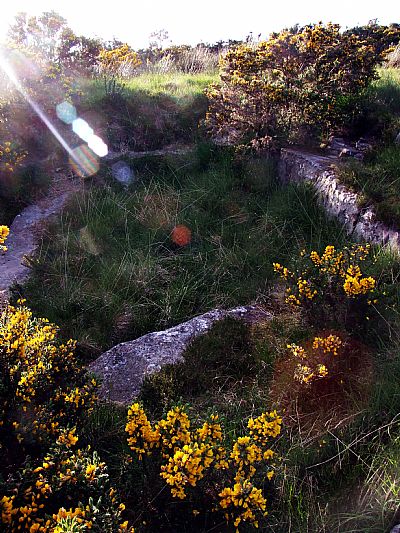 This rectangular pit within the bedrock may have been used to store the extracted lime. 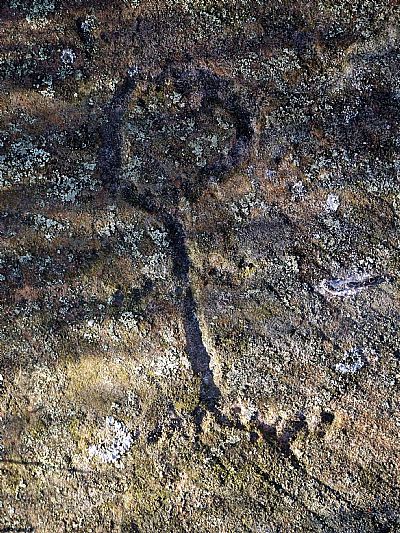 This stylised "man" with a head, arms and legs has been carved into bedrock. Is it a mason's mark? And are thos striations a map of the drainage and planting ditches that cover much of the surrounding muirland? 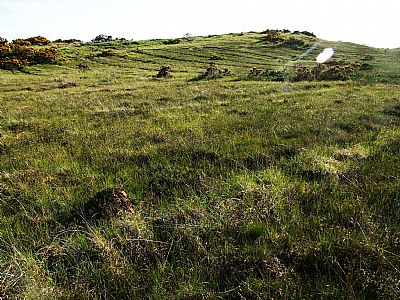 These ditches cover much of the surrounding muirland.