As you turn off the A82 for Bolwing at the Dunglass roundabout or pass along the cycle track, you will notice some severe looking security gates and a gatehouse. These are here for a good reason - this is a fuel depot. Unfortunately this completely restricts access to this striking combination of rocky promontary, Dunglass Castle and Henry Bell monument.

But there are ways to see it from a distance. It is partially visible through the trees, but an even better view is from the other side of the Clyde at low tide. To do the latter, go over the Erskine Bridge and turn immediately left down to the old ferry point and Boden Boo carpark. From there walk westwards under the Erskine Bridge until you are opposite the monument and castle. Quite a diversion and only practical at very low tide (take care), but you can actually get reasonably close to it.

What a way to see a local castle. So why is it of significance?

While it appears fortified, a castle, it is in fact a combination of old and modern.

The listing text tells us : The old castle dates back to 1380, when it was the important strategic stronghold of the barony of Colquhoun. In the early 18th century it fell into neglect and was partly dismantled for the restoration of the Bowling quay. This was halted by Andrew Buchanan of Auchentorlie, who bought the property in 1812... The north west turret has chequered corbelling and bears the Colquhoun arms along with other devices, whilst the round south east turret is probably 17th century in date and may have been a pigeon roost.

The castle took on new historical significance when graphic artist Talwin Morris occupied it. He was a prolific book designer and decorative artist working in the late 19th and early 20th centuries, particularly known for his Glasgow Style furniture, metalwork and book designs. He became the graphic designer for Glasgow publishers Blackie and Son. With Morris being a leading artist within the Glasgow circles at the time, he was naturally close to others including "The Glasgow Four". These included the painter and glass artist Margaret MacDonald, acclaimed architect Charles Rennie Mackintosh (MacDonald's husband), MacDonald's sister Frances and Herbert MacNair. It was through this close network that Mackintosh got the commission from Blackie for Hillhouse in Helensburgh. Morris had asked Mackintosh to design the castle interiors.

The castle has been abandoned for many years and has become derelict. Fortunately some years ago work was done on the roof in an attempt to preserve the building, although it still remains on the Buildings at Risk Register for Scotland.  Some fittings had been removed years before. The castle's bookcase is now in the collection of the Royal Museum, Edinburgh. The premises have been out of bounds to the public for many years, but there is a story of local history enthusiasts being able visit it about 20 years ago. They found the place a sad shambles. One of them ran his hand across a shelf and found some loose panels. They appeared to have artwork on them by Talwin Morris and were handed to Glasgow Museums for their attention. 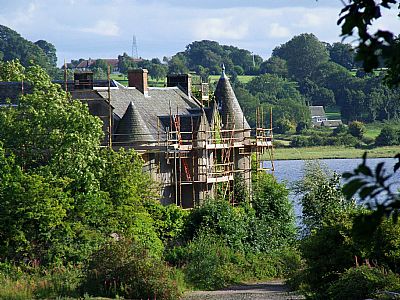 A rare glimpse through the trees while roof repairs were under way. 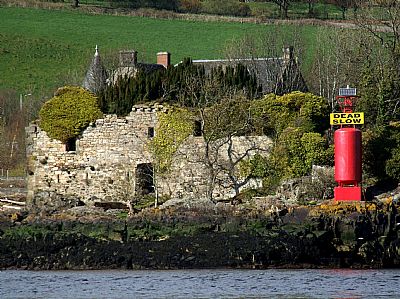 From across the Clyde you can see more of the earlier defensive wall with the later building behind it. 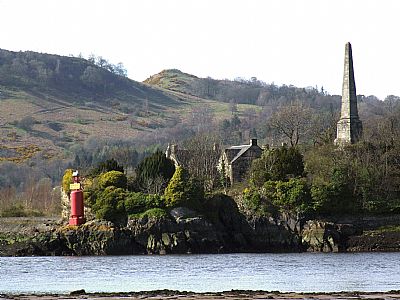 This view from across the Clyde shows the later building behind the earlier stonework and the Bell Memorial obelisk alongside.