The date of the well's origin is unknown, however it is thought to date back to medieval times.  Shiers Well is traditionally associated with the same saint were located at Alva and Monzievaird.  The well has been recorded under various names including: St Shear's Well, St Shier's Well and St Serf's Well.

It is thought that both Shiers Well and the 1714 well, approximately 60m to the north of this location, are both supplied by the same natural aquifer.  The wells were utilised as part of the water connection beneath the River Leven in 1714.  This was part of the first municipal water supply in Scotland and you can find out more by visit the 1714 Well.

An archaeological surveyor's note in the Canmore entry for St Serf's Church identified the well being used as a drinking fountain within the park.  The original cast-iron pump in front of the well house was provided by George Smith and Sons of the Sun Foundry in Glasgow. 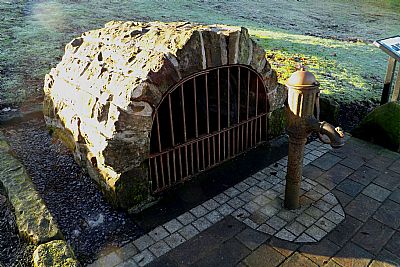