ACCESS : Easy access to it although not easy to get inside for more than a fw metres.

Havoc Hole at Havoc, below what was Notre Dame, is rather shallow. More a crevas. It has at times also been called Wallace's Cave and Dumbarton Cave. It is part of a lengthy edge to the hillside eroded by eras of flooding of the River Clyde and possibly ice. Confusingly some erroneously call this Bruce's Cave. Robert the Bruce is also remembered in the names of the local areas although this appears to have been simply one of association because of him supposedly having lived nearby. The very association of Wallace or Bruce needs to be taken with caution.

A cave, very possibly this one, is mentioned in Blind Harry's poem about Wallace written over a cetury and a half later. "Before dawn, Wallace departed from the town. On to the cave/cove of Dumbarton they went, and spent all that day out of danger. The innkeeper had food and drink brought to them. When night had fallen, they went resolutely to Rosneath With all the haste they could muster." [Translation per Lairich Rig - Geograph.org].  Other words by Blind Harry were picked up by local author I.M.M.MacPhail "in at the flows of Havock, and out at the yetts of Carman". So here we have two associations, one of the hsitorical figure of Wallace, and the other alluding to a secret tunnel.

Both of these appear to be rather fanciful, local lore rather than historic fact, but have teased and taunted those trying to decipher the words and what actually happened here for many many years. The subject is investigate further in the article Local Mysteries, a link to which you can find at the end of this website. There are even witches involved.

It is really more interesting geologically. This crevas is part of a lengthy sandstone cliff that stretches from near the River Leven along the north coast of the River Clyde to nearly Cardross. The cliffs date from the Upper Red Sandstone of the Devonian Period, approximately 375 – 360 million years ago, and would have been deposited at a time when the area we know as the British Isles was part of a large continent. For more detail see the link below. [Geologyglasgow].

Unbelievably, there have recently been plans to excavate the cliff face including the cave for a SuDS facility (excessive rain water attenuation) for a housing development on the land above. (2021). Amongst the objectors has been the Lennox Heritage Society. A 10 page document was submitted along with the objection and this can be found under ARTICLES towards the end of this website. index.asp?pageid=715697

The application was eventually granted in April 2022 : conditions including a specific Tree Preservation Order (TPO) being placed on those trees of most concern along the cliff edge and above the cave. It was soon alledged that some of those trees were being felled and removed almost immediately after planning permission was granted and further protests ensued. 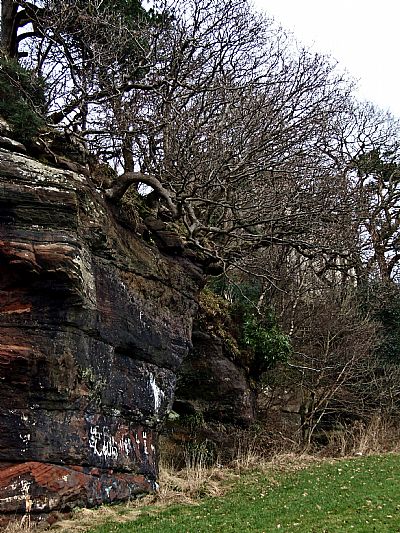 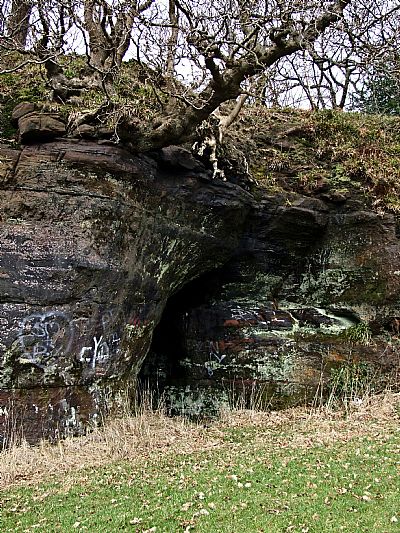 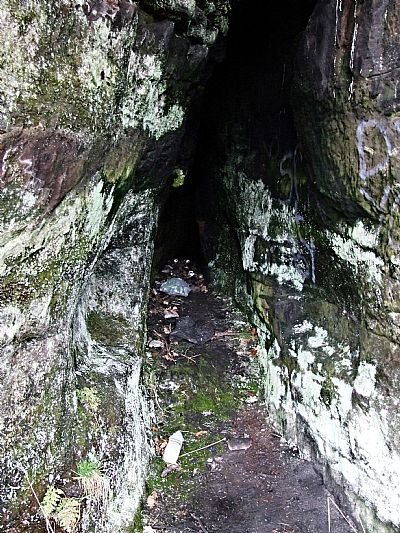 What lies under this accumulation of debris? Is the depth of the cleft sufficient to lead to further space? 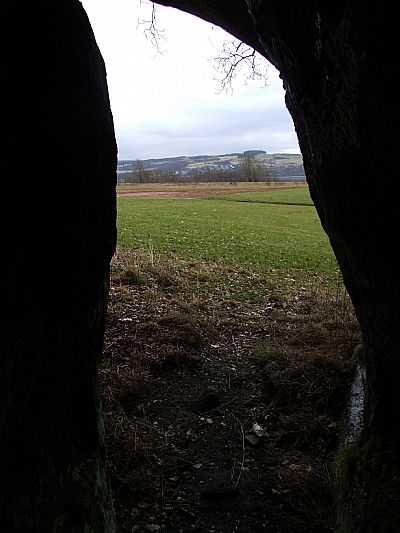 A view from inside. Rather limited. 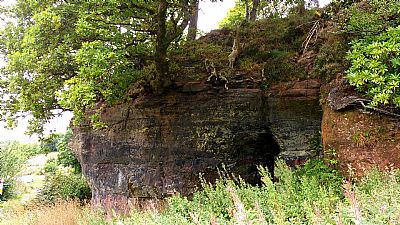 Management of the raised beach area commonly known as Havoc Meadow entails absolute minimum clearance of vegetation to ensure a rich and varied habitat for an extraordinary range of plants and creatures. 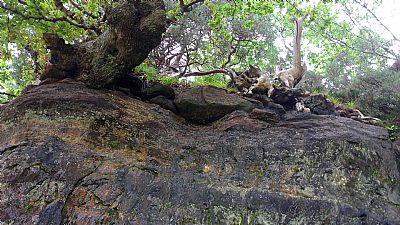 The vegetation on the cliff itself includes some extraordinary mature trees, some of which cling to the very edge. 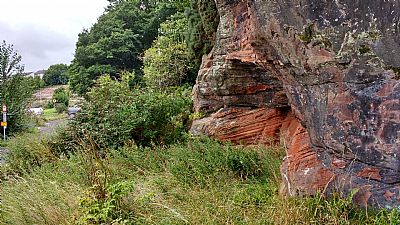 This view illustrates the accumulation of deposited material that was to become red sandstone during the Devonian Period, approximately 375 – 360 million years ago. And you can recognise the way that in turn was eroded back to the cliffs we see today with a raised beach between them and the Clyde. 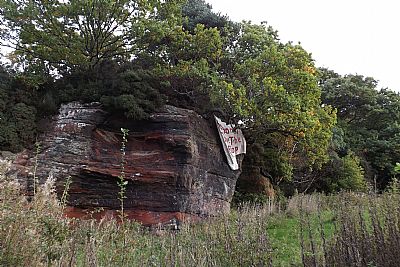 A large banner hangs from the cliff and trees in protest against damage to them as part of proposals for housing above in 2021. 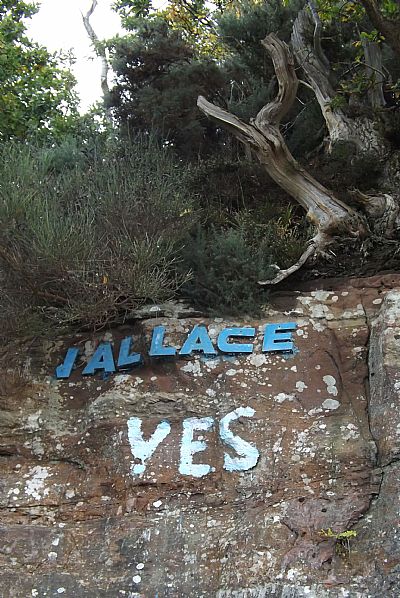 Irrespective of the proven historical provenance of the cave and cliff, the community associations are extremely important. Graffiti may not be the best expression, but it can be pertinent. Here large script infers both William Wallace standing up against real historic English interference and YES to Scottish independence in the modern era. 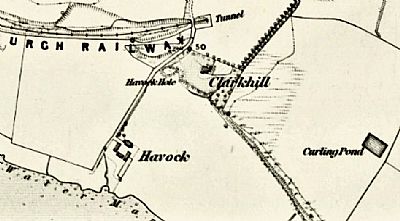 This OS map is dated 1860. The low cliffs are some distance from the actual shore which has what appears to be a farm steading also called Havock.