ACCESS : Reached by boat. A boat can be arranged through the restaurant. (see below). There is a secure carpark off the Arden roundabout at the junction with the A82 and the road to Helensburgh. There are walks on the island.

This is both the largest island on Loch Lmomond and the largest inland island in Britain. It is very conspicuous from much of the southern end of the loch such as from Lomond Shores and Duck Bay.

Inchmurrin derives its name from the chapel to St Mirren that was once on the island. Saint Mirin or Mirren, was a Catholic monk and missionary from Ireland Ireland (c. 565 – c. 620). He was the patron saint of the town and Roman Catholic diocese of Paisley, where he was the founder of a religious community which grew to become Paisley Abbey. He was a contemporary of the better known Saint Columba of Iona. Although he never came here, there were links between the Abbey of Paisley and the island. In the 7th-century a monastery with a chapel was built here and dedicated to Saint Mirin, hence the name of the island. "Inch" in Scottish and Irish placenames usually means an island.

The island has had many notable visitors throughout its history including Mary Queen of Scots and Robert the Bruce. It was also once the retreat of the Earl of Lennox and his family.

The island has a bar and restaurant and self catering accommodation.

There are some nice walks and even a beach where you can swim depending on the weather.

Besides the site of the chapel, there are the  the ruins Lennox Castle.

To reach Inchmurrin you need to travel by boat. There is a ferry service which can be arranged by contacting the restaurant. It leaves the Burnfoot Jetty at Arden.  At the Arden roundabout off the A82 at the junction with the road to Helensburgh, turn towards the Loch and proceed down to the demarcated secure parking area. The restaurant phone number is clearly displayed on their website and at the carpark. The ferry price is added to the restaurant bill.

When you are waiting at the ferry jetty and looking across at Inchmurrin, you will also see how it forms part of the Highland Boundary Fault Line. In the distance is Conic Hill where the line rises out of the Loch. Inbetween are the smaller islands of Creinch, Torrinch and Inchcailloch.

A great part of the attaraction is taking the ferry across. Great views in all directions. Sometimes a rainbow. Always other islands beyond and Ben Lomond in the distance.

Rainbows naturally mean rain, but that may be short lived on your visit. 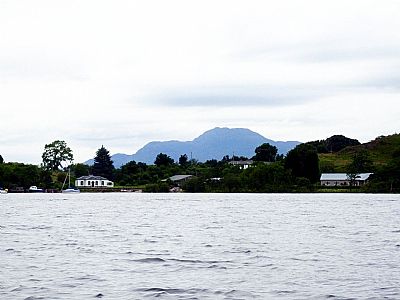 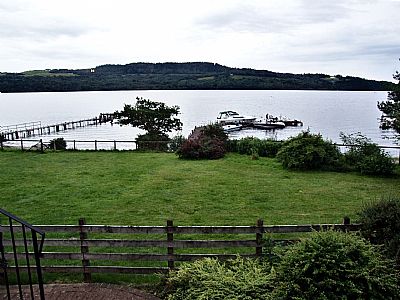 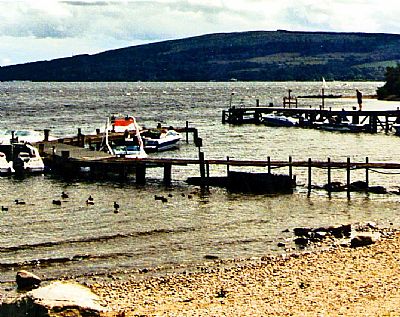