ACCESS : The site is within a park and readily accessible. Off-road motor bikes may startle you. What you can see of the stones is limited.

///announce.bombshell.expressed Auchnacraig Road entrance to the park on south side. Walk through the carpark and turn right. Cross the road and you are now in the park.

///repaying.lunging.stem Location of visible stone. A second stone is close by under the trees.

The Cochno Stones are very mysterious. They are a fine concentration of cup and ring marks across flat rock. This type of marking is widespread across Scotland, but this here is exceptional. No one today really knows what they represent. Are they celestial maps? Or simply symbols of demarcation of land ownership? Or are they ritual sites with perhaps sacred liquid in the "cups" and the concentric circles signifying people or past ancestors or spirits?

The main and most impressive stone is unfortunately hidden from view, buried for its safety. A lesser nearby one is readily viewed, although is very disappointing. Only two hollows are evident. Have a look a little to your left almost under some trees. There is another one with more pronouced "cups". As for the rings, you just have to have faith that there are some somewhere. 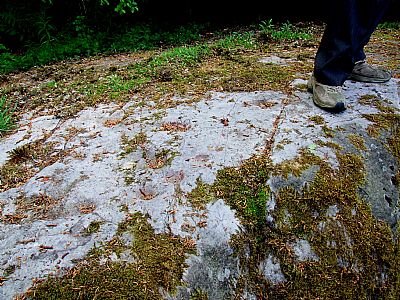 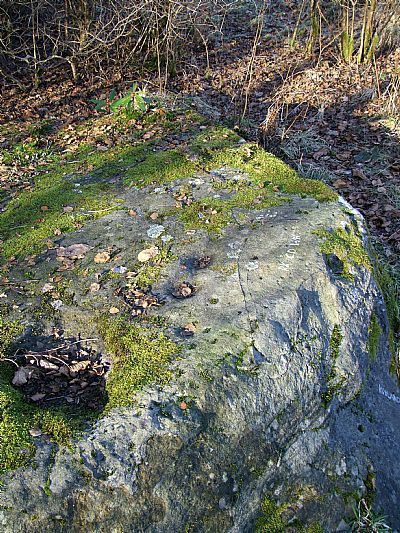 This stone is exposed and visible. Unfortunately vandalism, wear from visitors standing on it and moss allow little of the cup and ring features to be seen. 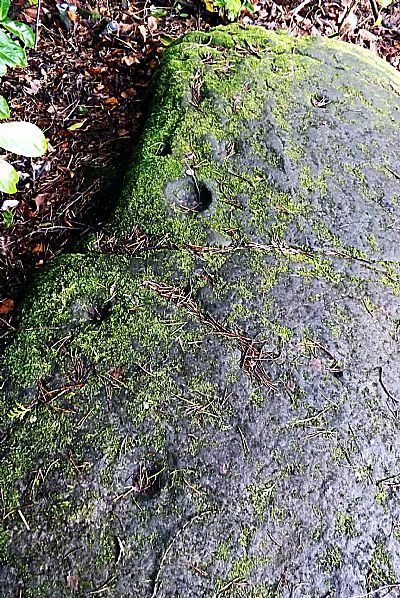 This is the stone that is tucked in under some trees. The "cup" marks are easy to see.

Discovered in 1887 by the Rev. James Harvey, the ancient stone measures 13 meters by 7.9, and features around 90 intricate carvings—considered as one of the finest sets of petroglyphs in Scotland—which according to many researchers represent a cosmic map, detailing planets and stars.

The majority of images that we have of the Cochno Stone originate from the 1937 visit of the archaeologist Ludovic Maclellan Mann, who strikingly painted in the markings to illustrate his ‘archaeo-astronomical’ theories of their meaning. Needless to say, this is not practice that would be acceptable today! In addition to this, in the absence of consensus among experts as to what they actually mean, the cup-and-ring markings are arguably (as much as anything else) examples of Neolithic graffiti. These factors of the story pose fascinating questions about the contemporary worlds relationship to its ancient past and who it belongs to. [Factum Foundation].

In exploring the site of the FAERIE KNOWE on Carman Muir, we came across a lichen on the side of a rock that looked just like these ring marks. It had tight concentric circles. It is known that some lichen were used for medicinal purposes. While not unknown elsewhere, it seems that this neatly arranged pattern of circles in a lichen is not that common. Was it believed to have had special properties, perhaps hallucinatory? If so, were these carved rings representative of them? And the carved "cups" recepticles? index.asp?pageid=715915

We may never know the real reasons, but we can speculate.

The following three photos are used here with permission of the University of Glasgow. © 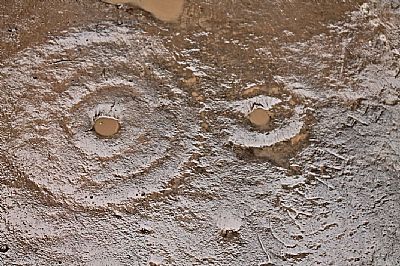 Water has been used to highlight the concentric circles. 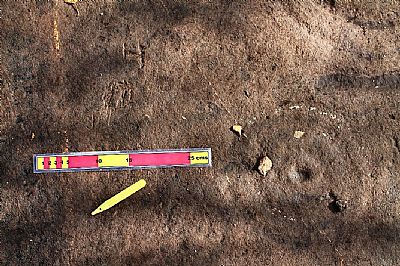 Some unfortunate graffiti is shown alongside one of the concentric ring engravings. 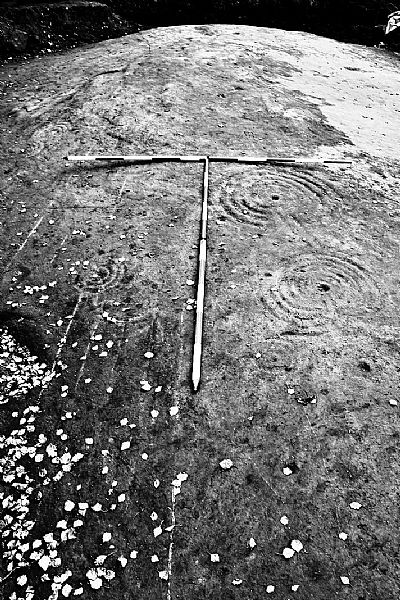 This photo illustrates the scale and complexity of the main stone. 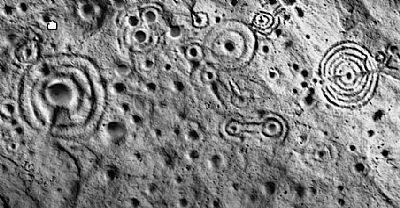 This is an extract from a 3D scan of the surface of the Cochno Stone.

FACTUM FOUNDATION website : https://www.factumfoundation.org/pag/234/Cochno-Stone-Test-Excavation This has an excellent illustration record.

SOCANTSCOT website with a video talk by Kenneth Brophy : https://www.socantscot.org/resource/revealing-the-cochno-stone-by-dr-kenneth-brophy/ In this video Kenneth Brophy talks about when the main marked stones were briefly exposed for research and recording.