ACCESS : Can be a bit of a scramble. Accessed from Milton Brae, where it turns south west at Overtoun House gates.

///cabbies.learns.than The path up from Milton Brae.

This rocky outcrop sits above Dumbarton to the west of the road to Overtoun House. Below it is the small expanse of water called Loch Bowie. Dumbowie is also known as Dumbowie Hillfort or Dumbowie Dun, but these are unnecessary derivatives of the name as Dum or dun signifies as strategic fortified hill anyway. Some speak of it as the Camel's Hump due to its two high points, but the main point is fairly round.

A small Iron Age HillFort was located here. It appears to have been part of a network of similar forts across this area. From here at 152 m above sea level, it is possible to see across the Clyde or to the distant hills. 1.5km upriver to the East is the Vitrified HillFort on Sheep Hill, site of the Greenland Cup & Ring Markings. 2.2km downriver to the West was Alt Clut Fortress (Dumbarton Rock) and 6.5km away to the NW was Carman HillFort.

Defensively, the Fort had circular Sandstone walls, now mostly covered in vegetation but visible in some places, and some terraces on the SE side. Excavations of the Fort during the 19th century revealed small stones with Cup & Rings on them, as well as a boulder some 40m below the Fort with a Cup Mark on it. [Megalithic.co].

*1.5km upriver to the East is the Vitrified HillFort on Sheep Hill, site of the Greenland Cup & Ring Markings.
*2.2km downriver to the West was Alt Clut Fortress.
*6.5km away to the NW was Carman HillFort.

From Carman Hill to Sheep Hill is only 8km, and in this area are at least 4 Iron Age Hillforts. Quite a high concentration, and along with the Crannog at Dumbuck, and the Neolithic Cairn on Carman Hill, this area seems to have been inhabited by humans for at least 5,000 years, but probably more. [Megalithic.co].

A walk here can be rewarding. The Overtoun House parking is usefull. 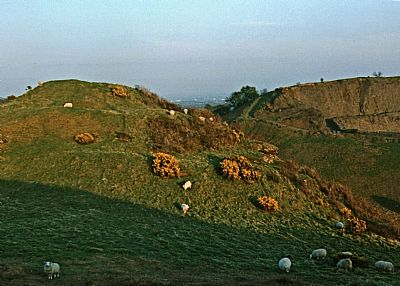 This is the view from the first rise or hump across to the main rise where the actual fort was. You can see the terracing. Beyond is the quarry, itself once a very prominent hill. 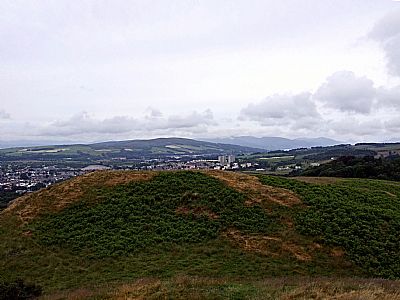 From the higher rise you can see back to the lower one. Dumbarton is beyond, 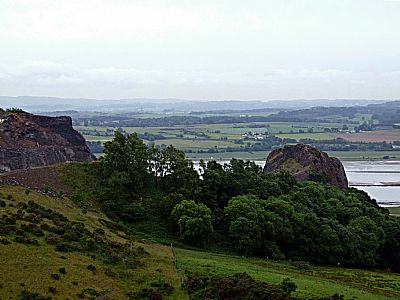 Looking back towards the quarry and the Clyde. 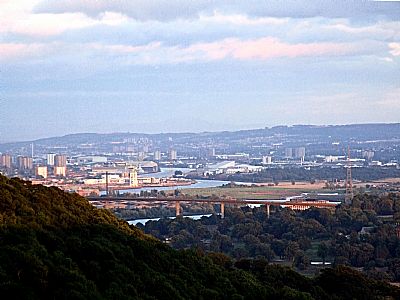 From the right vantage point you can see past the hill with the quarry to the Erskine Bridge and towards Braehead.