FORTH AND CLYDE CANAL

ACCESS : Easy walking or cycling along the complete tow path. Of course this was meant to be tranversed on the water. For that see the links below.

///wallet.robe.soil The Canal at Clydebank where it borders with Knightwood.

In an age before the benefits of rail and road transport, an era though of the opening up of industries acrross the country, other means of bulk transport were needed, both to internal markets and beyond. Both east and west of Scotland's central belt had good harbours, but how to get the goods to them without going right around Britain? The answer was simple : create a canal.

Priestley, writing in 1831, said: "The first act of parliament relating to this canal, received the royal assent on the 8th of March, 1768, and it is entitled, 'An Act for making and maintaining a navigable Canal from the Firth or River of Forth, at or near the mouth of the River Carron, in the county of Stirling, to the Firth or River of Clyde, at or near a place called Dalmuir Burnfoot, in the county of Dumbarton; and also a collateral Cut from the same to the city of Glasgow; and for making a navigable Cut or Canal of Communication from the Port or Harbour  of  Borrowstounness, to join the said Canal at or near the place where it will fall into the Firth of Forth'." [Wiki].

The result was an incredible engineering feat. Traffic was heavy from coal laden canal barges to Clyde Puffers designed to suit the shallow water and narrow widths.

But as road and rail transport grew, the canal suffered disuse and misuse.

Up stepped a bunch of people keen to return the canal to its former glory. Well if not an industrial artery, then as a pleasant alternative means of transport, a place for recreation. The Forth and Clyde Canal Society was formed by a group of canal enthusiasts who felt that the decline in the canals of Scotland in the 1960s had to be reversed. As thet say on their website :

"We believed these monuments to our industrial past could be put to use in the future for the benefit of local communities and we could see that this decline in the canals needed to be highlighted to local and national authorities.

After the completion of our main goal to have the canals fully reinstated for public use, we continue to support, promote and use the Canal in various ways. You can join us in this support by chartering one of our three vessels for an event or hire for a boat trip, by enjoying one of our historical presentations or by joining the Forth and Clyde Canal Society".

The western end, or beginning (depending on how you view it) of the canal is at Bowling. It terminates at a basin complete with historic administrative buildings and modern service facilities. This point was chosen as it was a suitable place to enter the tidal reaches of the Clyde. Close by is Bowling Harbour.

The tow path follows the whole length of this canal and its branches including the Union Canal into Edinburgh. It makes a great walk or cycling route. It is almost flat, rising at each lock in easy ramped approaches. While you go along the tow path, imagine it in its heyday with plodding draft horses assisting the barges until their coal burning engines kicked in.

For more on the features along the West Dunbartonshire section of the Forth and Clyde Canal, see the separate entries below this one. 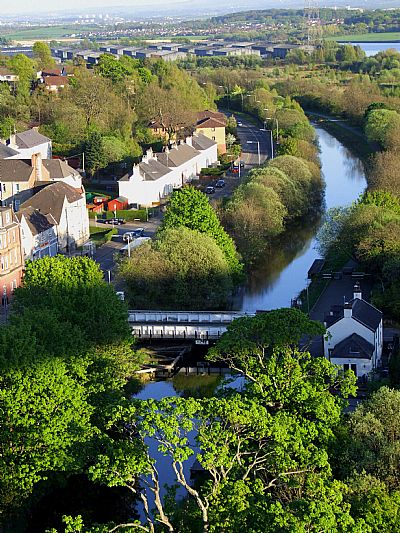 This view of the canal through Old Kilpatrick is from the Erskine Bridge. 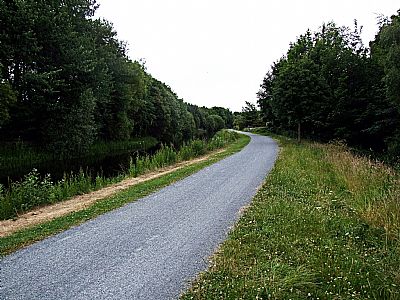 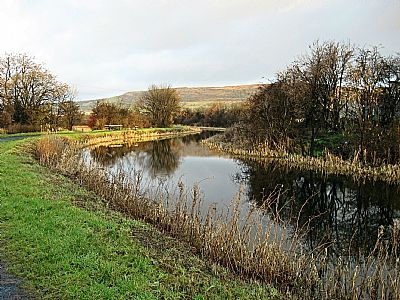 Two views of the canal between Bowlng and Old Kilpatrick. The tow path, now a cycle path, is excellent for most of the way to Grangemouth. 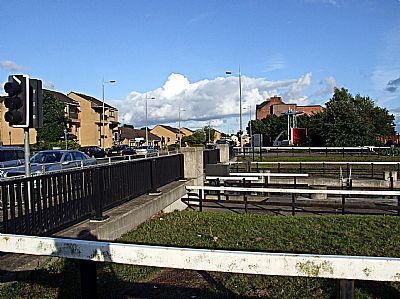 The drop-lock under Dumbarton Road near Duntocher Road and Beardmore Street, Dalmuir. 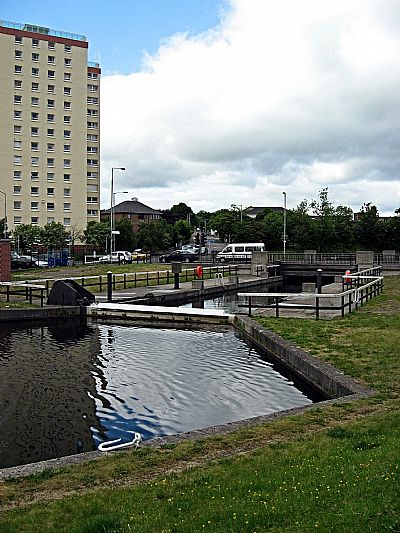 As the canal dips below Dumbarton Road, between Duntocher and Beardmore Roads, it does an amazing thing. Instead of disturbing the road with a regular lock or raised bridge, a drop lock has been installed. This takes the water, and any craft withing to pass this point, down under the road. (Yacht masts dropped of course). 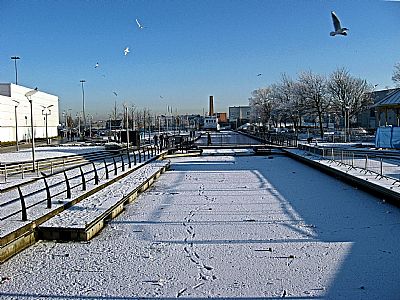 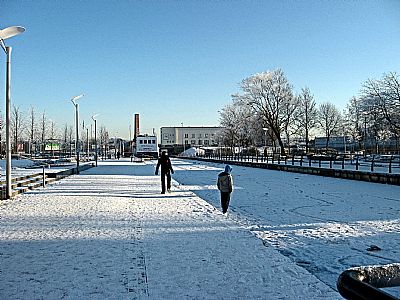 These two photos taken in the winter of 2010 show the canal as it passes through the Clydebank Shopping Centre. The water had frozen sufficient to walk on. But that is a very foolish thing to do. You cannot be sure that you will not fall through. If the sheer cold doesn't cause severe cramps and pain, the breaking ice can cut you. 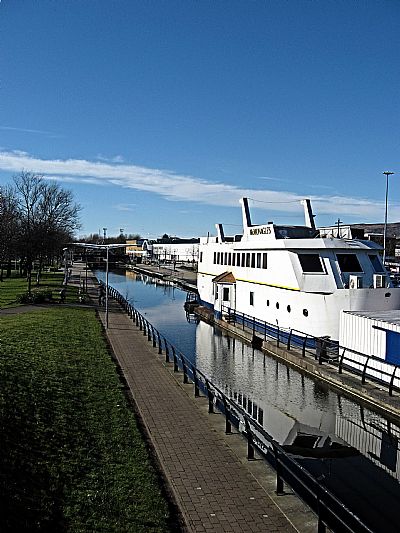 Perhaps one of the longest serving boats on the canal, the chippy. But actually it is a building that just looks like a boat.

WIKIPEDIA :  https://en.wikipedia.org/wiki/Forth_and_Clyde_Canal#:~:text=The%20Forth%20and%20Clyde%20Canal%20is%20a%20canal,the%20port%20of%20Glasgow%20on%20the%20west%20coast. This gives an intersting diagram of the whole canal indicating the locks along the way.