ARDOCH on the Firth of Clyde

ACCESS : This cluster of houses is on the main road between Dumbarton and Cardross. Access to the shore is easy on foot, but be aware of the need to park away from the underpass as described below. This necessitates crossing what can be a busy road, or walking on its rough verge.

///cringes.fall.vowed Footpath down to the shore.

This is small cluster of houses on the road out of / into Dumbarton or Cardross, depending on your point of view, yet it has some features worth noting. Technically it is outwith West Dunbartonshire and on the Argyll and Bute side, but tends to feel like part of Dumbarton. Three houses of note are Leabank House, Burnbank House and Ardoch House (all private).

LEABANK HOUSE : On the very edge of West Dunbartons is this large house built in 1857 with stables and a coach house; a lodge, a timber chalet and an area of parkland and woodland. Although not a listed building, the main house has been described as a fine example of a Victorian villa.

BURNBANK HOUSE : This is a lovely large old house overlooking a deep garden and beyond the Firth of Clyde. An interesting feature is the pointed arch upper side windows. Naturally it sits alongside a small burn.

ARDOCH HOUSE : The listing text tells us : Circa 1780 with mid 19th century tower addition and alterations and that Robert Cunninghame Graham of Gartmore acquired estate in 1770 and built Ardoch Cottage a Georgian Colonial style cottage with splayed wings. The central tower is a later addition. Not to be confused with Ardoch House, which has been demolished. What is now called Ardoch House was built as a cottage.

As for Cunninghame Graham, "Don Roberto", well, he was a Scottish politician, writer, journalist and adventurer. He was a Liberal Party Member of Parliament (MP); the first ever socialist member of the Parliament of the United Kingdom; a founder, and the first president of the Scottish Labour Party; a founder of the National Party of Scotland in 1928; and the first president of the Scottish National Party in 1934. See below for a link to more about him.

Aas noted at the outset, there is access here to the shore and at low tide to the YAIRS (discussed separately). To reach the shore from here, park either at the large but rough layby on the shore side, or in the space at the farm road junction on the Dumbarton end. (You cannot park near the underpass itself). This is a busy road, so caution is required to cross it. From there on it is a short walk down under the railway. It is advisable to check the tides before approaching as there is little walking space above the high level mark. 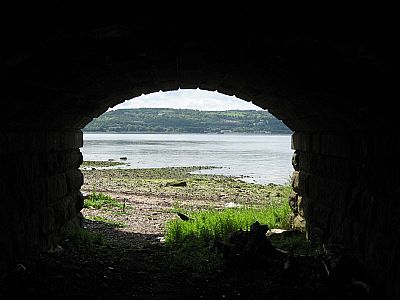