ACCESS : Private, but can be viewed from the road.

Look for this ancient looking pair of buildings known locally as Bruce's Stables, under listed buildings and you will not find them; at least not under this name. They are more properly called Braehead Cottages. Local lore attributes this whole hill to Robert the Bruce. [This is discussed under BRUCEHILL AND CASTLEHILLand ROBERT THE BRUCE CENTRE]. Somehow these buildings appeared to confirm the tradtion that he lived nearby. Were they his stables?

These were in fact designed and built as cottages, probably for farm labourers. The exact date is unknown, some time in the late 18th century, but the architect is. He was Charles Ross of Greenlaw. They form a symmetrical pair of farm cottages for the Ardoch estate. Their ancient apprearance is due to their Gothick style. A central gable is the remains of a smaller building and this together with a screen wall with large gates retain the sense that this is a single grouping with courtyards.

The central building is no more, except for the facade, but the two cottages remain, stretching out behind the stone facades in very different and more familiar lime washed cottage form.

It is those outer facades that intrigues us. The listing text notes them as :
Each cottage 3 bays, gable towards road, central ogival headed-doorway with columned jambs to each, flanked by pointed windows with blocked label stops; 2 incised crosses flanking blocked quatrefoil in gable-head above string course; original gable crenellations removed from No. 22. Banded clustered columns at angles; pinnacled gables. Slated roofs. Former central cottage (now only a screen wall) also 3 bays, broader, but similarly treated. It is amazing what you can find in Dumbarton's suburbs.

They were originally called "Foule Hole". The word "hole" may not be quite as we interpret it today. Other properties in this area had similar names and some were spelt "houle". This may in fact refer to "hill", a frequently used name even today for homes. 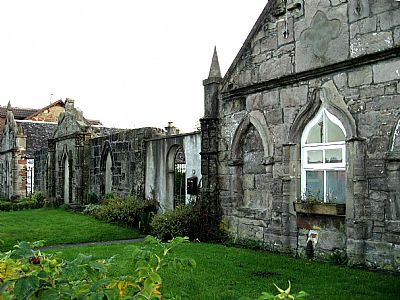 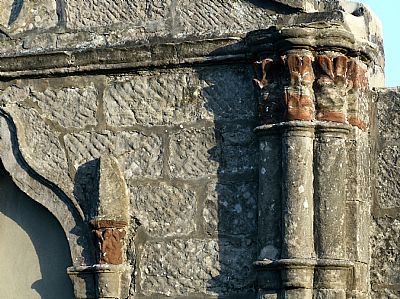