ACCESS : Some of these can be visited, but you need to know what to look for and where.

Clydebank was heavily damaged by Luftwaffe bombers during what we know as the Clydebank or Clydeside Blitz. The shipyards and other industries along the Clyde were likewise targeted. Dumbarton too was badly hit, but escaped some of the worst impact. Why? To understand that we need to see the Luftwaffe strategies more broadly.

They were evidently intending to destroy shipyards, both manufacturing and ports of other centres along the Firth of Clyde as well and this must have influenced their directions of travel. Greenock was to suffer a Blitz as well. But other smaller targets were hit too. Cardross farm houses, a church and the golf club were hit too. Whether this illustrates some naivety on the part of the pilots or sheer vengeance, we cannot be sure. Remember that the technical levels of the time were very basic compared to today and a compass and visual contact were the main means of identifying targets. That could be fairly easily misled. And misleading the attackers was an important defence mechanism of the defenders.

A total of 237 decoys were built to protect 81 towns and cities across the UK, constructed around four miles from their protection target and at least one mile from any other settlement. A total of 16 so called ‘Starfish’ decoy sites were built as part of the Glasgow and Clyde Anti-Aircraft Defence network, including in the hills above Dumbarton.

This type of decoy was known as Starfish, the codename given to a system of Special Fire or SF decoys. They were created by Colonel Sir John F Turner of the Royal Engineers. Their aim was to deceive enemy bombers and reconnaissance aircraft. Day decoys were designated as K Sites, and Night decoys as Q Sites. Night decoys were further classified as QF for Fire sites, and QL for Lighting sites. Starfish, Special Fire or SF decoys denoted Civil decoys, while those denoted as Q sites were military, being Army or Navy decoy sites. Some used techniques borrowed from stage and film and simulated factories, railway yards, docks, urban layouts and the effects of incendiaries and bombs. To achieve the effect lighting would be laid out in the shape of streets (or runways as appropriate), and left on until attackers had a chance to see them from a distance, then extinguished as if in response to an air raid warning. The real area would have been blacked out well in advance, thanks to advance warning by Britain's closely guarded secret radar system, and sightings reported by the Observer Corps. The Starfish sites would ignite controlled fires, laid out to simulate the plan view of shipyards and production facilities, which again would have been blacked out in advance of the attacker's arrival. The fires could be relatively simple fuels pools, ignited as required; fire baskets containing materials soaked in an mixture oil and pitch; and more sophisticated burners, where burning oil and water could be mixed, resulting in a brilliant flare as the water changes to steam and expands rapidly, converting the dense, slow-burning fuel oil into a fast-burning mist.

While the technique was effective against targeted bombing raids, especially at night when there were no other visual cues for bomb aimers or navigators to refer to, the decoys were rendered ineffective by large scale area bombing, such as that seen during the Clydebank Blitz of March 1941. [Secret Scotland].

West Dunbartonshire had Starfish Decoy sites on Carman Muir and Auchenreoch Muir. There is no longer evidence of full replication of potential targets, but you can find the slabs on which some were laid and the bunkers for those manning them.

That on Carman Muir was located on the slopes overlooking Castle Hill. The bunker remains above the very end of Kipperoch Road (237369, 677578) and the actual site up the hill from that (236907, 678197). There are several small bomb craters (not to be confused with some excavations for rock and some early hut rings).

Some craters seem to have been from hits from west to east ie with the spoil mainly to the east. It is just possible that some of the bombers were returning from already hitting places across the Firth of Clyde such as Greenock and intended to attack here after that. That may explain why some craters are fairly small. They could be the dumping of remaining ordnance before running the risk of being hit by defending gunners while still laden with explosives. It may also explain why such neutral targets in nearby Cardross were hit.

Canmore notes a decoy site at Jaw Reservoir (NS 5007 7566). A control shelter (NS57NW 17) and a single enclosure are all that is now visible of this World War Two Civil QF/QL Decoy. 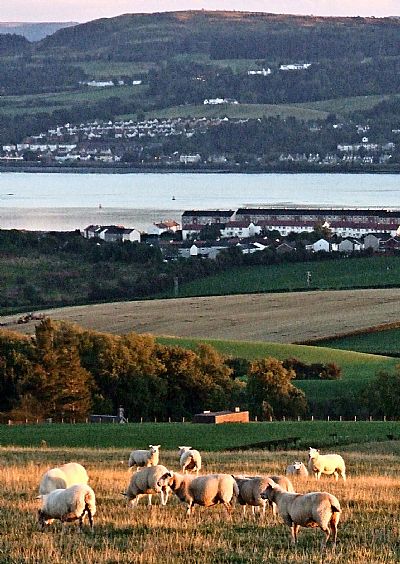 Carman Muir : That "shed" in a field on Kipperoch Farm is actually the control bunker for Starfish site 13a. It was covered with earth for protection and camaflouge, but over the years has been denuded of that and become exposed. 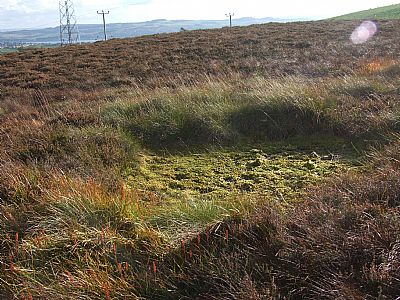 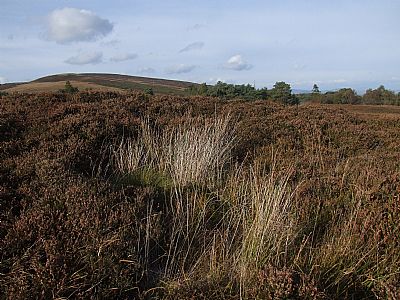 Carman Muir :These two holes in Carman Muir are overgrown and filled with water. Their shapes suggest bomb impact rather than other causes. 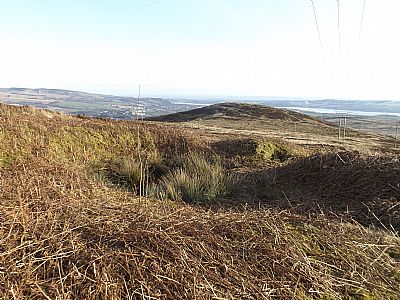 Carman Hill : This larger crater is on the side of Mount Mallow. That rise beyond is the lower of two and has the citadel remains on it. 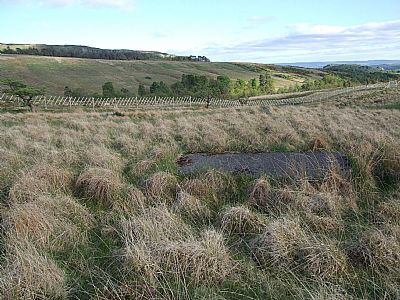 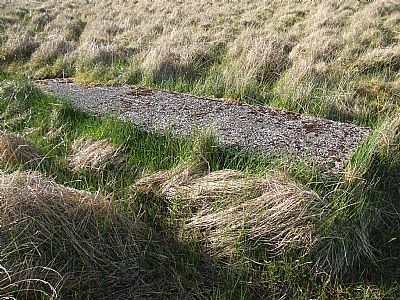 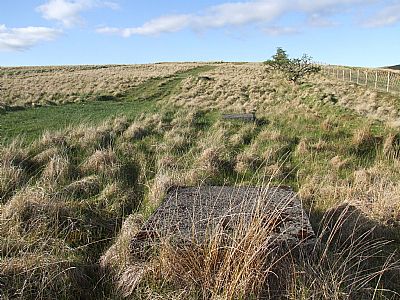 Remnants of the concrete bases on which the decoys were mounted. 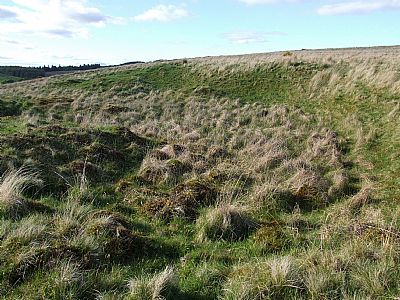 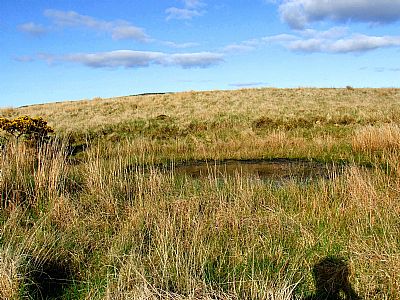 Two of the bomb craters. These are larger than those on Carman Muir.