ACCESS : Easy access for all to the Robert the Bruce Heritage Centre. Other potentially related places vary in ease of access.  The centre is right on the station platform in what used to be the booking and waiting hall. Check opening times.

The great man, King Robert the Bruce, had a very eventful life and a very prominent position in Scottish history. He is reputed to have settled in this area towards the end of his life. Quite where is not known. Castle Hill and Bruce Hill, not that far away were thought to have been where he had a castle. That is now thought incorrect. A partial internment in the small chapel of St Serf in Levengrove Park seemed to reinforce this perception. The Parish of Cardross, covered this whole area from the modern day town of Cardross through to the Clyde to the south and the Leven to the east. This was not yet Dunbartonshire. Indeed, the town of Dumbarton was not yet recognisable as such and even referring to Cardross as a "parish" is useful, but really premature. It was a district. Elsewhere in this website, the connections to Brucehill and Castlehill are covered as are Bruce's Flagstaff and other places and features that were imbued with connections to him way after his presence here.

We need to refer the references to "Cardross" very broadly. This actually leaves the consideration of his last home rather wide. We know that he died at his home in the Parish of Cardross on June 7, 1329, from an illness which some say was leprosy.

14th century records that the king resided at the “manerium de Cardross”. So we are sure about the general reference to Cardross. But what does manerium mean? The term refers to a manor or manor-house or an estate on which there is the right to hold a manorial court.

So does this mean that Bruce lived not in a castle, but in a manor?

Local enthusiasts and historians believe it was somewhere in the vicinity of what are now Dalmoak and Mains of Cardross Farms, an area adjoining Renton known then as  Pillanflatt or Pailleanflath. That means tent of the great hero. Members or the local Bruce Heritage Centre and the Strathleven Artizans have found stone and medieval objects at a site that appears to support this. It is also pointed out that in the 14th century it would have been next to the Leven which has shifted its course over centuries, and it would have been surrounded by woods and very little farmland. Although much of this area has since been disturbed by farming and by topsoil removal, you can actually envisage this as you go down the path next to the Leven.

The Mains of Cardross Farm is no more and and remains can be a false clue, but this is still a very possible spot for that of Robert the Bruce's mansion.

This of course is hidden history. A good story, but hard to convey. In order to promote the Renton connection to Bruce those enthusiasts established a trust and set up a small museum dedicated to Bruce. It is this which you can visit at Renton Station. Although the centre is small, the group are certainly enthusiastic and will willingly tell you about what is known in detail, their experiences in searching for proof and the loose ends left by theories.

There are various versions of the theories on the actual spot. Lairich Rig writing on Geograph.Org gives some very interesting speculation.

The following extract is taken from a map reproduced with permission from NLS. (See below). 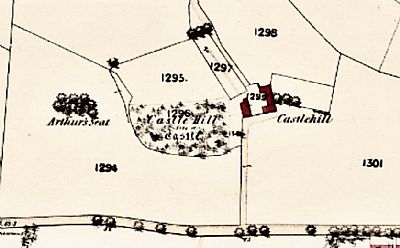 This extract from an OS map of 1860 shows an outcrop in Brucehill as a castle. That mound is likely to be natural and not a man-made motte. It is also too small and low for a suitable defensible structure. Earlier maps refer to Castlehill, but not an actual castle. The application of the name of "Castle" appears to be later. Similarly "Arthur's Seat" has been applied to an outcrop through sentimental association. 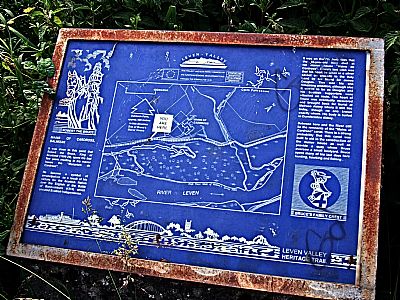 Much more likely is the suggested site of King Arthur's last home on the banks of the Leven. Information boards erected by the council suport the premise. The Mains of Cardross Farm is shown with an idea was to where the mansion was. 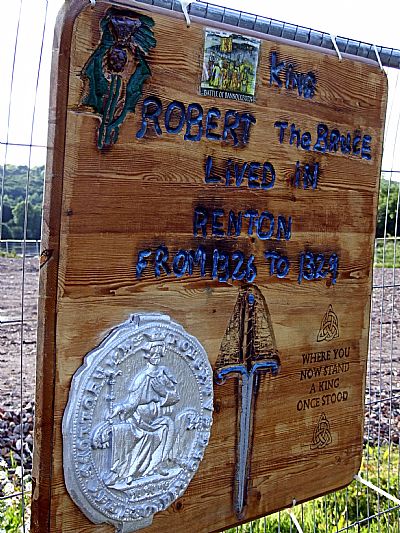 The local enthusiasts through the Robert the Bruce Centre are very convinced as to this being the correct location and have erected this sign on a fence. 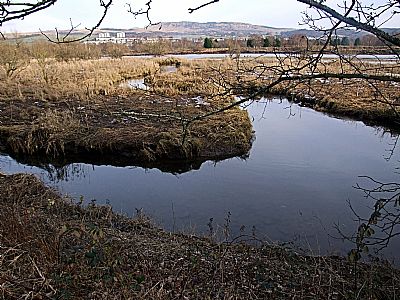 If you look back on this area of riverbank just a short way further downstream you will see a marshy area. This could have been a benefit in terms of a means of creating a small personal harbour and what appears to be canals corresponds to that reputed to have been created for his boats.

ROBERT THE BRUCE CENTRE : The Strathleven Artizans run the King Robert the Bruce Heritage Centre and also a charity called the King of Scots, Robert the Bruce Society.  : https://www.facebook.com/RobertTheBruceHeritageCentre/