A small garden sits alongside Dumbarton Road at the corner of Gavinburn Street. The very name of Old Kilpatrick raises the pride of residents. For the moment let's leave that aside and consider the garden itself. It demarcates a village well that, alas, no longer exists. A sign explains and informs.

When you take in the attractive scenario of the garden, consider that this was on the edge of a large Roman fort, one that subsequently became known as Old Kilpatrick Fort.

The parish was named Kilpatrick, but was split into two parishes in 1649 by an Act of Parliament. These were then called Old (Wester or West) and and New Kilpatrick (also known as Easter or East). The village took on the name of the parish of Old Kilpatrick. [Wiki].

With regard to the village wells, the sign in the garden is quite informative. Although it is a modern sign, the text (shown in italics) was written back in 1943.

Prior to 1855, the village population was entirely dependent on water for domestic and industrial purposes from wells. This was the usually the norm up until this period. All towns and villages in West Dunbartonshire, as anywhere else, would have a series of local wells, often in the main roads or at least at easily accessible points. There were at least four in Old Kilpatrick. The Toll or Townhead Well was situated at the eastern gable of Mount Pleasant Place. The Pump Well stood stood in front of the shop occupied at this date (1943), by Archibald Paul, Newsagent. The Trees Well, or as local tradition has it, St Patrick's Well, is still a landmark, and is open to view opposite Kirkton houses. The Ladies Well is situated about seventy yards to the east from Ferry-dyke houses.

It is fairly common to find local groups concerned at the deterioration of historical features, try to encourage their repair and preservation. The sign continues ….

During the later part of the nineteenth century, the stone structure of the Trees Well was allowed to fall into a ruinous condition. The Trees Well, you should note, was this well, the one that we now know as St Patrick's Well. Andrew Galloway, a local teacher and minor poet, put his concerns into verse. You can read that in full on the sign.

The well had to be closed in 1893 because it had got too polluted. It stayed that way for many years and was eventually refurbished and reopened in 1932, albeit as an aesthetic feature and not for drinking water.

Today the site is marked by this garden which was redesigned by the West Dunbartonshire Council in conjunction with the Old Kilpatrick Community Council in 2001 for the enjoyment of the local community.

Of the two names for this well, St Patrick's Well or Trees Well, the former is the one used today. The historical context of this well, simply named after its setting amongst trees, has faded a bit from current awareness. The possibility that it should be associated with St Patrick may be very tenuous, but it nevertheless catches the public sentimentality and imagination more. Is it in fact just remotely possible that St Patrick used this well at the time the Roman fort was here and before it was reworked for use by a much later community?

The association with St Patrick is much more than simply a saint adapted by the local church. It is a long standing legend. To judge whether this has any grains of validity, lets consider a few factors.

This was the very western edge of the Antonine Wall and the site of a major Roman fort. The fort would have been manned by a large contingent and with the Clyde being saline and there being little in the way of freshwater burns in the area, they would have depended to a large extent on wells.

Now this is where it gets both interesting - and debatable.

During most of the existence of this well, it was simply known as Trees Well. Sometime around the time of its reinstatement it became called St Patrick's Well. That seems to imbue it with a sacredness that it does not really deserve. Of course the village had long been known as Old Kilpatrick, a name derived from Kil meaning cell, sacred place or chapel, in this instance, of St Patrick. That association is in some ways odd. Patrick was not yet a saint when he lived here. That does not prevent a community from associating their church with any saint they choose, but the prefix usually refers to a saint that has lived in that location while in that role.

But we do not actually know for sure if St Patrick came from Old Kilpatrick. The name of the village may indicate more wishful thinking than firm confirmation. It was a name given to the village long after the possible time he could have live here. And it was based more on legend that proper history.

The legend of St Patrick is basically true. We have been handed down fairly reliable records of how he was kidnapped, taken to Ireland, put into service as a captive, “seen the light” and taken up Christianity. And we know that he was born to parents of Roman origin serving the Roman Empire in Britain. We even know the name of the place they lived in. The trouble is that the place can be interpreted in different ways. Old Kilpatrick is a strong contender. But so are other places around Britain.

The community of Old Kilpatrick are holding firm on their claim to this being the birthplace of St Patrick. Other places in Britain are too......What do you think?

For more on St Patrick, see the links below. 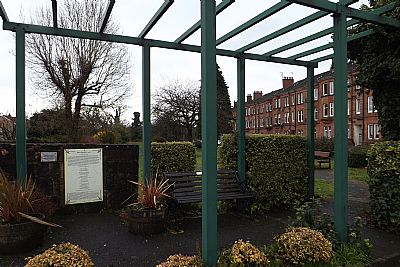 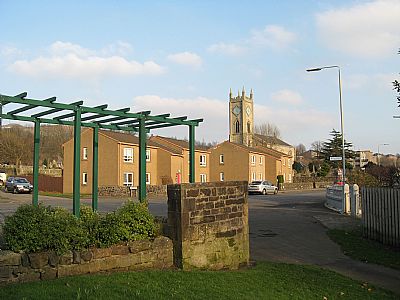 The site of the well with Old Kilpatrick Bowling Parish Church nearby. 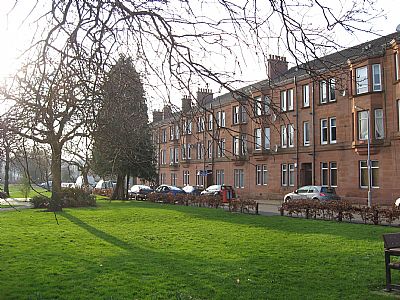 The pleasant small park that stretches out behind the well site.