There are ample lawns, two natural rock outcrops with trees and a single sports court. Other than that this is a park awaiting to happen. A good place to walk the dog though.

This abrupt description should not detract from its association with a very significant figure, 'Don Roberto' Robert Bontine Cunninghame Graham (1852–1936), a Scottish author, politician, traveller and horseman. He was a Liberal Party Member of Parliament (MP); the first ever socialist member of the Parliament of the United Kingdom; a founder and the first president of the Scottish Labour Party; a founder of the National Party of Scotland in 1928; and the first president of the Scottish National Party in 1934. [Wiki]. And during some of his youth he lived very nearby in Ardoch.

It is unsurprising that the locals sentimentally took a shine to this character, claiming as their own, something of him and memorialising him with this park. Cunningham Graham's association with this area is only partial. He also grew up at Finlaystone across the Clyde from here and spent much of his adventurous days in Argentina. The family estate was at Gartmore and the initial monument to him, which was unveiled here, in this park, the year after his death in 1936, was removed in 1981 to there - in spite of the estate having been sold in 1901. This left a sort of gap in a place of remembrance here near where he grew up and the park itself was duly named in his honour.

The little sign lovingly inscribed on a rock at the entrance to the park is only a taste of this propensity to name places such as this after someone with tenuous associations. We are standing here on Castlehill and down towards the Clyde is Bruce Hill. Both of these names allude strongly to King Robert the Bruce.

As you enter the park from Castlehill Road and pass the rock inscribed with “Cunninghame Graham Memorial Park” and “Mony”, you immediately come to a sizeable rock outcrop covered with trees and brambles. On maps from the last two centuries this is ascribed to Robert the Bruce's final abode; his castle. Hence “Castlehill” and Bruce Hill”. That has apparently been disproved with a mansion on the Leven being the more likely option, but this attribution has imprinted itself of the suburbs and residents.

Very close to this rock outcrop is another smaller one. This one has been labelled as “Arthur's Seat”. There are “Arthur's Seats” all over the country. Such appellations are rather fanciful and romantic.

And “The Mony”? Locals would refer to the now long gone monument to Cunninghame Graham by this abbreviated name as somewhere to meet and it stuck. This inscription that you see today reminds us of that. 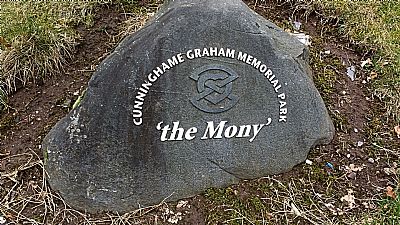 The replacement monument to Cunninghame Graham - "the Mony". 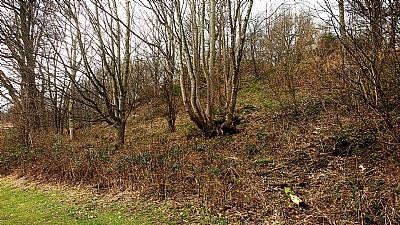 The motte of Bruce's Castle. Really? It appears on maps from about 1860 as such, but this appears to be wishful thinking. 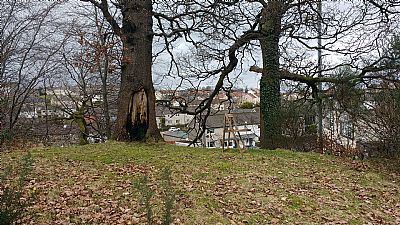 This small hill is has some nice mature trees on it - and a lot of brambles. 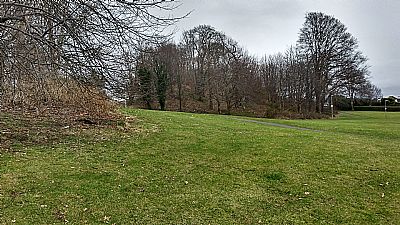 To the left in this photo is Arthur's Seat. Another fanciful attribution. That is "Bruce's Castle" site just beyond it. 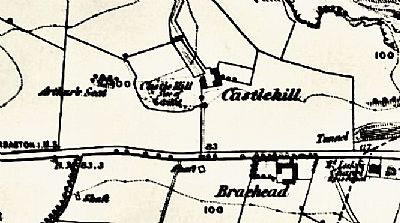 This OS map dates from 1860. You can make out the outcrop labelled as "Castle Hill - Site of Castle" and to the left / west of it "Arthur's Seat". The combined sites of that of the "castle" site and the area in front of it roughly align with the current extents of the Cunninghame Graham Memorial Park.