Archibald Joseph Cronin (1896 - 1981) was born in Rosebank Cottage just beyond Cardross overlooking the Firth of Clyde. Cardross at the time was within Dunbartonshire. His parents moved and he was to grow up in Dumbarton and attend Dumbarton Academy. He won a scholarship to study medicine at Glasgow University and qualified as a doctor.

He interrupted his studies to serve as a surgeon in the Royal Navy in the closing stages of World War I. At the end of the war he then returned to Glasgow to graduate with the first of a string of medical degrees and honours.

In the early 1920s he moved to Wales as a GP, and in 1924 he was appointed Medical Inspector of Mines for Great Britain, subsequently establishing a successful practice in London. In 1930 he spent three months recuperating from ill health in the Highlands and during that time wrote his first novel, "Hatter's Castle", which became an immediate success when published the following year.

This was to be the first of many very significant books, but this one stands out when discussing Dumbarton. Although entirely ficticious, it is very recognisably based on Dumbarton. The town and the family home may be called Levenford and other place names a little familiar, but the River Leven is very real as are the High Street, Church Street, College Way and the Vennel (roughly the location of the Artizans Centre). Even the key figure, the hatter, has a real local inspiration. His maternal grandfather was a hatter in Alexandria - presumably a very different person to that in this book. The book is also a useful impression of Dumbarton in the 19th century - the modes of travel, sawdust on the pub floors, fashion etc are all there.

This book was so successful that Cronin gave up mediciine. But medicine was never out of sight.  "The Citadel"was published in 1937. In it he drew on his medical background in the South Wales coalfields and in Harley Street to highlight the huge inequalities that existed in health provision in Britain at the time. This book is often credited as the inspiration for the National Health Service, introduced in Britain in the years following the Second World War. 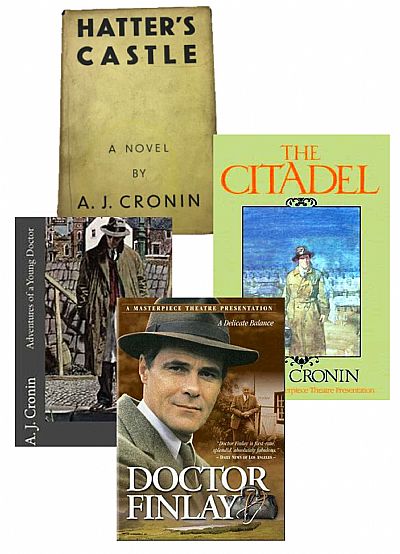