The West Dunbartonshire Council website tells us : The existence in Dumbarton of a building popularly known as Bruce's Stables, and the nearby housing scheme called Brucehill, have led many to wonder if there is a local connection with the famous Robert the Bruce, King of Scots.

What is certain is that the King died at his manor house at Cardross in 1329. By "Cardross" is meant the Parish of Cardross, and detailed historical research in old documents suggests that the most likely location for The Bruce's house was a piece of land called Pillanflatt, which lay between the extreme south end of modern Renton and what is now Dalmoak farmsteading. All these places were in the medieval parish of Cardross. Here, suffering from some disease (maybe leprosy), he spent the last 3 years of his life. He hunted in the area with hawks, and seemingly kept a lion in a cage, which, as local historian Dr I. M. M. MacPhail once wrote, was armorially appropriate for the King of Scotland

The association of Robert the Bruce remains in the hearts of residents here. Even if his final home was not here specifically, surely he would have been familiar with these slopes and hunted here. In spite of evidence to the contrary, there are still theories about a castle somewhere here. A bit of mystique has grown around it. One such possible site of a castle is alongside Castlehill Road in the Cunninghame-Graham Memorial Park. What appears to be a motte, a natural or man-made mound, is clearly identifiable. However whether this is a correct interpretation is questioned. To add to the air of mythology is a smaller rise locally known as Arthur's Seat.

Some houses have excellent views across to the Clyde. The area has been given some much needed attention in recent years and new housing has been built. We imagine that Bruce would be satisfied. 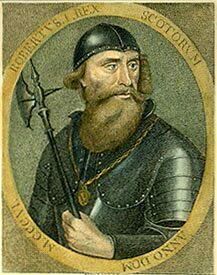