This large and very impressive sculpture is by local artist, Tom McKendrick. The very material, the shapes and forms are all derived from the shipbuilding industry. Sitting atop that structure is a model of the Dreadnought, the ship that had such a vital role in WWI.

The site too is very significant. This is the disembarkation point for the 13.000 workers who were employed by the yard. 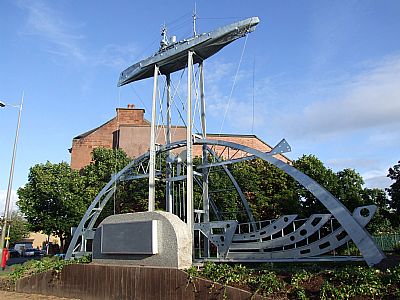 “The Dreadnought presents a powerful vision. It embodies much of our naval heritage and shipbuilding past. In its presence we have the embodiment of four hundred years of naval history, a deterrent, protector and guardian of British interest across the world. These mighty ships were tools of velvet glove diplomacy, symbols of immense national pride and great feats of shipbuilding and engineering skill.

"The Dreadnoughts engaged with pride the minds of the entire spectrum of British society, the public, its builders, and of course their crews and commanders. There are few objects that can make such a claim. "

" I am intrigued by a vision that has no parallel and many contradictions. An object to be feared, admired and perhaps even loved and a ship that became the ultimate vision of centuries of our islands close relationship with the sea. The Ramillies with ease meets all of these descriptions as any acquainted with her history will know.” [Tom McKendrick]. 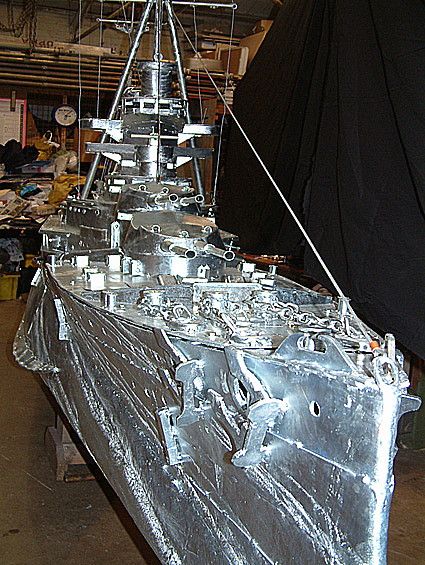 This is a closer view of the Dreadnought sculpture as provided by the artist during its construction.

Supported on four pillars high above is an interpretation of the Revenge Class Dreadnought, Ramillies, launched from Beardmore’s in 1916. This formidable ship was still around in WWII. On the 6th of June 1944 it was ordered to open fire with an eight gun broadside to destroy the guns of the Benerville battery so that the invasion the invasion of Normandy could begin.

Thanks to Tom McKendrick for permissions and support.