ACCESS : Easy access by foot over the fairly solid sandy mud. Care though must be taken with the tides, deeper water and rough stones. Approach can be along the shore from Dumbarton or Cardross or by parking either at the rough layby in Ardoch or across the main road. Then walk down the short road to the underpass below the railway. (Do not attempt to park at the underpass).

This is outwith the modern local authority area of West Dunbartonshire, but is included as it was within the old county area and was a source of fish for old Dumbarton.

You will all have seen these crescent shaped stone walls in the tidal zone between Dumbarton and Cardross and also just beyond Ardmore Point. You may well have guessed that they were some sort of fish trap. And you would be right. But do you know anything more about them? There is surprisingly little on them online. The little that we do find refers more to river fish traps and these would have had the added benefit of the river flow perhaps aided by an outgoing tide if in an estuary. Ours are within the Firth of Clyde as it reaches into the Gareloch. They certainly would have depended on the outgoing tide, but not to the same degree as those found in rivers as the flow is not naturally constricted. While the curved stone wall shape has obvious benefits it is imagined that they would also have had light woven wicker fencing of stakes between which would have been netting or some other means of catching the fish. I.M.M. Macphail quotes the Old Statistical Account : 1792 - 94 when he tells us : “The Zair or Yair fishings, so productive in the parish, seem to be peculiar to it. The yair is a crescent of stones almost four feet in height, which encloses the fish at high water - especially herring and also salmon, the fish being secured from the yairs by a hand-net”. While most of the rocks used would have been found already in the mud and just needed moving, the sheer scale of the walls in length and the size of the rocks used is impressive. Naturally the bigger the rock the less potential for storm and current damage.

It can be very useful to refer to the maps on PastMap and the airphotos from its associated Canmore website. (See links below). These are stone walls which would direct fish with the changing tides. There is one off Ardoch and another two just north of Ardmore point beyond Cardross. They all depend on the fish leaving the shallows as the tide drops. They were presumably more effective then than on the rising tide. More the ebb than the flow. For brief periods twice every 24 hours such shallow water is very low. The curve of the walls concentrates the fish from where they can be speared or netted. The shape of the yairs at Ardmore very obviously traps them on the outgoing tide. The layout at Ardoch at first appears counter intuitive. It seems to be arbitraly located and curved at almost right angles to the coast. What we do not see on the map, but which is evident on the air view is a secondary watercourse in the mud from a small onshore burn and that has been incorporated. In fact there is much more to the layout. And there is something else that is necessary which is not obvious from the maps. To concentrate the fish properly at a point at which they can be speared or netted, the walls need a narrow gap. Now, how to control that gap?

Again referring to the air views are from Canmore: The walls were built of large stones gathered from the mudflats and nearby coast. The upper one of that at Ardoch shows that there is a meandering deeper watercourse within the tidal zone. When you visit it you will see two channels through two gaps. The ebb flow was “upstream” with the water finding a circuitous route into the main river flow. Perhaps this was why this location was chosen. The flow varies over time and would be affected by the flow of a burn entering the firth, but more or less focused on these gaps. Less conspicuous are a few secondary walls and also the remains of posts in the mud ( presumably for woven wicker fencing) that appear to have been a means of channelling both water flow and fish to strategic points. A circle of stones of about 25 metre is diameter just beyond is presumably to keep fish in until taken home. The sheer size of this must be indicative of a single catch. The fish by this time would probably have been killed or at least stunned. Although all this is flooded at every high tide, there would have been sufficient time to catch and collect the fish. The shore at low tide is generally sandy enough to walk across, although some areas can be very muddy.

It is apparent that the greater use of palings in that structure was because of the more dramatic channels in the mud as the tide receded. By comparison the stone structures we find here at Ardoch were responding to a very extensive and almost flat mudbank. It appears that an “eye” or through flow is required to concentrate the fish to where they can be netted or speared. While such "eyes" cannot be clearly seen on the local yairs, they may well have simply fallen in. There are some points that look likely as where the flow has defined channels in the mud.

If we go by the descriptions of the Kirkcudbright ones, that “eye” appears to have been not just a net, but something that could be controlled. In their illustration it is a net fixed to the sides and controlled with a central pole. The gap in the Ardoch yair and tidal channel and the nearby rock circle, (now silted in), were presumably to channel and hold caught fish; a gate of some kind that could be dropped or lifted is a portcullis. In this case, the fish barrier, would have probably been of a light timber construction, even just woven branches, as with wicker, and tied in place. The equivalent in that Kircudbight example is simply a net strung across the opening from a light timber framing, but the principle is similar.

Irving tells us about records of the Dumbarton Burgh of administering fishing rights on the Leven and the fair distribution of fish, mainly salmon, to the community. .Just across the Leven from Dumbarton was the Cardross Parish, a different adminsitrative area. With a lower population and potentially greater catch, it is imagined that much of that found its way into Dumbarton, controlled market or not, and that would explain the great effort expended in building these yairs.

Archaeologist Alex Hale describes yairs in great detail. He notes variations in the trap known from examples elsewhere around Scotland. Some have platforms over the gaps from which a net can be manipulated each time a fish enters it, while others probably trapped several at a time and could be collected later. Hale describes curvilinear wattle and post fences that run roughly parallel with the shoreline, and have been revetted with stones at the base of the posts. The local ones do have lines of poles in the mud, but these appear to have been to support wicker fences or possibly nets to the catch points. There is no sign of net structures over the gaps themselves although if raised and at the points of stronger flow could have been destroyed by heavy weather. The stone walls are now completely covered with seaweed and may be concealing some remnants. 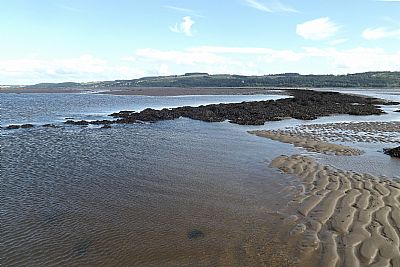 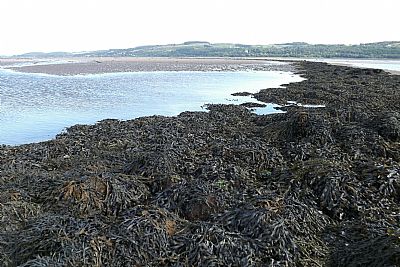 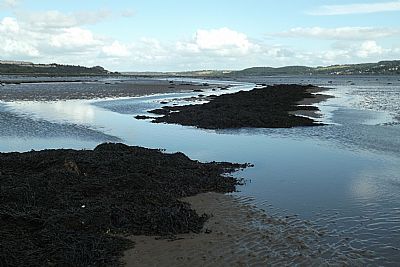 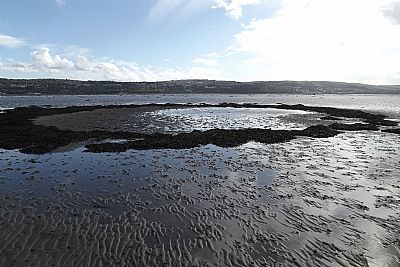