ACCESS : The site is readily accessible even if now housing.

///smooth.skimmers.matter Approximate centre of the works.

The following Turkey Red record needs an important considerations before we start. For practical reasons it is laid out from north to south ie from the source of the Leven heading downstream. This means that they are not in order of date. We start here with one of the most recent. The term Turkey Red is also used loosely to encompass all the textile works along the Leven.

The British Silk Dyers was established in 1929 at a time when the heyday of the industry along the Vale of Leven had already shown signs of waning. Loch Lomond was as ever very popular as a tourist destination and the railway reached right up to it past the works. Balloch was more a place to pass through than linger in and having a large textile works here was quite acceptable.

The site was close to Drumkinnon Wood, which by that time was little more than a cluster of trees. Today that area is the Drumkinnon Gate residential area.

The works was originally under French, then Swiss ownership. Its final two decades were under American control. About 500 employees produced 20 million yards of fabrics a year, using complex modern dyes.

The company ceased trading in 1980 after a boiler explosion. The site lay derelict for years before being developed for housing. 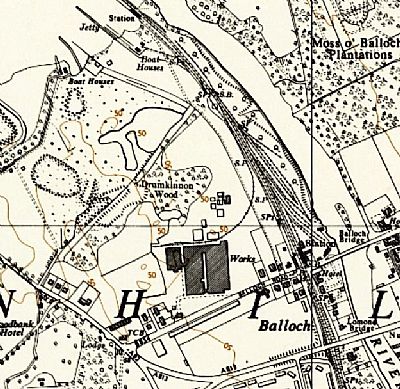 This interesting OS map from 1968 shows the works close to Balloch Road. That site is now Drumkinnon Gate residential area. The field to the west is the overflow carpark for Lomond Shores. The small cluster of houses to the south west of the works is Drumkinnon Road. To the immediate east is the railway that served the paddle steamers on Loch Lomond, but which would have benefited the works and the workforce too. A branch line can be seen curving in to the works itself.