ACCESS : The Antonine Wall crosses the isthmus of central Scotland. It can be accessed to varying degrees along its length. See the sections on forts below for local conditions.

///magnitude.refers.crisp  This is the easiest start / end point if you walk the Wall.

///magnitude.refers.crisp Western start / end point of the Wall right on the river bank.

///ladder.chase.expect Eastern start / end of the Wall within Western Dunabrtonshire. It does of course run all the way from Bo'ness.

If you wish to walk the route in part or completely, a good place to start is at the Old Kilpatrick Fort, but an easier starting point is at the gas governor north of the A82 motorway. To get here : From Station Road in Old Kilpatrick proceed up Station Road. This passes under the A82. Head past the gas governor to the very small parking area (not the area beyond it). From there look for signage. You then head eastwards. This is mainly a grass track that follows the original wall. The route passes across the well defined Golden Hill fort site. From then on it becomes difficult to trace. The West Dunbartonshire section bypasses the site of the Cleddans Fortlet and heads through suburbia and then open terrain again until terminating at Castle Hill, on the very edge of East Dunbartonshire and Bearsden. You can of course walk all the way from here to Bo'ness where the wall ends. 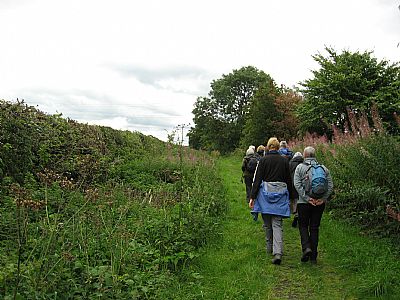 The walking route follows the field boundary which in turn had been set following, but not actually on the Wall's edge. This view is of the path as it leaves the carpark as described above. At this point the Wall is running a little to the left (north) of you.

Old Kilpatrick is at the westernmost end of the Antonine Wall. There was already a fort here before the Wall, but that was enlarged. Those Romans seem to have felt a need for a stronger and more intimidating means of defending their Empire against the local tribes. The Wall was located here as it served as a barrier between north and south and acted together with the Forth Firth and the Clyde Firth. West of here and to the north was a terrain much less conducive to the control by Roman troops. The Romans will have explored further along the coast, certainly to Dumbarton Rock and very likely to Ardmore Point. But to all practical purposes, Old Kilpatrick was the very edge of the Roman Empire in this direction.

West Dunbartonshire residents smugly like to think that the Romans couldn't get past them. This is evidently not true. It is very possible that the locals alternated between compliance, even trade, and rebelliousness. The terrain from this point north proved a more forbidding barrier to the Romans. This though is a very different picture to that on the east side of Scotland. Those Romans had managed to penetrate far northwards.

The building of his Antonine Wall was ordered by Emperor Antoninus Pius in AD 140. Construction under the Roman general, Quintus Lollius Urbicus, started two years later and took six years to complete. The Wall consisted of a bank of turf almost 3m high and 4m wide, topped with an imposing wooden palisade. Alongside it was a ditch as an added barrier and a road along which to move troops and supplies. Sixteen forts (possibly up to nineteen) were built along the length of the wall to house the many hundreds of Roman soldiers that manned it. Here in West Dunbartonshire, we have the sites of three forts and some smaller fortlets.

Perpetual harassment by the locals and the need to redeploy troops elsewhere in the Empire induced the Romans to abandon the wall in about AD 165, less than twenty years after its completion!

In the next sections we will discuss the main features along our length of the Wall from Old Kilpatrick to Golden Hill and from there to Castle Hill which borders East Dunbartonshire at Bearsden.

Historic Environment Scotland (HES, at the time Historic Scotland, HS) liaised with local authorities along the Wall (including West Dunbartonshire) and had it raised to a UNESCO WORLD HERITAGE SITE (WH). The whole process required intensive research and mapping and the results can be seen in the form of a publication in our local libraries. While the benefits of greater monitoring and promotion from higher authority are evident, each local authority undertook to have its own projects and an enhanced degree of planning intervention where that is required. This latter aspect means better control where new development proposals are within or in close proximity to the Wall. The WHS requirements included a better defined barrier zone along the whole Wall within which development had to be either denied or meet very stringent criteria. At a local level, this is controlled by the West Dunbartonshire Council Planning Department.

Community consultations were held at the time of the WHS application and followed up in subsequent years. Community suggestions included improved signage, improved route surfaces and written guidance, both in hard copy and online.

It is a particular challenge to realise those ideals locally. History and heritage is so often hidden. This is the case with Old Kilpatrick Fort, the site of which is under buildings, and much of the "wall" is hardly discernible. But that make it no less important to our history. There is so much still to do, but some signage and an improved car park at a westerly point from which to start walking it have now been realised.

A great deal has been published on the subject and is available online. For a more locally relevant source, the Antonine Wall Heritage Trail published by the West Dunbartonshire Council is recommended. It can be downloaded as a pdf from the link below.

A visit to the Huntarian Museum at the University of Glasgow is highly recommended. Amongst its collection are distance slabs from our end of the Antonine Wall.

For those intent on a more thorough knowledge of Romans in Scotland and the Antonine Wall, a look at Historic Environment Scotland's publications is advised. 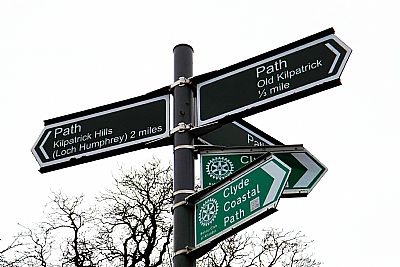 The signage at the point that many people head off to the hills or along the route of the Wall.

West Dunbartonshire residents generally have a pride and interest in the Antonine Wall where it passes through their local authority area. In spite of this and the fact that the council signed up to its promotion and future, promotion is far from sufficient. That sign in the picture above is indicative of that. It indicates a significant walking route from Old Kilpatrick Fort to the next one at Golden Hill. We need more promotional signage, way markers and a proper carpark. The Antonine Wall is so important and so interesting, but is difficult to find. 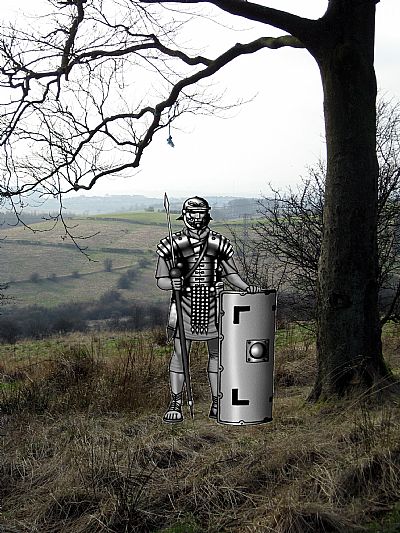 A suggestion has been to erect steel silhouettes of Roman soldiers along the length of the Wall at strategic points. This would encourage visitors to find them all and enable them to envisage those who manned it.

The Wall runs up from Old Kilpatrick Fort (now under a warehouse) to the very edge of the gas governor fence. From there it turns a sharp right / eastwards and runs through farmland almost parallel with the path shown in the top picture.

HERITAGE DAILY : https://www.heritagedaily.com/2021/01/vallum-antonini-the-antonine-wall/136706 This has a useful map and aerial photos.