ACCESS : Easy access on foot, but this is within a traffic intersection. Take care or view from the safety of a pavement.

This is a very prominent feature in Alexandria and to many epitomises the very identity of it. During 2020 (before the pandemic) West Dunbartonshire Council commissioned a team of consultants to investigate various improvements to Alexandria. This fountain was of key interest to many during the community consultations. That process has slowed down in the subsequent months, but not entirely halted. Ideas that came to mind were to enhance the setting by creating a sense that it sits within a public square. The work will include the restoration of the fountain.

The Vale of Leven Project website notes that an old oak tree previously stood here and was a popular meeting place.

The listing text tells us that it was designed by Anderson & McLeod in 1870. It is described as a Ruskinian Gothic fountain in mercat cross form. So what is "Ruskininan Gothic"? The online Free Dictionary elaborates : A very elaborate, highly detailed interpretation of the Gothic Revival in its last phase, from 1860 to 1890  ..... sometimes called Late Gothic Revival....Some architectural historians avoid this designation, regarding the adjective “Victorian” merely as descriptive of an age that encompassed a number of specific exuberant, ornate, and highly decorative architectural styles. Well, even if Ruskin never actually saw this fountain, his categorisation of such creation in stone is surely fitting.

The eye tends to drift quickly to its pinnacle - a heron pointing heavenwards with its sharp beak. A heron symbolises patience. But it is more likely to be intended to be a stork. Storks were often used in Christian art to associate sacred significance. Artists often confused the two. Another interpretation is of a pelican. You can make your own choice, but pelicans were also popular in religious art as they were believed to pierce their own breasts with their beaks to feed their young of their blood. It became a symbol of Christ sacrificing himself for man

The fountain is a memorial to Alexander Smollett. An inscription on it reads "Erected in honour of Alexander Smollett of Bonhill by his feuers and tenants and other friends in the county to prepetuate his name as a kind and just landlord and in appreciation of valuable services rendered to the county both in the local courts and as its representative in parliament AD 1870".

This is obviously not to Tobias Smollett, so well known in the Vale in earlier years for his novels, but to Alexander Smollett, local laird and benefactor. He was a local member of parliament and campaigned to bring piped water to the town.

Many local people are very fond of the fountain. With an inscription like that you would think that Alexander Smollett was very popular as a member of parliament. It seems that opinions were in fact devided. If you follow the link below to the Vale of Leven Project (p3 - Alexandria) you will come across a description of him that is not very favourable.

The listing text describes it further as rising in 2 stages; clustered banded pink granite shaft supporting sandstone parapet, griffin guttae; faceted column supporting cap; lead pelican finial. The fountain is brimming with architectural details and symbolism. Shields, plants, winged griffins...[HES].  It has been suggested that the bold round cantilevered corners are like pulpits from which sermons would be preached.

Those are great griffin gargoyles. The fountain has been inactive for a very long time. The protruding stone half basins were where water splashed into from out of the gargoyles' mouths. Instead they have had plants in them. The protective metal fence around the fountain is a later addition and in the form of spears with piers at each corner supporting Victorian style lamps. it will be great to see all this restored. 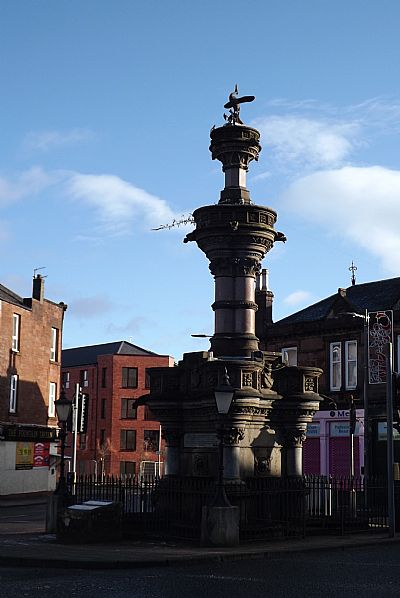 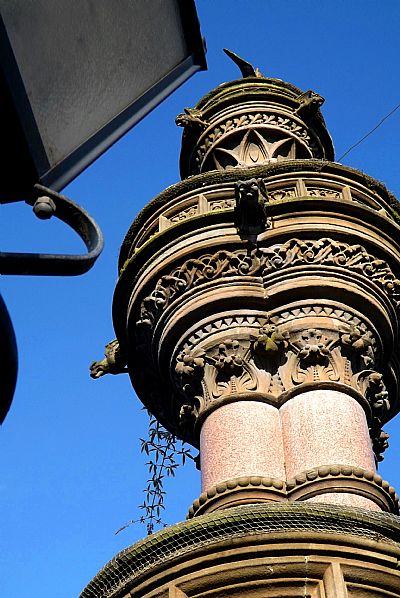 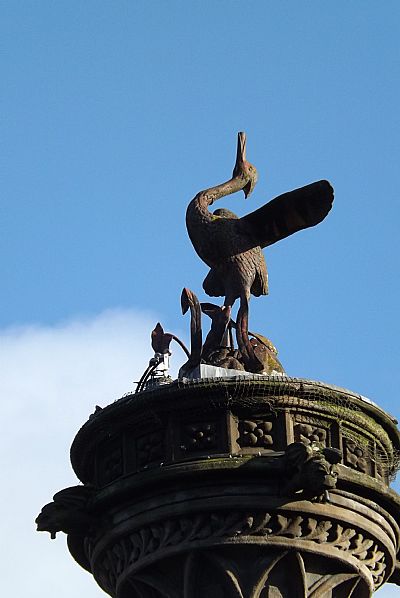 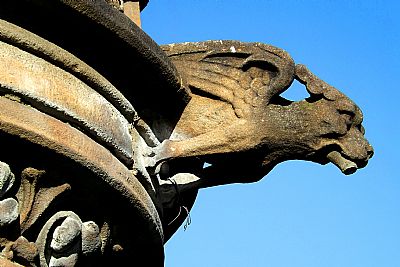 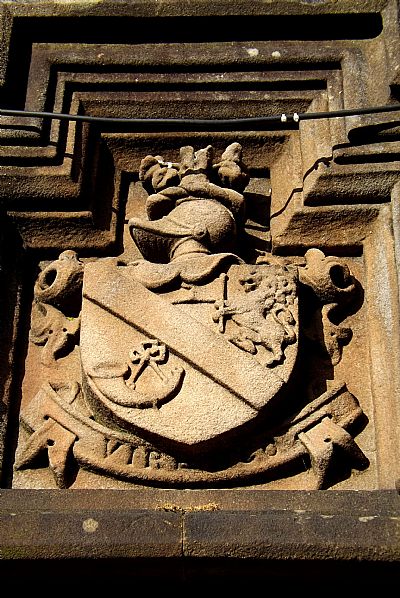 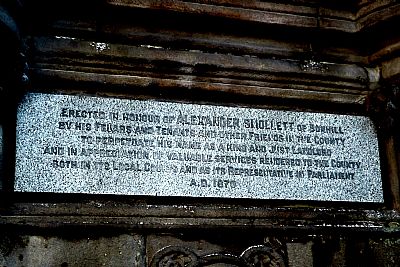