VALE OF LEVEN, from Loch Lomond to near Dumbarton.

The Vale of Leven refers to the valley through which the River Leven swiftly flows, linking Loch Lomond to the Clyde. Today it is almost a single urban sprawl, from the southern edge of Loch Lomond to just before Dumbarton, but this evolved out of several villages which are still identifiable, some subdivided with localised names.

Many of the key features are covered under their own sections on this website.

Although predominantly residential, there are some commercial and industrial areas too. The Vale of Leven in fact grew out of industry; mainly to do with textiles and this is covered under TURKEY RED.

The Vale of Leven derives from the Gaelic, Magh Leamhna. Historically, the Vale of Leven was part of The Lennox. the name of which is from the same source, Leamhnach, meaning field of the Leven; in turn deriving from "elm bank". 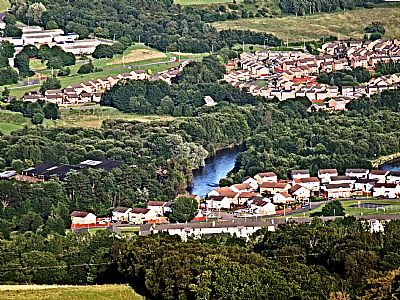 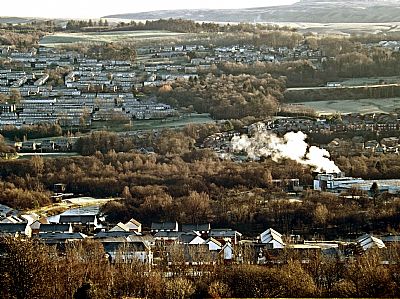 Two views from about the same point above Renton and looking east. Two different seasons with different effects on the vegetation. In the summer view you see a tightly meandering River Leven with the Cordale area of Renton just this side of it. The houses of Stratleven Park are to the right and beyond on the slopes above to the left is the edge of "new" Bonill. In the winter view you see the southern end of Renton with the area called Tontine. Some industry steams away in the cold air across the river. On the hill slopes beyond are the various areas of "new" Bonill.

VALE OF LEVEN PROJECT website. http://www.valeofleven.org.uk/  An excellent source about the Vale of Leven's history.