ACCESS : The slipway is easily accessible. The main factory site is now a modern residential area.

If you walk onto the shore of the Clyde next to Dumbarton Rock and the bowling club you will find a few remnants of past industry. Within the mud are some upright posts that used to hold logs floated across the river for use by the Denny Shipbuilding yard. That works though was orientated onto the Leven and other than that had little use of that shore. But there is a slipway and some other concrete structure. That was for the Blackburn Aircraft Factory. 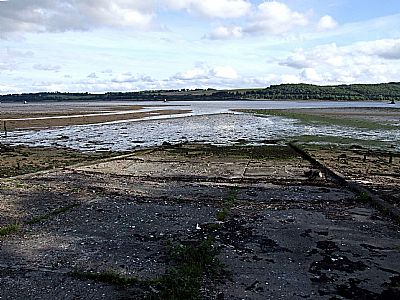 The factory was extensive and was located between the shore and Castle Road. That is now a modern residential area.

The production here of aeroplanes began during World War II as a “shadow factory” for the Blackburn Aeroplane Co Ltd. Several types of aircraft were produced, but it was best known for the construction of the Shorts Sunderland flying boat, of which it produced some 260 over the course of the war.

The factory was also involved in the building of experimental aircraft such as the Blackburn B.20, which had a hydraulically operated retractable float, and wing floats that folded up to form part of the wings.

At its peak, about 4,000 people were employed here. The factory also had links with the Marine Aircraft Experimental Establishment (MAEE) between Helensburgh and Rhu.

After the war, the skills of the factory were turned to the construction of aluminium houses. We would probably simply call them prefabs, but they were known locally as the Aluminiums.