ACCESS : This riverside path is suitable for anyone. Wheelchair accessible. Shared surface with cyclists. Vantage points. You can start at either end or along the way. (Note that it is currently not yet complete for the whole length).

The town of Dumbarton developed on the banks of the Leven just a little upstream from Dumbarton Rock and overseen by its Castle. Most castles have their villages or towns grow symbiotically right below them, but here there was a geographical reason for the separation at the time. The Clyde and Leven would rise at extreme high tides so cutting off the Castle completely; a natural, if temporary moat. But even if the water level was temporary, it left a boggy belt around its landward side. This had its defensive benefits, even if somewhat awkward for daily access. This meant that development here was limited.

But that same boggy area enabled early shipyards to build ships and eventually ease them down the gentle slope, perhaps facilitated by good timing with very high tides. The Leven was comparatively sheltered, yet directly accessible by such craft into the Clyde.

As the shipbuilding industry grew, the terrain was altered. The shallow muddy reed beds were dredged and the spoil used to build up the land. In time two large basins were created. One remains; the other has disappeared under the football stadium. More of all this under DENNY TANK MUSEUM.

Yet further changes occured since then including the large ALLIED DISTILLERY. And that in turn in recent years has been replaced by housing and supermarkets. The new red brick housing has allusions to the previous red brick of the distillery and worker housing. One of the access points to the path is through the housing past the Riverside Church. The housing layout provides vistas through to the church or the river depending on your direction.

Although well used by anglers, the banks of the Leven were somewhat cut off between the Rock and the town centre to the public. The views along here are varied, rich in historical context and picturesque. The West Dunbartonshire Council, inspired by the public consultation a few years ago in the form of a charrette, had studies and a design commissioned. This DUMBARTON WATERFRONT PATH has now been built - at least part of it. When completed you will be able to walk or cycle the whole way from town centre to Dumbarton Rock.

The route meanders along the east bank of the River Leven. Dumbarton has been a riverport for all of its history and this is evident in what you see. At the height of the shipbuilding industry there were two basins specifically for this purpose. One remains. The other though is under the football stadium - completely filled in. The extant basin naturally impacts on the route, but reminds us of a very different vista of ships under contruction. Along the way you will see remants of the past industries such as sections of quayside. Beyond the curve of the river looms Dumbarton Castle on its Rock. Across the river is Sandpoint Marina.

During the long period of industy, the public had no access to the waterfront here. Now after about 160 years, it is again going to be a major pedestrian and cycle link between town centre and rock and castle.

In 1803 Dorothy Wordsworth (sister of William Wordsworth) visited here. We cannot be quite sure of her route from Dumbarton to the Castle (remember there were marshes and boatyards between them then), but it was approximately where this modern path runs. A quotation from her is inscribed in the paving at the town centre end. Here are her words quoted more fully in greater context:

As soon as breakfast was over, William and I walked towards the Castle, a short mile from the town. We overtook two young men, who, on our asking the road, offered to conduct us, though it might seem it was not easy to miss our way, for the rock rises singly by itself from the plain on which the town stands. The rock of Dumbarton is very grand when you are close to it, but at a little distance, under an ordinary sky, and in open day, it is not grand, but curiously wild. The castle and fortifications add little effect to the general view of the rock, especially since the building of a modern house, which is white-washed, and consequently jars, wherever it is seen, with the natural character of the place.

There is a path up to the house, but it being low water we could walk round the rock, which we resolved to do. On that side next the town green grass grows to a considerable height up the rock, but wherever the river borders upon it, it is naked stone. I never saw rock in nobler masses, or more deeply stained by time and weather; nor is this to be wondered at, for it is in the very eye of sea-storms and land-storms, of mountain winds and water winds. It is of all colours, but a rusty yellow predominates. As we walked along, we could not but look up continually, and the mass above being on every side so huge, it appeared more wonderful than when we saw the whole together. 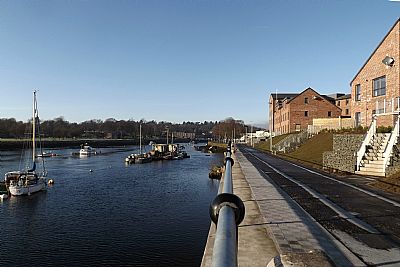 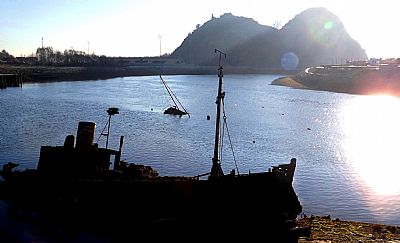 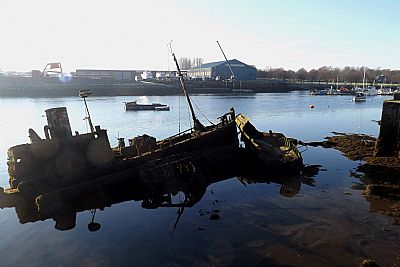 Ship and boat wrecks are always fascinating, but when do they cease being hisrorical objects and merely excessive litter?