We talk about West Dunbartonshire as a region, a council authority area, even a county. But over the years this has altered. It is worth contemplating this when we look at the features within what we now know under this title.

THE LENNOX : A look at Wiki tells us :

The Lennox (Scottish Gaelic: Leamhnachd, pronounced [ˈʎãũnəxk]) is a region of Scotland centred on The Vale of Leven, including its great loch: Loch Lomond.

The Gaelic name of the river is Leamhn, meaning the smooth stream, which anglicises to Leven (as Gaelic mh is spirantised). The surrounding area is the field of the smooth stream - Leamhnachd in Gaelic; this was originally anglicised as Levenauchen / Levenachs, then softened into Levenax / Lennax, and eventually the area was known simply as Lennox.

Lennox was not one of the so-called seven ancient Provinces of Scotland, but formed as a province in the Middle Ages. The district embraced the whole of the ancient sheriffdom of Dumbarton: the parishes of Rosneath, Arrochar, Row, Luss, Cardross, Bonhill, Dumbarton, Kilmaronock, New Kilpatrick, Old Kilpatrick, Baldernock, Buchanan, Drymen, Killearn, Balfron, Fintry, and Strathblane, with Campsie and Kilsyth, being all within the bounds ruled over by the Earls of Lennox.

This is very significant when you visit Dumbarton Castle on the confluence of the River Leven with the Clyde.

The area was subsequently altered and formalised into Dunbartonshire and again we turn to Wiki :

Dunbartonshire (Scottish Gaelic: Siorrachd Dhùn Breatann[1]) or the County of Dumbarton is a historic county, lieutenancy area and registration county in the west central Lowlands of Scotland lying to the north of the River Clyde. Dunbartonshire borders Perthshire to the north, Stirlingshire to the east, Lanarkshire and Renfrewshire to the south, and Argyllshire to the west. The boundaries with Lanarkshire and Stirlingshire are split in two owing to the existence of an exclave around Cumbernauld (see below).

Prior to 1975, the county was also used for local government with its own county council, its administrative centre being at the town of Dumbarton. Under the 1973 Local Government (Scotland) Act, the county council was abolished and administration was transferred to the newly formed Strathclyde council region and Dunbarton District Council. On further reorganisation of local government in 1996, two new unitary council areas of East Dunbartonshire and West Dunbartonshire were created.

A "shire" is a historic subdivision of Scotland established in the Middle Ages for judicial purposes; a territory over which a sheriff had jurisdiction. "Dumbarton" comes from Scottish Gaelic ie Dùn Breatann or Dùn Breatainn meaning '"fort of the Britons". There are many other hills once identified as forts or defensive positions around Scotland that are known as "duns", usually with that word as a prefix. Common use or pronunciation and spelling wavered in the early years of formal adminsitration between "dun-" and "dum", but they mean the same thing and we have inherited the latter in the name. 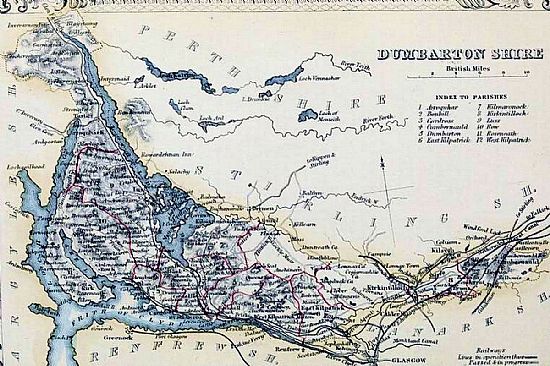 So West Dunbartonshire as we know it today is a fairly recent designation : from 1996. generally for the purposes of this website, the local authority boundaries define it, but for some features that we discuss, these have been stretched a little into the older broader areas. Features such as the yairs at Ardoch for example, would have provided a source of fresh fish for Dumbarton so are entwined in the town's story.

This link clarifies the boundaries of West Dunbartonshire.

This is perhaps Scotland's greatest national asset. A vast expanse of water overlooked by the regal Ben Lomond. Nature and natural beauty recognises no political or local authority boundaries. When this became a National Park, it was instituted under the Loch Lomond & The Trossachs National Park Authority. That has its own governance such as its Planning Department, yet overlaps parts of West Dunbartonshire as well as Argyll and Bute and Stirling. You will therefore find the island of Inchmurrin, for instance within both West Dunbartonshire and the Loch Lomond & The Trossachs National Park with different yet complementary roles.