ACCESS : There are two access points, neither obvious. One is from the old gateway off Carman Road. The other is from a nondescript point at the layby a little way up the bumpy rural section of Barrs Road.  The old driveway remains as a walkway and the paths generally easy to walk on. But be aware that some areas are very steep and muddy or overgrown.

Kilmahew Estate with all its features is today within Argyll and Bute, but was historically within Dumbartonshire County and so retains a valid place within the West Dunbartonshire of today.

To appreciate these grounds, it is essential to envisage it before the modern seminary was built. KILMAHEW HOUSE sat in a lordly position surrounded by a landscape of plants and trees, many of which were inported, and a burn running down the centre.

The estate's main gates on Carman Road, a little outside of the town, no longer exist and are palisaded. The gate lodge here was demolished some years ago after it was vandalised. (All you see now is a pile of rubble). But you can still get past the gate and onto the long approach driveway. It passes over bridges spanning the Kilmahew Burn.

When the seminary was built the gardens were utilised. In fact the original house remained as part of the complex, but with the end of the seminary's use all of the premises including the grounds fell into severe disrepair.

A path towards the Barrs Road entrance brings you to the ruins of KILMAHEW CASTLE (discussed separately). Near that is a duck pond. It has an island with a footbridge. A path up to this point has a tunnel of rhododendron.

The Kilmahew Burn itself is crossed by some footbridges. These are no longer usable, but look strangely picturesque. A second burn, the Wallacetown Burn, joins it from the north east down to the southern part of the estate.

To the south of the estate, but east of the Kilmahew Burn, are the remains of a walled garden and extensive garden buildings including that of a long greenhouse. This area is extremely overgrown and difficult to find in spite of its size and approach tracks.

Other areas of the estate have elegant mature trees. The new owners, KILMAHEW EDUCATION TRUST, have begun clearing of undergrowth and developing and off road cycle track on the slopes above the Walacetown Burn. 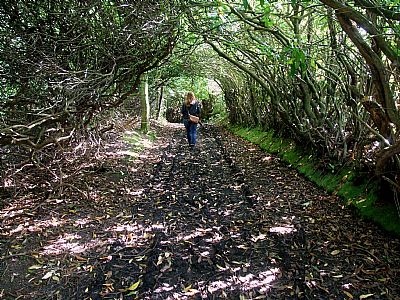 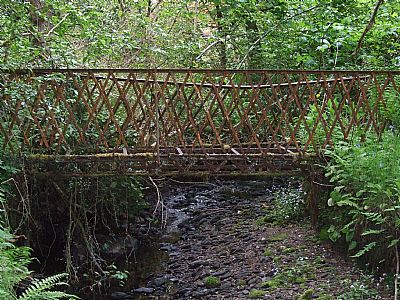 One of the footbridges. 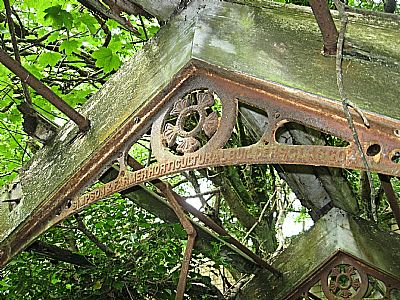 A cast iron apex truss on the greenhouse with a glazing panel opening mechanism beyond it.

We are, of course, seeing the estate large as it is now, a mere segment of what it was. A sales brochure of 1919 (Canmore Catalogue Number SC 2148816 ) describes it as including ... Kilmahew House and Castle, Lodges, Farm and cottages together with Cairniedrouth Farm, Asker Farm, Kirkton Farm, Cardross Park, High and Low Milndovan Farms, Auchenfroe House, Golf Club House, Wallaceton Farm, Walton Farm, Craigend Farm and Auchensail Farm. This explains how surrounding histories tie together, for instance the experimental flights by Percy Pilcher on the slopes of Wallacetown Farm and his workshop at Low Auchensail on Auchensail Farm.

For more on the extraordinary auction of this extraordinary estate in 1919, have a look at the catalogue on Canmore. The various elements of the main part of the estate and various ancillary properties, some surprising, are covered : https://canmore.org.uk/collection/2148818