ACCESS : The site is an easy walk up from the road. Path uneven.

Three large trees stand stubborn, but dignified on Carman Muir above the reservoir, a scene otherwise simply of grass and heather and a bit of gorse. How did they get here? Why are they here? Today they have a subdued yet touching collection of small family plaques of passed loved ones and perhaps some flowers or other items. It is indeed a vantage point from which to enjoy the hills and Vale below.

But at one time this was a bustling scene. Noisy with revelry, shouts to control livestock and bidding, perhaps even some live music.

This was the location of the cattle fair. Some refer to it as the horse fair as indeed these were marketed here too. Or perhaps simply the Carman Fair.

Livestock was driven up onto the muir along the demarcated route from Renton. This was roughly where the 100 Steps were and is described under that section. Or driven up from the direction of the Gareloch to the west. You can still clearly make out the route up from Renton. That from the west is less clear.

They headed to an area right next to a farm house. That house, or cottage, took on roles of stock market management and pub. It was known as Carman House or Carman Cottage. (Confusingly this name was also attached to two other nearby cottages - the east and north of it).

Unless you look extremely carefully, there is nothing left to identify that building and hint at its earlier role. The trees stand as mute witness.

But alongside that is an area identified by its even greener complexion and defined by an earth embankment. It is roughly triangular, but with a round end to the west. Seen from above, such as from Carman Hill, this brighter green is rather conspicuous. Although bracken is now encroaching on what was rich grass, it is still clearly demarcated. And the reason? This was the area where the livestock were penned. The best source of fertiliser - manure - under their feet! Even so many years later, it is still discernible.

The Vale of Leven Project tells us : ...in the 1820's, the Renton Cattle Fair was started on Carman Hill. The site of the Fair was on land just to the south west of the dam, which is still recognisable as the Fair site with drove roads leading to it from all directions on the hillside.

This Cattle Fair, held each August, was originally started in Dumbarton, but moved from there to a site close to Pappert on Dumbarton Muir, before settling into its final location on Carman in the late 1820's. It lasted until about 1896, and in its heyday was one of the most important cattle fairs in Scotland, with announcements about it even appearing in the London papers.

The days of the fair, in August each year, were a local holiday with large crowds attending - after the railway came to Renton, special trains were laid on to bring crowds from Clydeside. Drink flowed freely - the shepherd's cottage, which was adjacent to the site, acted as a pub while the fair was on - and melees frequently ensued - as indeed they did at the Balloch Horse Fair.

A view from Carman Hill. To the right of the reservoir and its small wood you can pick out the 3 large trees where the house was and the green grass where the livestock was kept. 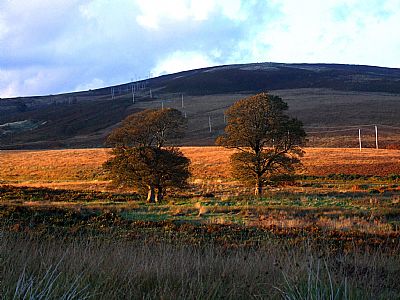 The 3 large trees with Carman Hill in the distance. 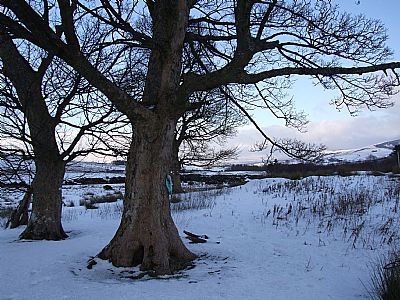 The large trees in snow. 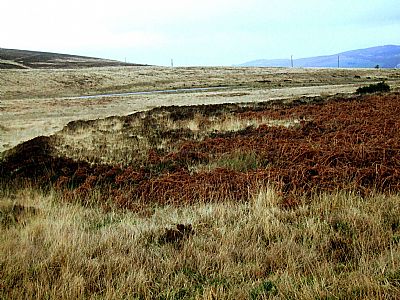 Between the trees (the house site) and the road is where the livestock were kept. This is part of the encircling embankment. It probably had some sort of light palisading around it too.