Hopefully someone reading this will be able to provide more information. If you know anything about the following two people, please use the YOUR COMMENTS section to leave a message. Your details will be passed on to the researchers, but not made public.

This story is that of James Denny from Dumbarton. It has been highlighted by Richard van der Velde from the Netherlands who has been researching war victims there for over 12 years. This particular story is all the more pertinent to him as a Stirling bomber crashed on October 15, 1942 with 7 crew members, close to where he lives. The crew, including James, were all killed.

James's name appears on the war memorial in Levengrove Park overlooking the Clyde in Dumbarton. One of many from two World Wars.

The name of “Denny” stands out for anyone with Dumbarton links. The Dennys were prominent in the shipbuilding industry, almost on this spot, and in civic life. An earlier “James Denny” lived nearby in Levenford House, but our James here appears to have been from another family, although they were possibly connected.

James Denny was the son of James and Margaret Denny and born in 1911. We presume that he was married and know that he had a son called Jim.

The sound of a faltering plane engine in the middle of the night ..... For many elders, this will evoke memories of the time when it posed the threat of sudden violence, but also the hope that the Allies would not give up. For the seven-strong crew of a crippled Stirling bomber circling over Ingen at around 11.30am on October 15, 1942, it was anything but hopeful. The war would come to a dramatic end for them that night. [RvdV].

Early in the evening on October 15, 1942, the Stirling bomber, together with a group of other aircraft, took off from Lakenheath Airport, northeast of London, for an attack on Cologne. It had a flight range of around 2,000 miles. The armament consisted of eight Browning machine guns, two in the nose, two in the dome at the top and four at the rear.

Having completed its objective, the plane was shot down on the way back near Ingen in the Betuwe by a German night fighter at 11.33 pm.

You can find out a great deal more about the events on Richard van der Velde's website. (See link below. Use Google Translate for an English version). He also covers more about the squadron and other events in great detail. 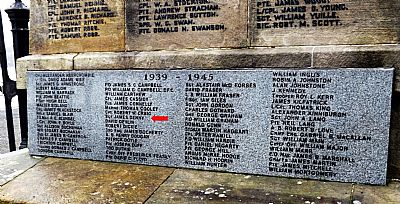 This person is being researched by Kirsten Moon. She has managed to contact the families of three of the seven crew of the stricken bomber. One of those who she wishes to follow up is Alistair Wingate Scott who is from Scotland with the trail leading to Dumbarton.

Alistair, known in the crew as “Al” was a member of the crew of Lancaster PA190 UM-G2. The plane crashed, probably over the North Sea near the Dutch coast, on 3 April 1945 with the loss of all lives. The plane was from 626 squadron flying from RAF Wickenby as part of an attack on the V2 rocket production site, which employed slave labour, at Nordhausen, Germany. [KM].

Kirsten has been researching the crew and events because one of them, Joseph Hallowell, was her uncle. She is now endeavouring to follow up all the others. An appeal made by the International Bomber Command Centre at Lincoln for individuals, historical groups and societies to research local casualties spurred her on. They encourage anyone to send in as much information as they can about people involved so that it can be added to their Losses Database (their email for this being –losses@internationalbcc.co.uk).

Alistair Wingate Scott was born in 1922 in Dumbarton. His name appears on a memorial at Glasgow Academy. He does not appear to have married though the crew (as above) attended his sister’s wedding in Scotland, in late March 1945, days before they were all killed. This is most likely to be the wedding of Ailsa Gertrude Scott to Donald McDonald Thomson in Blythswood, most likely that in Glasgow. (see THE SCOTTISH MILITARY RESEARCH GROUP - Commemorations Project link below).

Alistair’s mother was Jane Gertrude Wingate born in Skegness in 1888 the daughter of Joseph (of Skegness) and Jane Wingate (from Hartlepool Durham). In 1891 Joseph is listed as a “donkey proprietor” maybe on Skegness beach, and by 1901 he is listed as a travelling showman. Jane married Alexander Scott of Dumbarton, in Dumbarton, in 1917. It was possibly a WW1 romance.

Alexander’s WW1 record hasn't been found. To confuse issues, there are a lot of Alexander Scotts (with or without M/Martin as a middle name). There doesn’t seem to be a Jane Wingate in the WW1 Red Cross records but there were a lot of other ways she could have been helping.

Alistair’s father is Alexander Martin Wingate. He appears to have been born in 1888 in Dumbarton, a son of Walter Scott, a Wine and Spirit Dealer, and his wife Alice, nee Martin of Kirkcudbrightshire. Therefore the “Martin” seems to have been his mother’s name.

There is a probate for Alexander in 1959 in Dumbarton. That record has a “linked person” John Wilson Crawford, who may be the Scottish equivalent of an executor.

It seems likely, but not certain, that there were at least the following siblings. This research is based on surname, and births in Dumbarton 1917-1932, maiden name of mother on death records, marriage records, and mother’s Christian name.

Confusingly, there were 18 people called Scott born in Dumbarton between 1917 and 1932 (when Jane Gertrude would be 45). It includes the four in the table above. If the above are the only ones it seems only Ailsa married.

We can’t be sure whether any of the others are siblings. There don’t seem to be any male “Scott” with mother’s maiden name “Wingate” who have died in Scotland, but of course they could have gone elsewhere and not be traceable without the “Wingate” shown in the Scottish certificates. In going through the remaining female Scotts born in Dumbarton in the right time frame one can see marriages for all and discount two who, on death records, show their mother was a Henderson. Another, Mary Rothnie Scott, is unlikely as she was born in 1919 and another Jessie Blythe Scott, less likely as born in 1920 and a third Elizabeth Olive Scott, was born in 1928. That leaves Mary Gibby Bake Scott born in 1924 as a possible sibling. She married Thomas Esdale in 1941.

On the Jane Gertrude Wingate side of the family, it seems the Wingates moved to Dumbarton.

A distant relative (by marriage) has on his family tree, Jane’s father Joseph father dying in Dumbarton in 1930 and her siblings dying there.  Charles Henry in 1965 and Olive in 1968. I understand Charles married and had five children, but I haven’t been able to contact them.

If we have the right father for Alistair, then Alexander Martin Scott seems to have had at least four siblings. James Ferguson?, born in about 1886 (later apprentice boat builder), Ailsa born 1893, William in 1895 and Walter born about 1898 (a Walter born in 1891 probably died in 1894 in Renton); all born in Dumbarton. The families address in 1891 was Levenford Terrace, Cardross, Dumbarton and in 1901 Ivy Bank, Cardross Road, Cardross, Renton, Dunbartonshire.

[Note that “Cardross”, or Parish of Cardross, was still considered to include that area from the Leven westwards through that part of Dumbarton through and Renton as this time. Levenford Terrace adjoins Veir Terrace next to Levengrove Park. There is a Cardross Road leading from Dumbarton towards Cardross as well as one from Renton. Ivy Bank is not known].

Picture credit as below.