ACCESS : The remaining section of the facility is unused. Closed to the public.

Imagine Clydebank during its industrial heyday. It was an internationally important shipbuilding centre as well as famously producing Singer sewing machines and with those came all the various ancillary products. There were thousands of workers perpetually grubby from their labours. Homes, usually in tenements, rarely had their own plumbed baths, let alone indoor toilets. So if you wanted a bath (if you could bother after many hours of hard labour and just wanting your tea and a nap before the next shift), you washed in a basin on the kitchen floor. Swimming in the Clyde was an option although the weather and increasing pollution hindered this. Public baths sprung up in Victorian cities in response to similar conditions across the country. Many were quite substantial and Bruce Street Baths were amongst them. Some such public baths were grand. Bruce Street Baths are not one of the more ornate, but were nevertheless very impressive. Many such baths have been lost or are at the point of being lost, yet through great efforts of local communities, some, usually the grander ones, have been saved.

Today if you visit the adjoining Clydebank Town Hall you will come to a pleasant naturally lit art gallery, the Garden Gallery. While it is pleasant and faces out at a small enclosed garden, there is something odd about the enclosing wall. This is because that outer wall is the remnant of the slipper baths. From Bruce Street you may guess, correctly, that it was higher. Alongside it is the gabled end of a larger building and that is of the completely intact main baths. The two were in fact parts of a combined facility. The gap that now forms the garden also had a narrow modern section that was part of the access stair between floors and between the police station and basement level cells. We begin to realise that all this was once part of a larger complex, one that covered almost the whole block.

This civic building complex comprised the town hall, council chambers, offices, a main hall and some secondary halls, the police station, cells and the Bruce Street Baths. And therein lay an issue when seeking to renovate the complex. Listed Building criteria clearly define that anything within the curtilage of a property is included in a listing. However West Dunbartonshire Council wished to demolish the baths. To them it was a separate property and not listed. The listing text made no specific mention of the baths. Several groups, including the Strathclyde Group of the Architectural Heritage Society for Scotland and the soon to be member of parliament, protested the impending loss.

The Bruce Street Baths are therefore a very significant part of West Dunbartonshire's cultural and architectural heritage. Hopefully a long-term and sustainable use can be found. What follows is a selection of photos before the slipper baths were demolished to make room for the pleasant garden now part of the gallery within the Clydebank Town Hall. The main bath / pool remains largely intact awaiting some resolution for its future. 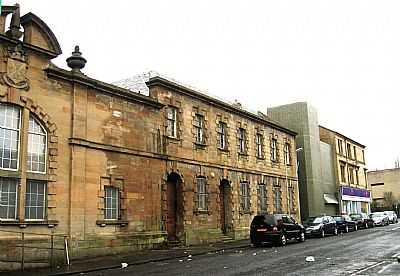 The main bath is to the left. The slipper baths are to the right. Some of that facade was retained to enclose the new garden. The green tiled modern infill was the stairs to the courts. 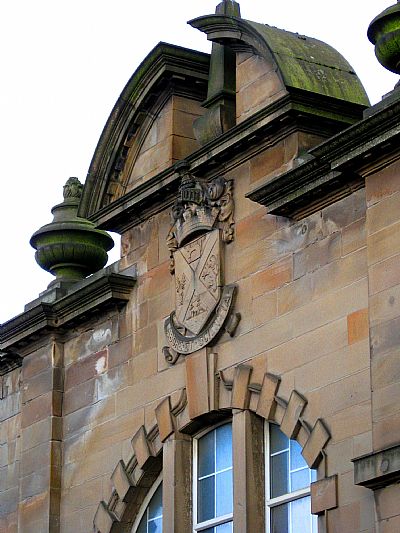 The main pool facade. Note the sewing machine in the crest. 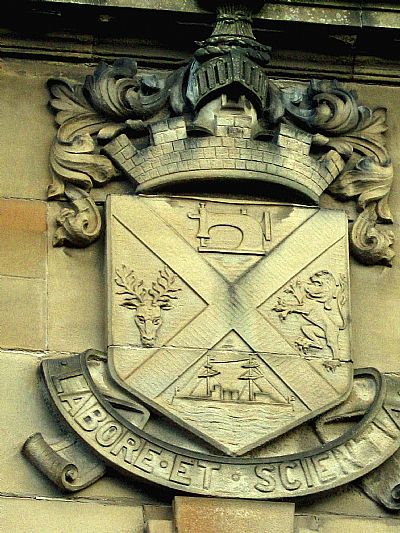 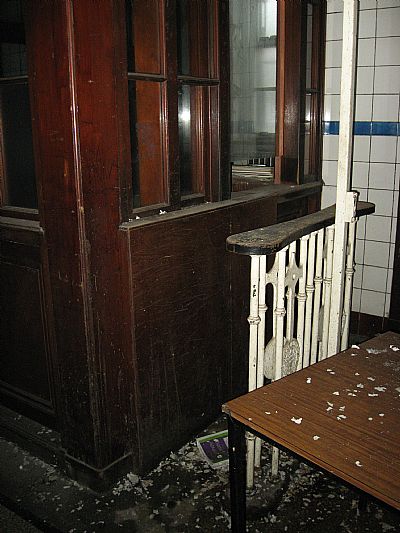 An entrance stile and ticket office. 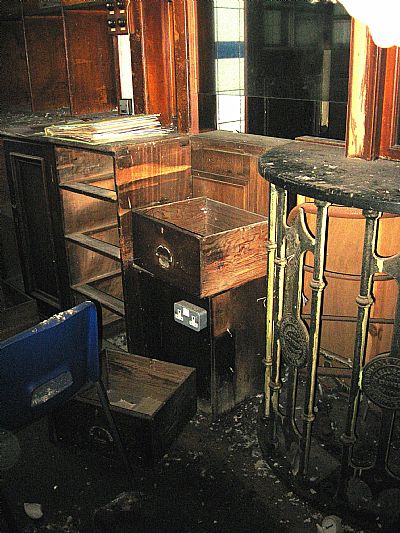 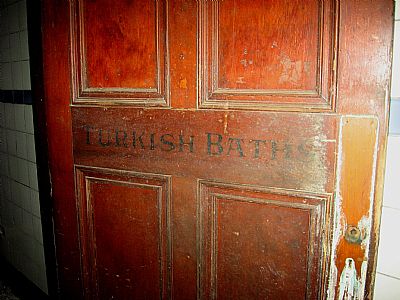 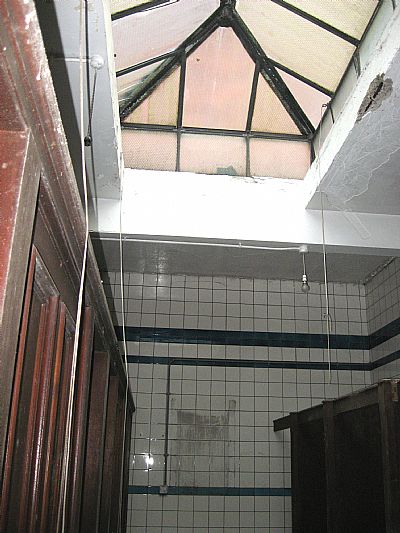 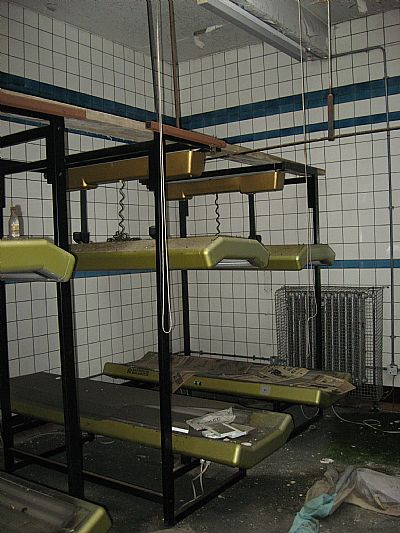 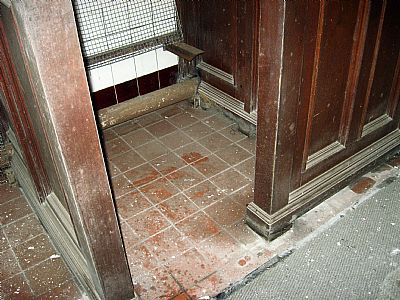 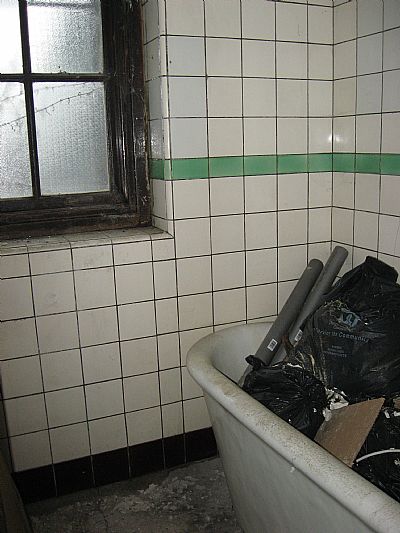 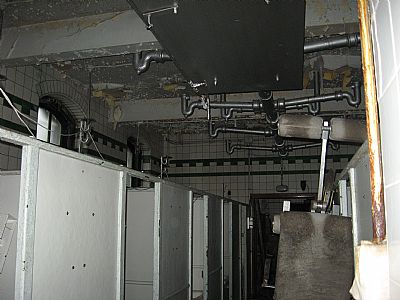 The preceding photos are a mix of services.

Below are some of the main pool. 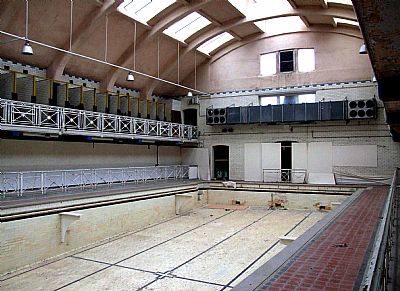 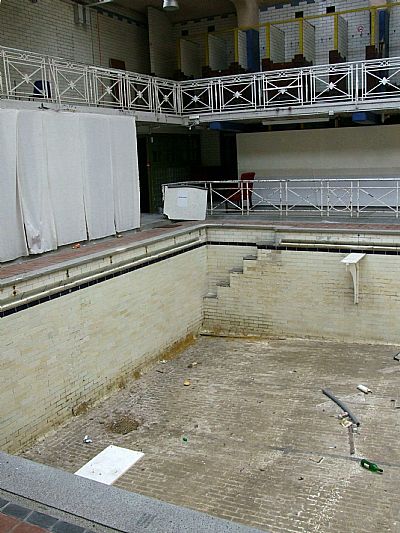 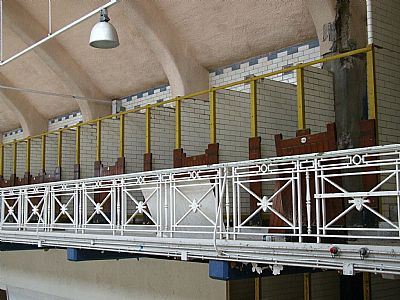 IMGUR website : http://imgur.com/a/qi3kq#0 This includes a great deal of the now lost section including the adjoining cells, saunas and bad language scrawled on the walls.