ACCESS : This is a road bridge suitable for all vehicles, cyclists and pedestrians.
Listed B.

Dumbarton grew from a village to a small town at the confluence of the mighty Clyde and the fast flowing Leven. The area immediately around Dumbarton Rock and its castle was generally marshy, even prone to flooding. While that was turned to a positive use when shipbuilding began, it also meant that the town was a little further away from its Castle than many a settlement of similar origins.

But develop it did. The town had close links not only with Glasgow and the Parish of Cardross right across on the opposite bank as well as the districts of Argyll . Naturally a bridge was a very early proposition instead of dependence on ferries. A little upstream the Leven spread itself out into a very large marshy area. That was infilled a long time ago, now knows as the Meadow Industrial Estate. All this influenced the nature and location of Dumbarton Bridge. It is situated on the sweep of the main road, now Bridge Street as it passed the edge of the original area of Dumbarton at a point that also has a relatively sound founding in the river bed.

So the particular place that we find the bridge is not random, but a combination of history, geography and practical considerations. And there were other factors that influenced the timing of its construction and form.

The listing text tells us that stones were already being quarried for this purpose when designs were being drawn up in 1683, although the earliest known proper design is from a year later. Then work was delayed. It was only restarted when it appeared that it might be beaten by another bridge further upstream. Remember that at that time, Dumbarton was still little more than a village and other settlements upstream could be a challenge to it if they got a bridge first and so diverted passing trade from it.

It was only natural that local stone was used. Shortly after building was completed, one pier failed, bringing down 2 arches. Repairs needed to be done and were completed in 1768.

It was to prove popular and something had to be done to enable it to cope with increasing traffic. An advert appeared in the NORTH BRITISH ADVERTISER 9.9.1843 inviting tenders for " .... widening the roadway and erecting footpaths on the bridge in wrought and cast iron ......" [HES]. Illustrations of the bridge were produced widely, but there is no indication that the widening actually got done at that time.

The listing text tells us that John Brown of Dumbarton was the Architect and that it was built in 1765. It was widened with iron cantilevers in 1884 to the designs of W R Copeland of Glasgow, engineer. The ironwork was repaired and concrete balustrade added in 1933-4 under Mr Jeffrey of Dumbarton, engineer.

What we see today remains a marvelous sight yet has been modified on several occasions to increasing needs. Even fairly recently it was again widened to facilitate today's traffic. The concrete ballustrading and the lights are contemporary. 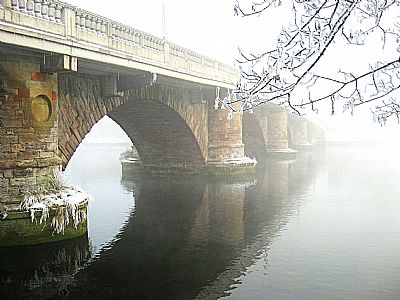 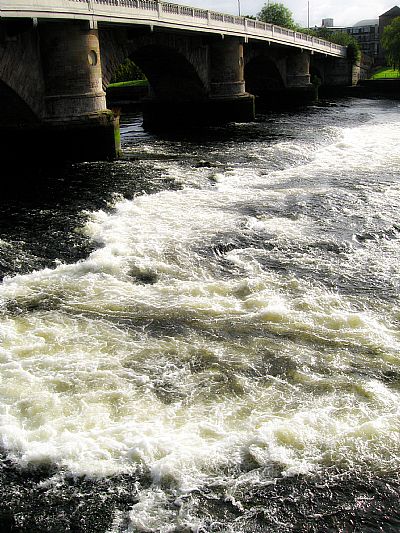 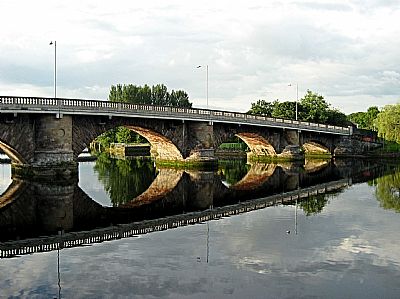 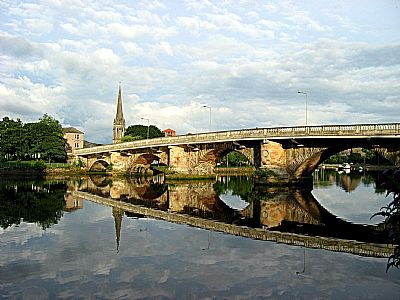