ACCESS : Easy and pleasant access to the extenive grounds. You can approach the castle, but it is not open to the public.

Parking : Near the south gate on Balloch Road OR down a road off Balloch Road (turn at St Kessogs Church) OR within the grounds near the castle approached down a driveway off Mollanbowie Road.

Pedestrian access : Walkers can use the same access points as for parking and also enter down a path alongside the Balloch House Hotel next to the bridge.

This is more grand house than castle, but it is imbued with a castle aura and grandly overlooks the lower reaches of Loch Lomond. The present building was built in 1808 for John Buchanan of Ardoch. It was designed by Robert Lugar, who also designed Tullichewan Castle. John Buchanan was one of the original partners in the Glasgow Ship Bank and he signed all the bank notes at the castle.

Today it sits a liitle forlorn and empty. Occasional work on it has given it the will to survive, but it desperately needs a new purpose in life, besides that of scenic backdrop.

The grounds are well worth a visit. They provide great walks amongst tall trees across lawns and down to the Loch. There is a well maintained and pretty walled garden. At the shore there is a slipway, sometimes used for boating events, and a small kiosk.

Two gate lodges remain : one at the main entrance off Balloch Road, and one on the east side off Mollanbowie Road.

Something that is historically important, but which is passed daily by many walkers completely unaware of it, is the site of the original castle down near the shore. This was the previous or "old" Balloch Castle. Although little can be discerned now, you can make out the mound and the form of a moat.

The old Balloch Castle dates from 1238 and was the historic home of the Earls of Lennox who lived there during the medieval period.  The Lennox family had been given the land and titles in 1072 by Malcolm III, son of Duncan who was murdered by MacBeth. The Earls of Lennox did not consider Balloch Castle to be safe enough from attack, so around 1390 they abandoned it and moved to the security of a new castle on the island of Inchmurrin. [WDC].

Extract from "Levinia Vicecomitatus. The Province of Lennox, called the Shyre of Dun-Britton", by Timothy Pont, c1560-1614. The castle is labelled here as "Bellach" simply with a symbol of an important building. That island is the one next to Balloch House Hotel. A small burn that runs close by is easily recognisable when you visit.

In this OS map of 1860 you can see the site of the old castle marked by a motte ie a mound. It looks more extensive on the map than today. Some earth and stonework have perhaps been removed for reuse elsewhere. Any timber structure would have naturally disappeared. The label also notes a moat although that is little more than where it reaches onto the river bank. More a place to pull up boats than defensive, but the river starts to flow swiftly at this point as it leaves the Loch so this may have had some strategic benefit. The later walled garden can be seen to the right.

In this map by Pont you can see Loch Lomond where it enters the Leven. The estate is labelled Balloch. Two large buildings are shown. The original castle would have been the one nearer the river. The other one is unknown, perhaps the stables. strangely near where the later one, not then constructed, still is.

The old castle continued in the hands of the Darnley branch of the House of Lennox until 1652 when James, fourth Duke of Lennox, sold Balloch Castle to Sir John Colquhoun of Luss.

At the beginning of the nineteenth century John Buchanan of Ardoch acquired the Castle and Estate.  He used stone from the walls of the ruined castle to build a castellated mansion nearby. This mansion is now commonly known as Balloch Castle. [WDC].

Joseph Irving writing in 1879, about the district and who owned what, notes how the Earls of Lennox had made good use of their various properties in this area including the lands of Luss. Amongst their properties was the original Balloch Castle. This lifestyle was disrupted James 1.

On the subdivision of the earldom in the fifteenth century, the stronghold of Balloch was retained in the hands of the Darnley family, who, on more than one occasion, entertained their sovereign within its walls. It seems to have been gradually abandoned, however in favour of Inchmurren, which as early as 1511, is described as the chief messuage of the earldom. No portion of the original castle at Balloch remains, but it is known to have been situated to the edge of Lochlomond; the fosse, which could thus be readily filled with water as occasion required, still exists, and, encircles the knoll on which the castle stood. On making a slight excavation in that quarter some years since, certain pieces of timber, firmly bound together, were found in a position corresponding with that where the drawbridge may supposed to have sthgyyu ood. [Irving].

He goes on to mention the new castle that overlooks the site of the old one.

In the 19th century, the land was acquired by John Buchanan of Ardoch, who erected a castellated mansion on the estate, from a design by John Lugar.In 1830, it passed into the hands of Gibson Stott, Esq., who greatly improved and adorned the grounds. [Irving]. 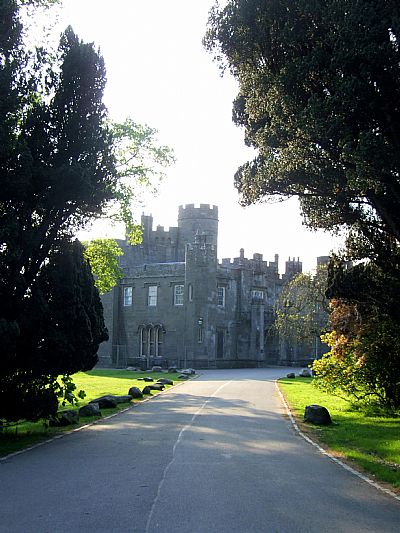 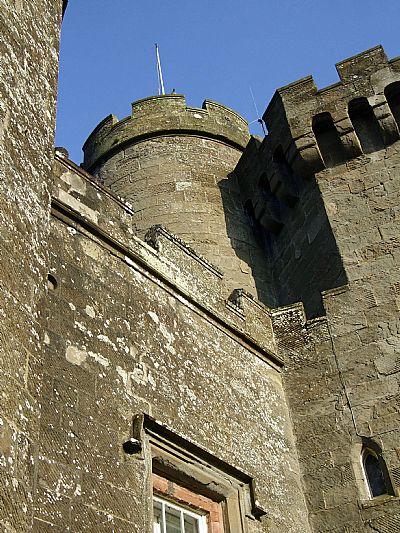 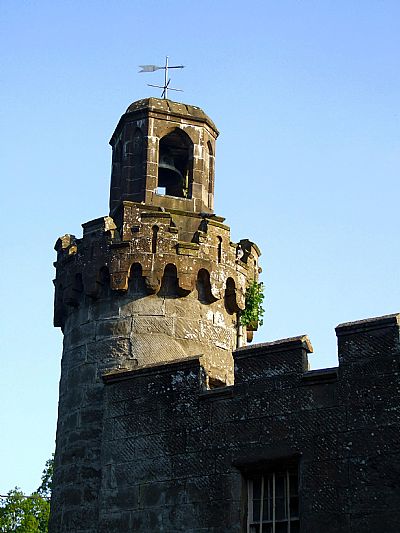 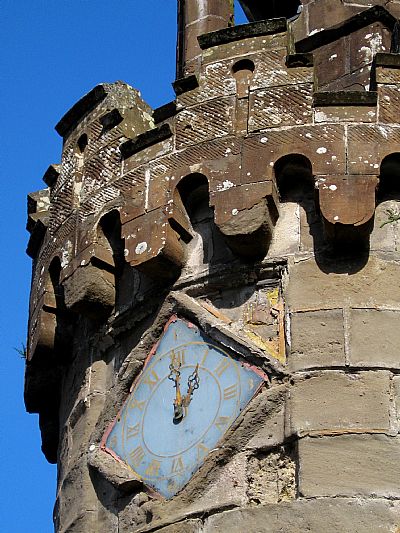 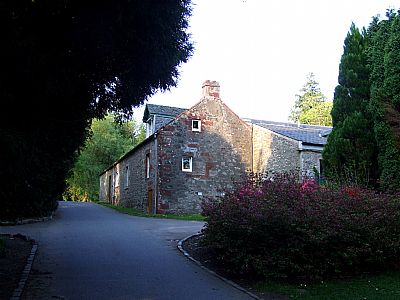 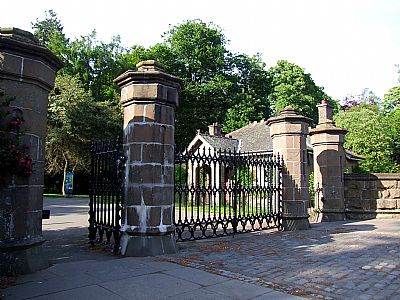 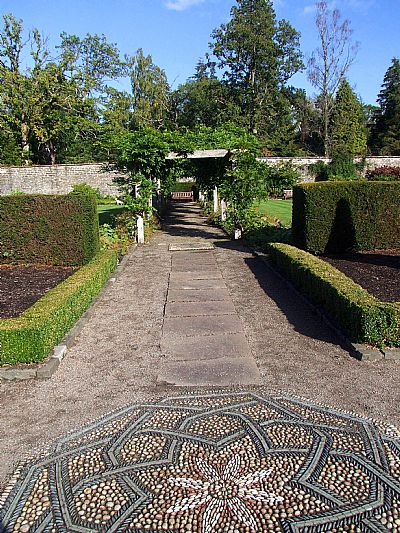 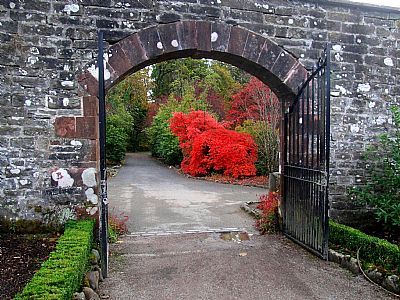 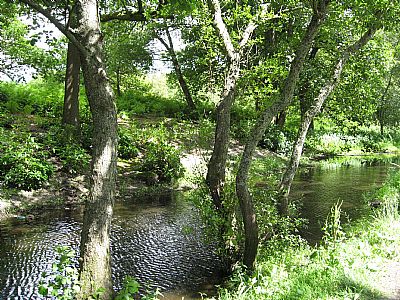 The mound is the approximate location of the original castle.

Its moat was probably here, but subsequent disturbance to the land including the passing path have affected it.