This is one of two quarries on Carman Muir although there are also several smaller excavations for stone spread across it too. Another one is located in the now overgrown area within the woods below the reservoir wall and was used for stone for the wall. Carman Quarry may have been used for that too, but would have also provided material for the road across the muir - Cardross Road from Renton / Carman Road from Cardross. The smaller excavations nearby include one for cornstone for lime, bases for electricity pylons and perhaps farmhouse buildings. While some material may have gone to building the dry stane dykes, they were mainly built from loose rocks found across the muir - and very likely pilfered from the now almost invisible Carman Hillfort.

An obvious place to start a quarry is from a rock outcrop. In this case it was a small hill right below Carman Hill itself and the parent hill of Mount Mallow.

The extent of the quarrying is still evident. There is a great deal of large rocks left in piles and a remant of the original hill to one side. Some of the disturbed large rocks that were rejected as building material have the very clear imprints of mud cracks. They appear to have been formed under the small hill such as when an expanse of water such as a pond dries out and leaves cracked mud. If this is then covered, this can preserve these patterns for a very long time afterwards.

We know that there was a small hill here before quarrying, but was it over the pond or right next to it? At this point we need to consider old maps. Such old maps of about 1860 show this as "Faerie Knowe", the hill of the faeries. And later maps show the quarry slowly eating away at the knowe.

Was this somewhere special and imbued with mystic qualities? Its proximity to the Carman Hillfort above suggests a link. We may never know the full significance of the knowe. (This is discussed more fully in the article entitled LOCAL MYSTERIES under ARTICLES at the end of this website).

Carman Muir is today a great place for walks. It is relatively undisturbed. But in the not so distant past there were plans to reopen this quarry. Imagine the road across this muir again full of large trucks and the quietness disturbed by blasts and rock crushing. As a designated natural open area it now has a degree of protection. 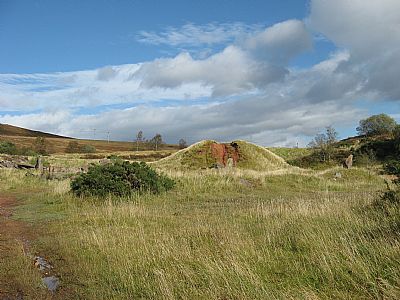 What you see today. Don't get confused by that mound of spoil earth. This whole area was once a knowe; a small hill. 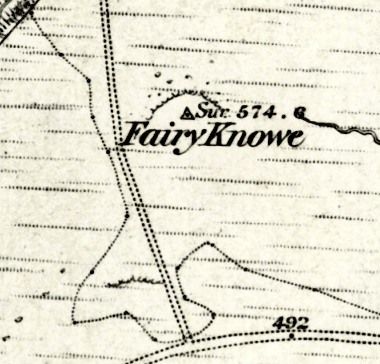 This OS map of 1860 distinctly shows the small hill labelled as Faerie Knowe. It appears to have a definite edge on the northern side. 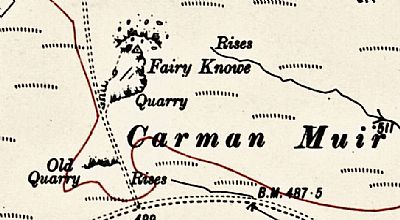 By 1914 there is some quarrying near the intersection of through road and branch track as well as substantial quarrying of the Faerie Knowe. 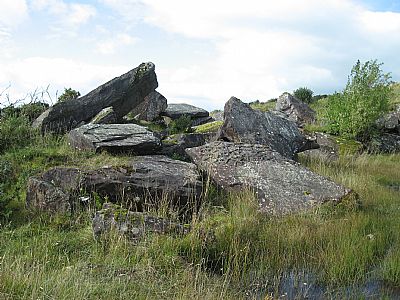 The quarrying disturbed the bedrock in large broken and upturned sections and sought out the more usable rock above and to the sides. 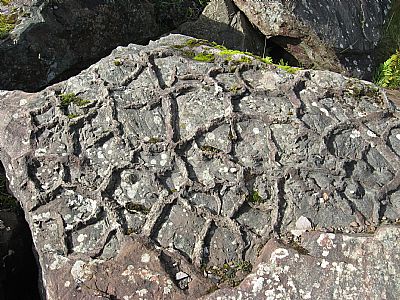 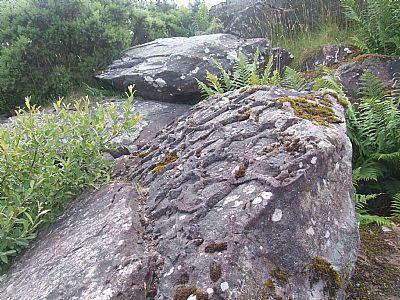 The strange thing is that this disturbed rock from the lower surface of the quarry appears to have imprints of cracked mud, a dried pond. Now how did that get to be at that layer? 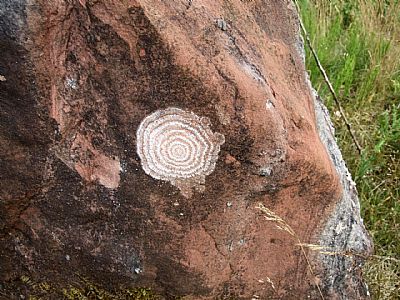 This is a lichen found on a rock at the Faerie Knowe. Similar ones have been seen on rocks on the hill above. Is this the inspiration for the concentric rings engraved on rocks elsewhere, almost always with cup holes? Did the lichen have any use such as a hallucinogenic drug used in rituals? Also see COCHNO STONES index.asp?pageid=715987