RIVER LEVEN, from its sources at Loch Lomond to Dumbarton.

The River Leven as it flows through Dumbarton past Dumbarton Rock to the Clyde is discussed separately under DUMBARTON HARBOUR.

ACCESS : Almost the whole length is accessible by cyclists and walkers along the tow path. Boating makes use of the lower and upper reaches. It is dangerous for swimming.

This section discusses the Leven from :

The River Leven, or simply, the Leven, is the main artery of the Vale of Leven. It has sustained the people and the industries here for centuries. The primary industry, that of textile bleaching and printing, used to dominate this landscape and depending very directly on it. See TURKEY RED for more details. The Leven River Leven Heritage Trail. (See link below).

It is very fast flowing, a characteristic that is both a danger and a benefit. It can be difficult to navigate, but the flow keeps it very fresh. The water quality that once was a benefit to industry, is a great benefit to fish and other wildlife.

As it leaves the mighty Loch Lomond it passes through the now bustling marina at Balloch. That fast flow is no impediment to keen fishermen in their boats, rowers and, of course, Sweeney's Cruises that are an attraction to many tourists. All of these boats are based on the Leven, but head up onto Loch Lomond.

The Leven then flows swiftly down all the way through to Dumbarton, meeting the Clyde below Dumbarton Rock. Being an old river it has varied greatly in flow and today meanders exuberantly around the Vale before it reaches its outlet. That together with the hills and castle has inspired the West Dunbartonshire logo.

The river is usually swift, but picturesque and friendly. Author A. J. Cronin in his novel "Hatter's Castle" describes vividly how that can change dramatically. The story evolves around a ficticious, but thinly veiled town that reminds us of Dumbarton. The river though cannot be disguised.

The Leven is fed constantly by Loch Lomond and beyond that the distant mountains. These not only catch rainwater, but may retain it as snow and ice and release it quickly once it thaws. If that occurs simultaneously with very wet weather, the water level of the Leven raises dramatically. At the river's lower end there can be an added influence. There the river is tidal. Catchment from the Clyde may be added to the Leven and the levels within the basin can be even greater. If there happens to be concurrence with a solstice, the tides will push the water up even more. The Leven will burst its banks. This is sometimes severe and damaging, particularly downstream. For this reason a barrage has been built near Balloch. While this may reduce the impact downstream, many a business upstream or even on Loch Lomond may be left very unhappy.

The whole length of the River Leven can be walked or cycled on its west bank. This is thanks to a tow path created at the time when it was highly industrialised. That path is now formalised as a foot and cycle path. You can reach it at many places along its length. Having said that, it needs to be noted that it can spill its banks several times a year. That can mean wet wellies or soaked cyclists. Even if the water along the path is not deep, caution is required as the edge is not always clear. There is also a short section of path between the bridge of the A82 and Renton where you may need to share the path with cows.

Swift or not, it is still the home of the Loch Lomond Rowing Club. Its clubhouse is situated just above the barrage and rowers negotiate up between the many larger boats and swans until they reach Loch Lomond's calmer and extensive waters.

The fast flow of the river meant that it was not easy to cross by ferry and bridges were constructed very early in its history. Gordon Burns has researched and written about them in a book and this is now available online through the Vale of Leven Project website as Bridging the Leven. See the link below.

There is a great variety of birdlife on the river. Anglers frequent its banks, sometimes with great success. Fishing is by permit. The Loch Lomond Angling Improvement Association controls this while The Vale of Leven & District Angling Club, VOLDAC, looks after enthusiasts. See links below. Concerns that escaped farmed salmon from the Western Isles had somehow found themselves in the Leven was of great concern during 2020. There has been the occasional seal that has strayed up from the Firth of Clyde. In 2020 "The Only Way is Renton" FaceBook reported a beaver. Although appearing to prove that with a photo, it was never seen again.

At its lower reaches the River Leven changes character completely. Here it is within the town of Dumbarton and forms the harbour. And from there it converges with the Clyde. This section is well covered under DUMBARTON WATERFRONT PATH and DUMBARTON HARBOUR. 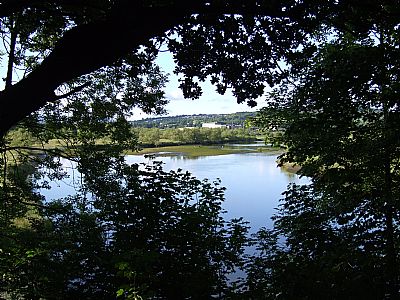 A view looking upstream from a point between the A82 bridge and the Glasgow Road bridge. ///secret.latest.oddly 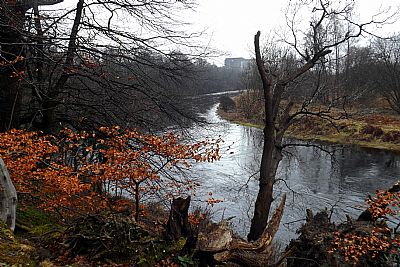 This view is from a high point below Chivas on the east riverbank looking downstream. Across the river is Dalquhurn Point. 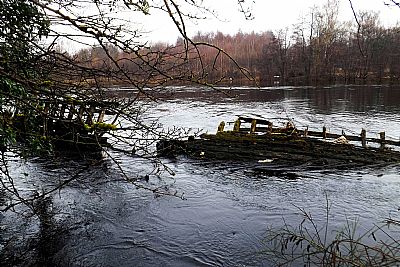 Just below and slightly downstream from the previous view is this very old timber boat wreck. Close by is another one, but of rivetted steel. 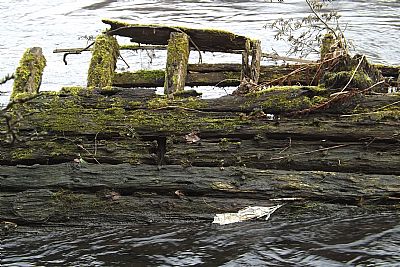 A close up of the aforementioned boat wreck. 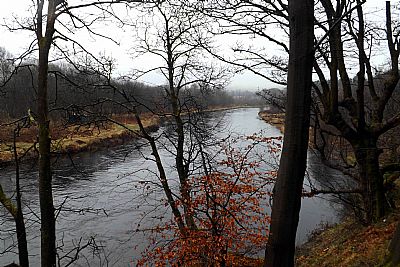 This is from the same point as the previous view, but looking upstream, again with Dalquhurn Point on the opposite bank. 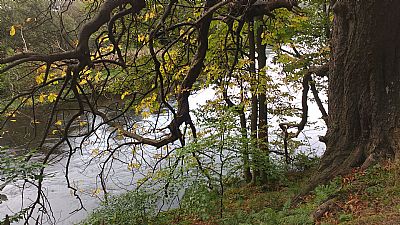 A look through large trees from the path near the Stratleven Industrial Estate.  ///leafing.deferring.insert 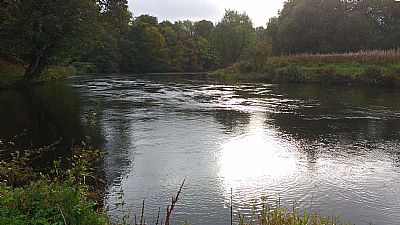 This is from almost the same point, but looking down stream.  ///exit.upholds.mural 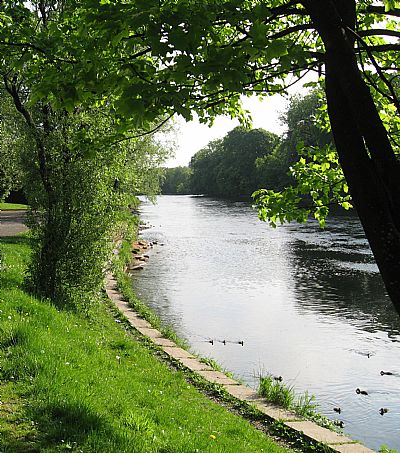 The river at the bottom of Alexander Street, Alexandria.   ///schooling.precluded.pricier 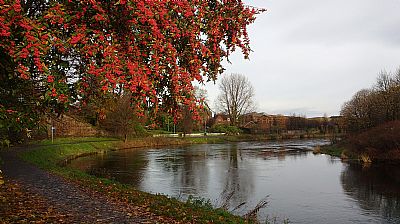 This is a view looking upstream towards where Alexandra Road meets the towpath. The red berries of a Rowantree set off the scene. ///tried.disposing.proclaims 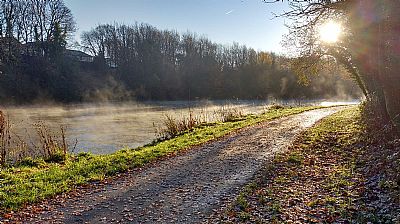 A crisp morning just downstream from the Stuckie Bridge with "steam" rising from a very cold river. ///whizzing.hypocrite.tycoons

A winter scene just below the barrage.   ///stuck.tragedy.loaning 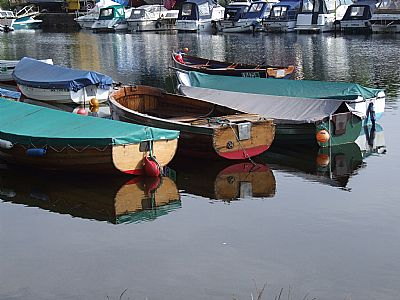 Once past the barrage you find moored boats of all sizes. 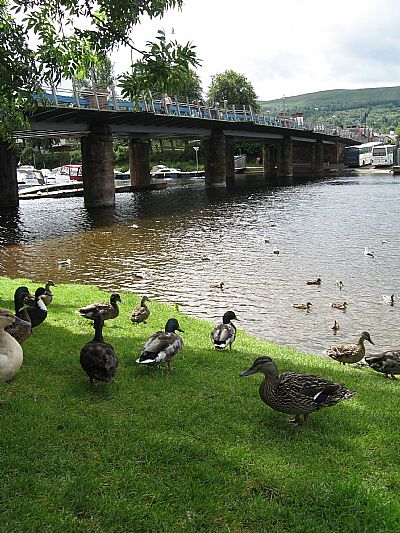 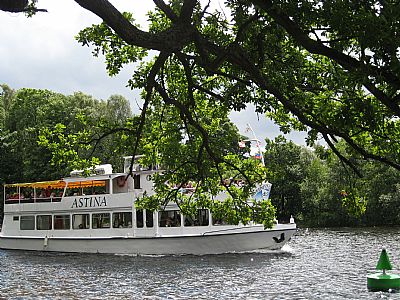 A cruise boat heads back from Loch Lomond.

To understand the River Leven we should see in its combined geographical - environmental - historical - engineered - recreational aspects. Elsewhere on this website you can find discussion on the Leven Barrage, Dumbarton Harbour and the Lost Lagoon. These have all altered the way the river works and how it flows. A few times a year heavy rains and high tides coincide. In times past much of that water would have been taken up by the mudflats where the shipyards once were towards the Castle and the mudflats and lagoon where the Broadmeadow Industrial Estates now stands. That temporary reprieve of at least some of the occasional excessive flow and tides has been further curtailed by infill at the Sandbank Marina. While these factors are not the sole causes of the overflow of the river, they do contribute to it. Such high waters have always been part of Dumbarton's existence. Before the raising of the land surface as a result of excavating the shipbuilding basins, Dumbarton Rock would sometimes find itself cut off from the mainland, island. New development now allows for such high water and the expected rising ocean levels as part of global warming. But some areas such as that of the Riverside Lane parking in central Dumbarton get soaked on a regular basis. 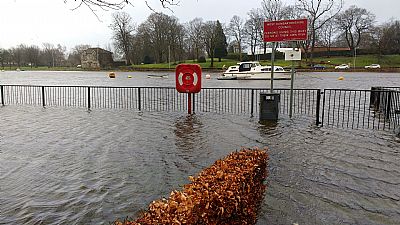 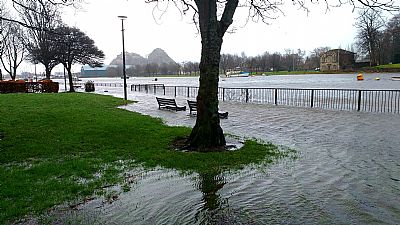