ACCESS : The River Clyde is accessible at various points along its length. See below.

The Clyde defines where we live. It has created our history through who arrived here and how. It has provided us with mobility and connectivity to other places. It has sustained our shipbuilding inudstry. It contains the southern edge of West Dunbartonshire even more absolutely than any other geographic feature has defined our other extremities. But today with mobility meaning travel by road or rail, it has stepped back in its prominance within our awareness.

By the time the legions of the Roman Empire had arrived, the river and surrounding area was held by the Brythonic speaking Damnonii tribe. The Romans built several forts on its banks of which that at Old Kilpatrick was the most important in the district and it was linked across Scotland with the Anotnine Wall.

The Kingdom of Strathclyde was established shortly after the Roman occupation of Britain as an independent kingdom and ruled from the impenetrable Alt Clut fortress, Dumbarton Rock. Alt Clut eventually fell in a siege in 870 AD, when a force of Norse-Irish raiders from the Kingdom of Dublin sacked the fort. The weakened kingdom moved its capital to Govan although did not recover fully and was annexed by Alba in the 11th century.

For a long time Dumbarton vied with Glasgow as the major commercial centre on the Clyde. Dumbarton was well placed, being reasonably sheltered as a port and with good connectivity between much of western central Scotland the the Atlantic. The Clyde began to be increasingly used commercially as trade between Glasgow, which had gained the upper hand, and the rest of Europe and beyond. Dumbarton though continued to prosper through its location on the Clyde.

With dredging resolving the problems of the shallow waters of the Clyde, shipbuilders managed to construct increasingly larger ships. Many shipbuilding firms became household names on Clydeside and around the world, including Denny of Dumbarton. Denny of course had utilised the sheltered tributary of the Leven, but that had direct connection with the mightier Clyde.

The River Clyde has been used for shipbuilding for hundreds of years, possibly from as early as the 15th century. By the 19th century, places such as Bowling Harbour, Denny's Shipyard in Dumbarton and John Brown's Shipyard at Clydebank were well established.

After World War II the shipbuilding industry and those industries dependent on it began to decline. Clydebank in particular had been targeted by the Luftwaffe and sustained heavy damage. The immediate postwar period had a severe reduction in warship orders, which was balanced by a prolonged boom in merchant shipbuilding. By the end of the 1950s, however, the rise of other shipbuilding nations, recapitalised and highly productive, made many European yards uncompetitive. Several Clydeside yards booked a series of loss-making contracts in the hope of weathering the storm. However, by the mid-1960s, shipbuilding on the Clyde was becoming increasingly uneconomical and potentially faced collapse. [Wiki]. 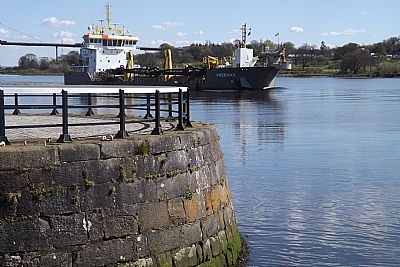 A coaster passes Bowling where the Forth & Clyde Canal links with the Clyde.

There is still an active harbour within West Dunbartonshire on the Clyde, the ROTHESAY DOCK at Clydebank, and fuel facilities at Dunglas, but the Clyde is not what it used to mean to us.

We now think of the Clyde as something to cross rather than a major transport artery in its own right. The Erskine Bridge does just that and takes us just a few short minutes to cross. Before it was completed the Erskine Ferry sailed across the River Clyde from Erskine to Old Kilpatrick.The ferry was also referred to as East Ferry of Erskine as there was another ferry to Dumbarton a few miles down river, known as West Ferry. It is reputed to be the oldest ferry crossing of the Clyde. The crossing was part of the A740 route from Paisley to Old Kilpatrick. It was established in 1777 and replaced by the Erskine Bridge in 1971.[Wiki].

But there is new interest in regaining the Clyde for West Dunbartonshire, perhaps not in the same way, but in new ways. It is becoming a fashionable place to live near and new industries are being attracted to it.

Quite where the River Clyde becomes the Firth of Clyde depends on your interpretation of the cultural and geographical distinction. Some people will sometimes refer to Dumbarton as being on the Firth of Clyde, while the population of Port Glasgow and Greenock frequently refer to the firth to their north as "the river". Either way Dumbarton can be seen as having direct access to the wider and more navigable firth. That enabled it to have its shipbuilding industry and with dredging created the potentials for the important shipbuilding industries upstream at Bowling and Clydebank. That may be a shadow of its former self, but illustrates that fairly large craft can navigate this stretch. It is unlikely that cruise ships will frequent this stretch, but that does not mean that we cannot tap into that market indirectly. If the main berthing point on the Clyde for cruise ships is across at Greenock, this raises the suggestion that there is an untapped market for bringing them into places such as Dumbarton by ferry or their own tenders. From there they can visit the town, the Castle and Loch Lomond - the trip across being part of the attraction.

There is one challenge though - tides.

But one craft that frequents the Clyde and makes no attempt to come in at places scuh as Dumbarton, yet has a very shallow draft, is the Waverley. Ife the Leven was once the place where fairly large ships were built and launched, the only hesitation now for its visits is that the river has silted and needs cleaning out of derelict craft. A floating pontoon jetty would easily accommodate it and its passengers.

Looking down on the Clyde from the Erskine Bridge.

A view from across the Clyde looking towards Dumbarton Rock with Dunglass Castle and the obelisk of the Henry Bell Monument on the right. 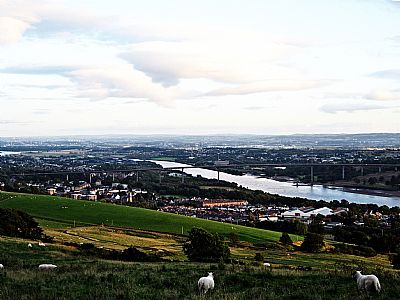 Looking south-west from the Kilpatrick Hills with the Erskine Bridge in the distance. 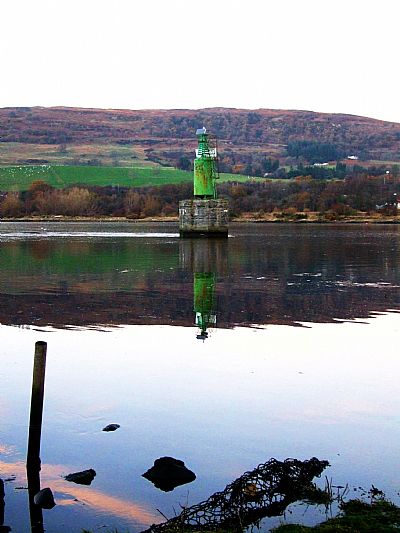 A navigational bouy near the Erskine Bridge. 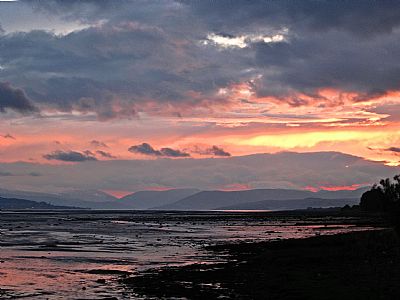 Looking west down the Firth of Clyde from the shores below Levengrove Park. 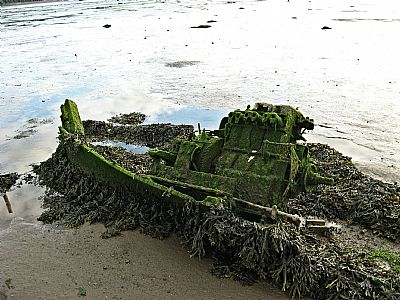 There are probably many ship wrecks in the Clyde mud. This small one seems to have been overwhelmed by that proportionately large engine. 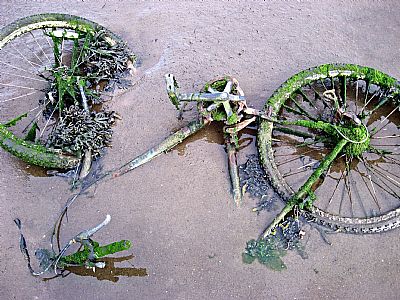 It is not just boats that you find in the Clyde mud.