In an area of paved social space bound by the Clydebank Shopping Centre and the Forth and Clyde Canal is a traditional bandstand.

It was built by the Lion Foundry of Kirkintilloch and originally located in Dalmuir Park The park had been created on land bought with funds donated by Lord Overtoun in 1906. The bandstand was gifted the following year by the MP, Mr J Dundas White. It did not stay there, but was moved to Whitecrook Park in 1935 and eventually to its current position in 1983. (A new bandstand was built in Dalmuir Park; a small stage).

It may be a little to one side and no longer in the limelight, but it still contributes interest to the setting. Bandstands were an integral part of life for generations. They were an important way of enjoying music and other entertainment for most people before we could simply flick the switch of the wireless. Even that has been long overtaken by portable music in small gadgets that have become second nature to most of us. Many a young person reading this may even have to think a moment about what is being suggested here. The provision of entertainment is so very different from when this bandstand was erected. Yet that means that such features are all the more important. 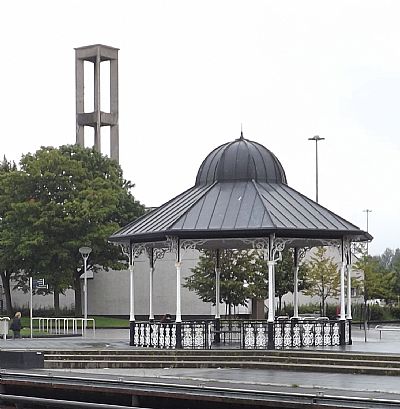